These types of clips are popping up so frequently these days, it’s almost not even shocking to see anymore. But, this video posted yesterday on YouTube shows a heavily armed US Marshal charge a woman who was photographing a group of officers. The Marshal grabbed the phone out of her hand, then proceeded to kick and smash the phone as it hit the ground. The entire group of law enforcement officials appear to have then walked away from the startled woman.

The woman in the video does appear to be speaking to the officers, most of whom seem generally uninterested in what she has to say. I couldn’t make out all of her statements, but the woman is heard repeatedly telling the officers she “has the right to be here”.

We’ve contacted the Los Angeles Sheriffs Department asking for details of the event; however, at the time of publishing they have yet to respond. We will keep you updated as we hear new information. Upadte: It is now being reported the law enforcement official in question was a member of the US Marshals, not the LASD. This post has been updated to reflect the new findings. 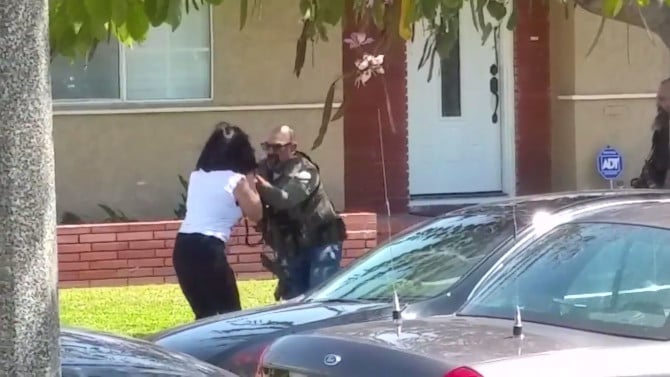 I’d also like to personally thank Photography Is Not A Crime for so helpfully pointing out in the post which broke this news, the importance of holding your phone horizontally when recording video.

“… she did a great job of recording considering she held the phone sideways to obtain the horizontal video, which is much more superior than vertical videos, even though many citizens don’t seem to see this…”

Not to make light of a very serious situation, (though I admittedly–and probably a bit too self righteously–smiled at the PSA), but the fact the blogosphere is now just as focused on proper cellphone recording techniques of these types of situations as they are on the offense itself, speaks greatly as to just how popular it is becoming for law enforcement officials to overstep their boundaries. To quote PINAC, “hopefully that is changing” too.

A man smashes high-priced sculpture because of a selfie

« 18 Jaw Dropping Photos That Celebrate The Natural Beauty Of Breastfeeding Mothers
Canon 6D Mark II Rumored to Be Coming, But Not Before The 5D Mark IV »