When I get angry, I like to break things.  When I get very angry, I like to smash them to smithereens.  It’s like therapy – stuff-shattering therapy.  Granted, this hasn’t happened in a while…perhaps all that self therapy paid off in the long run.  But, regardless, I can identify with the urge to smash the crap out of anything that’s not working.

That is why I have empathy towards photographer and serial vlogger Casey Neistat who yesterday released a video in which he demolishes a Canon EOS 70D that was being temperamental and kept flashing the dreaded “Movie Has Been Stopped Automatically” error, prohibiting him from continuing to record. 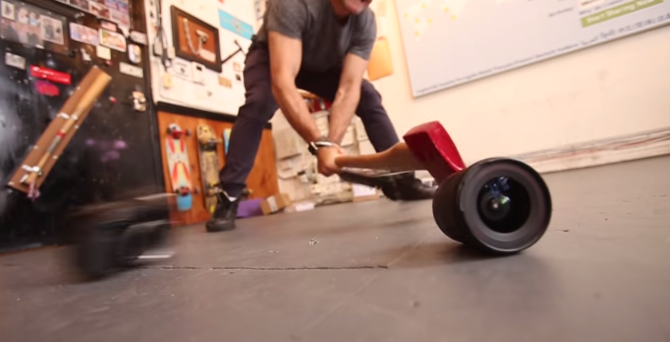 I’ve experienced this error before, and, as various online voices have stated, it was probably due to the card he was using rather than the camera itself.  While some claim that it’s because he was using a Transcend card instead of an oh-so-capable SanDisk, I can testify that I once had a brand new, just-formatted 32GB SanDisk Extreme card pull the same thing on me while filming behind-the-scenes footage for a shoot I was working on.  Frustrating indeed, so I highly question the claim that it was because of a particular brand.  Did I smash a camera when that happened?  No, but I did get the sudden urge to race online, post mountains of negative reviews, and scream at the seller demanding a replacement.  (Fortunately, I was nowhere near an Internet connection at the time.)

“movie recording has stopped automatically” – worst bug ever, the camera had to be destroyed

I assume it wasn’t much (if any) of a financial loss for Casey, so I really couldn’t care less whether he demolished the camera or sent it to a day spa in the Hamptons.  What I find hilarious about this video is the way that Casey, who has a habit of absent-mindedly leaving $13k-worth of camera gear in taxis, keeps referring to his video as a “movie.”  In the strictest sense of the word, I suppose he could be considered correct.  But a haphazard video of himself talking into a camera for a daily vlog is hardly something I’d spend my time to go see at a local film festival.  Potato, patahto, I know…but still.

Yet, despite this small setback, Casey was able to finish his “movie” and share it to the world for people to complain about and pick apart…so, if you think about it, I’m only fulfilling my cyber-given obligation.