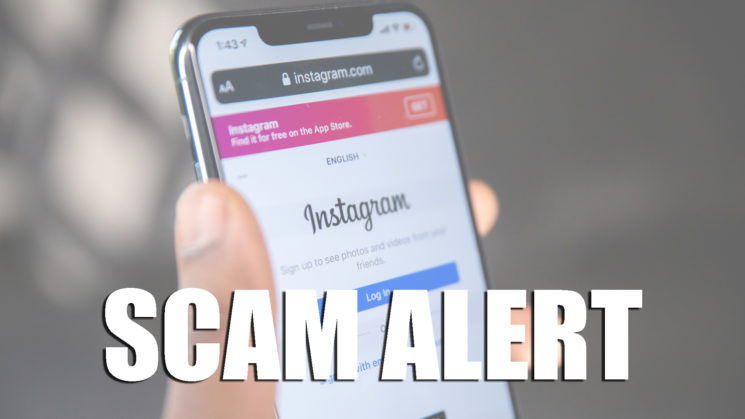 There’s a new, highly elaborate, and even well-paid scam going around on Instagram. Some users are reportedly taking advantage of Instagram’s anti-impersonation, suicide, and self-harm policy. For $60, they will pretend to be someone else, report them for impersonation, and then “help them get back on Instagram” for $4,000.

According to a report from Motherboard, some people even advertise “professionalized ban-as-a-service offerings.” Some of them are, at the same time, connected with services that restore accounts for users who are banned from Instagram, or they even offer these services themselves! So basically, they will help to ban you, and then they will take a few thousand bucks to help you get back.

A user offering the ban service named “War” told Motherboard that banning “is pretty much a full time job lol.” They charge $60 per ban and claims to have made over five figures from selling Instagram bans in under a month. When asked about why people do it, War said they didn’t know, but they are “obviously individuals who have money to throw around.”

“Maybe it is their ex or they have/had a grudge with them. Maybe ruining their business, maybe getting paid even more from a third party.”

Judging from the report, scammers use different methods to get you banned. Probably the creepiest is the one War described to Motherboard as the one they use:

“I use an impersonation method where I get my verified IG accounts and change my profile to look exactly like the target’s bio, name, profile photo etc. I report them for impersonation once and boom, they are gone.”

Other methods include someone fraudulently reporting your account for suicide or self-injury. Whichever method they use; scammers will often message you right after you’ve been banned with an offer to help you restore your account. According to one of the screenshots obtained by Motherboard, it costs between $3,500 and $4,000 to restore.

One of the victims confirmed that some accounts that offer bans and those that help you restore your account are connected. In their case, the two accounts that launched the ban attack and the one offering the restore service follow each other on Instagram.

We will contact Instagram for more information and update the article if we hear back. In the meantime, Instagram told Motherboard that “it was investigating the sites offering ban services.” The company added that “it will itself ban people from Instagram who repeatedly break the site’s guidelines.” Instagram encourages you to report people if you suspect they are involved in these kinds of scams. Lastly, it points to its own support page that you can follow to restore your disabled account.

From the experience of people I know, all of this rarely helps. I know a few fantastic accounts that were been banned literally for no reason, meaning that someone had fraudulently reported them. At the same time, when I report accounts that post sexually suggestive photos of girls without their consent, they remain online, and new ones just keep popping up.

I think that this is something Instagram should investigate more deeply and really pay attention to. And sadly, what I read between the lines of their response to Motherboard is: “We don’t care, you’re on your own.”

Taking part in Instagram giveaways? Beware of this phishing scam