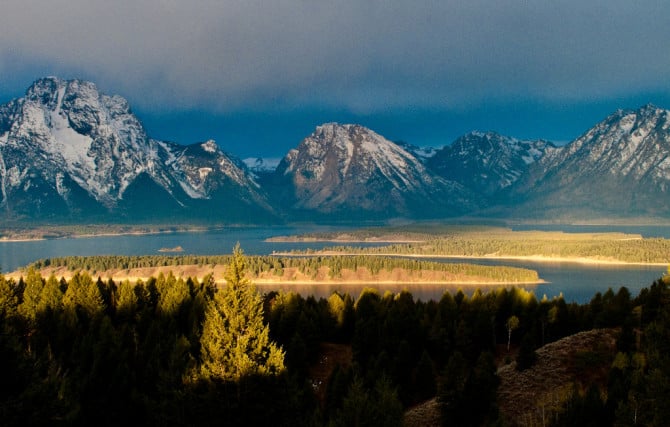 Wyoming is unquestionably a gorgeous state and one that’s coveted by landscape and wildlife photographers around the world. With Yellowstone National Park, the Grand Tetons, or one of the other vast and countless parks, it’s one of the United State’s more untouched states, providing photographers a wide offering of natural backdrops to photograph. However, according to a report published by Slate, a new bill (SF0012) has gone into effect which may have some photographers facing up to five years jail time.

“photos are a type of data, and the new law makes it a crime to gather data about the condition of the environment across most of the state if you plan to share that data with the state or federal government.”

The law, titled ‘Trespassing to collect data’, states that any individual collecting data (photographs included) on open land without written or verbal permission to be collecting data is punishable by $1000 fine, up to one year jail time, or both. Repeat offenders would face a fine of up to $5000 and/or a jail sentence of up to 5 years.

What this means for photographers is even though you may have permission to be photographing on land, unless it is specifically stated that you are allowed to take photographs as a method of documenting environmental resource data, should your photos make it back to a state or federal government agency, you have broken the law. The example Slate provides has a photographer taking an image of the sunrise over Yellowstone, not a big deal, thousands of those photos exist. But, if that photographer happens to really like his photo and submits it into a contest being offered by the National Weather Service, said photographer is now technically a criminal under the new law.

Another hypothetical example would be if you were out photographing wildlife on open land and were granted permission to be doing so, but then saw someone pouring some kind of chemical into a nearby stream and photographed it as evidence to turn into federal authorities, technically you could also be facing jail time.

According to Justin Pidot, an assistant professor at the University of Denver Sturm College of Law, who penned the Slate article:

“The new law is of breathtaking scope. It makes it a crime to “collect resource data” from any “open land,” meaning any land outside of a city or town, whether it’s federal, state, or privately owned. The statute defines the word collect as any method to “preserve information in any form,” including taking a “photograph” so long as the person gathering that information intends to submit it to a federal or state agency. In other words, if you discover an environmental disaster in Wyoming, even one that poses an imminent threat to public health, you’re obliged, according to this law, to keep it to yourself.”

Pidot cites the motivation behind the new law as a way around enforcing laws which would require cattle ranchers to restrict how often their cattle grazed near streams, which can cause the spread of e. coli. According to Pidot, the ranching community in Wyoming is very large and has a lot of politically pull. He is urging the U.S. Department of Justice to bring forth a lawsuit which would rule the new Wyoming law unconstitutional.

Of course, the situations presented are all hypothetical and it remains to be seen just how the law will be enforced, but it’s important to be informed on such laws rather than learn the hard way.( Not to mention, the obvious concerns raised by this particular law that falls outside of photography.) You can read the bill in it’s entirety, here.