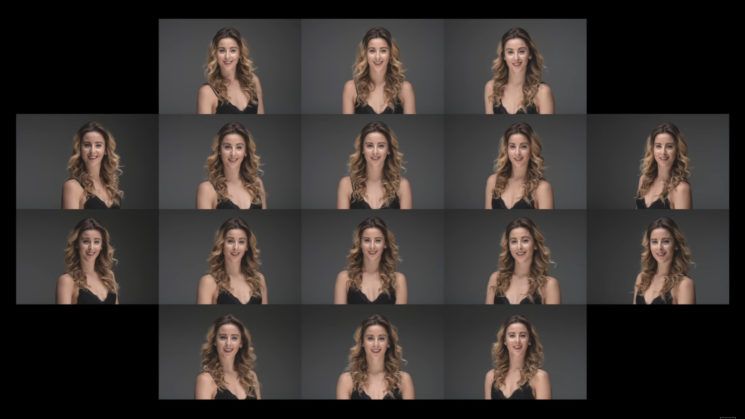 Ed Gregory at Photos in Color makes a pretty bold claim in his new video. It’s titled “Why this is the perfect PORTRAIT PHOTOGRAPHY angle – Proven by SCIENCE”  The exact angle for perfect headshots every single time. It’s a shame that this video from  has such a misleading and clickbaity title, because it does have some good information in it.

The “perfect” portrait and angle is going to vary a lot from photographer to photographer. It’s a very subjective thing. What we like is what we like. It’s also going to vary greatly depending on the person sitting in front of the camera, too. Facial structure, build and demeanour plays a huge part. There is no one rule to… um… rule them all. But do have a watch of the video anyway. Just ignore the “science” bit.

Ed’s “method” used to shoot each of the images is quite sound.

First, the lights are positioned in a traditional clamshell setup. The big soft key light is from above, and the light below fills in the shadows. Although, even this setup is subjective. Personally, I think the overhead keylight is a little too high. There’s not a lot of light getting into the eye sockets, making them appear darker, and there’s no reflection in the eye itself. There is a pretty strong reflection from the “fill” light strip softbox below, though. 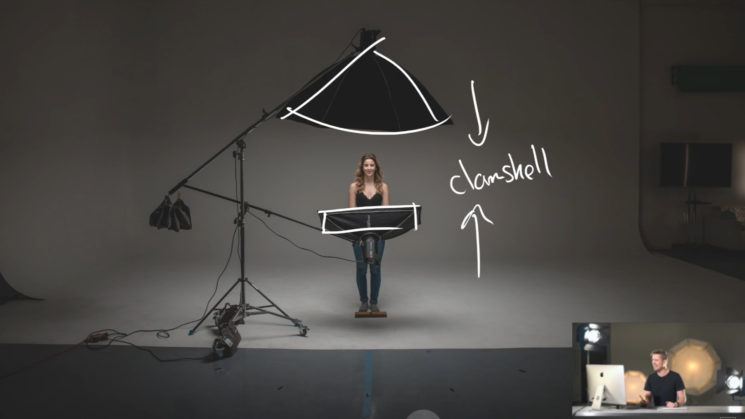 But, we’re not here to judge Ed’s personal tastes. If this works for him, then awesome. It’ll be the same for all of us. We’ll all have our preferred lighting setups that we like to use for headshots. And not everybody’s going to agree with them. That’s just fine. Just go for a lighting setup you like, set it up, and stick with it through the rest of the comparison. 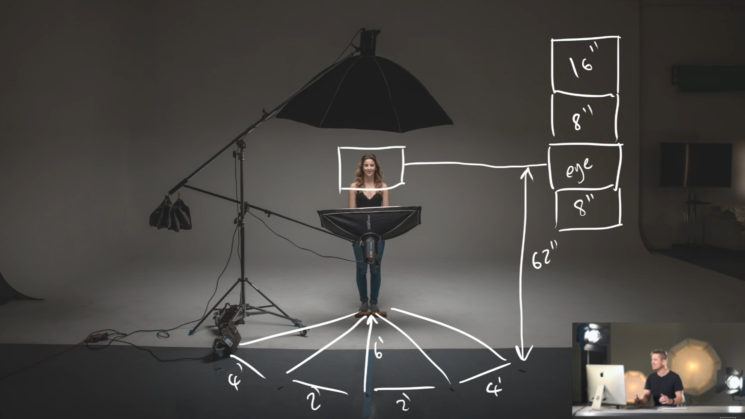 After sorting your lights, it’s a case of moving the camera around your subject. For this test, Ed shot in landscape orientation, with the camera 6ft from the subject for each shot. He laid down an arc on the floor, and had his off-centre positions at 2ft intervals. Ed also shot from each position at 4 different heights. 8″ below eye level, eye level, 8″ and 16″ above eye level. The resulting images were then placed in a grid for easy reference. 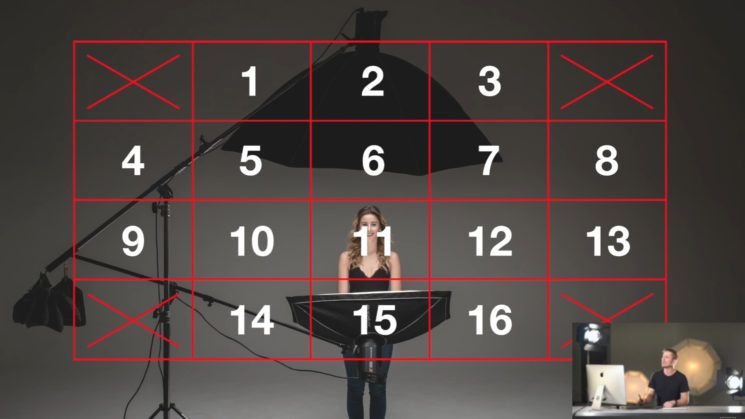 The images are shot with a Nikon D800 with an 85mm f/1.8 lens. This too, though, is also a subjective decision, based on the gear you already own. You might be shooting a crop body, or medium format. You might prefer a closer look, or to shoot from a distance with a narrower field of view. But, the comparison is still a good one.

This is the range of images Ed shot at each of the numbered positions 1 through 16.

At around 6 minutes into the video, Ed starts to talk about some of the flaws with this “scientific” comparison. For a start he’s using a living breathing subject. The mood and expression is slightly different in each photo.

During the analysis of the images, Ed talks about a number of favourable points in the different images. There’s no real objective review at all. He pretty much negates the whole “science” claim by saying that it’s all his personal opinion. And my favourites weren’t the ones that Ed picked as his favourites for this lighting setup.

While there isn’t all that much about this comparison that’s scientific, it’s a good exercise. It lets you see your subject from different angles. It shows how their posture changes and how the light interacts with them differently.

It’s a good test for you to do yourself with your preferred lighting setups to see which shots you like the most. Even when you do come away with some angles that you like, though, they’re not going to work for everybody. And if you try multiple different lighting setups, you’re probably not going to prefer the same angle for each one. Each will give a very different mood and feeling to the image.

It will give you some good starting points for the future, though. But science? Nah.

Five tips for getting the perfect angle for portraits