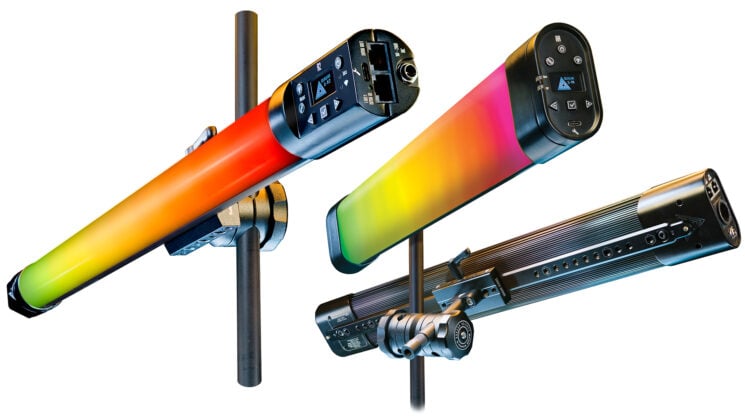 Lighting manufacturer Quasar Science has announced the availability of their newest Rainbow Series RGBX LED lights, the Rainbow 2 and the Double Rainbow. These tubular LED lights create what Quasar Science describes as “intense, realistic lighting with multiple individually controllable pixels” to deliver both high quality white light as well as well saturated colour that can fit into small spaces.

The Rainbow 2 comes in 2′, 4′ or 8′ lengths featuring 10, 24 or 48 pixels respectively. The Double Rainbow is, as the name suggests, a doubled-up Rainbow light with two rows of pixels in 2′ and 4′ lengths for either 20 or 48 individually addressable LEDs. Unless I’m missing something, though, it looks like they were first announced way back in December 2020 but are only just coming to market now – perhaps due to their acquisition by Vitec last year.

The Rainbow 2 and Double Rainbow, Quasar Science says offer “a color engine that produces dramatically more accurate colors and control” using Quasar’s RGBX Spectral Science Color Engine (or “RGBX SSCE”, as they call it) with “more than one quintillion diode combinations” for more than a billion total unique colours. It’s an impressive claim and given Quasar Science’s reputation and prices, I probably wouldn’t doubt them.

The RGBX Spectral Science Color Engine (SSCE), provides artists with the lighting industry’s most advanced – yet simplest – color controls to use as their lighting paintbrushes. SSCE’s Correlated Color Temperature (CCT) control increments give the minimum Kelvin transitions needed at any CCT based upon Just Noticeable Difference (JND) calculations. This psychophysics concept enables the smoothest and most even CCT control on the market.

Quasar Science CTO, Ben Dynice, says that they’re designed to provide “the entire array of filmmaker needs, from small independent setups to big studio lighting systems”. The wide array of potential uses is also suggested with the quantity of different wired and wireless control protocols it supports, including DMX, CRMX, W-DMX, Bluetooth, sACN and Art-Net. It also features a built-in RJ45 ethernet socket, allowing them to slot into just about any networked lighting setup you might already own without having to buy any extra gear.