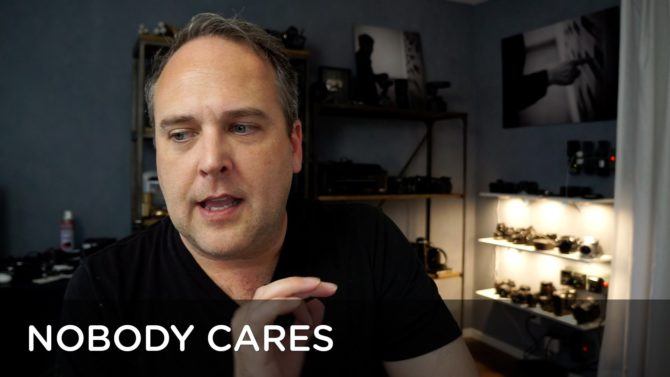 I like Ted Forbes, I really do, and I’ve been following his videos for about five years, but this is a difficult one for me to wrap my head around. Part of me agrees with him completely but another part of me vehemently disagrees, because it all depends entirely on context and one’s goals as a photographer.

Ted’s recent video on the Art of Photography YouTube channel does make some very good points, though, regardless of whether you agree or not, or even if you feel it doesn’t apply to you or your work.

In the grand scheme of human civilisation, he’s right.

The world absolutely needs art that matters, whether it’s photography, paintings, sculptures, music or anything else, but not everybody’s trying to, or even wants to change the world.

I am an owner of several guitars (note, I did not call myself a “guitarist”). I got into it as a kid, I don’t think I suck at it too badly and I still pluck away now and again, but I do it completely for myself, for my own enjoyment. I know I’ll never be Slash or Steve Vai or B.B. King, but I’m not trying to be.

I’m never going to compose a masterpiece, I’m never going to play anything of particular importance, and I’m certainly not going to be performing sell out gigs at Wembley Stadium. But why should I feel that I have to? Why do those need to be my goals?

I think the same is true of photography. Not every camera owner is a photographer, nor even wants to be. Most of the images being created today aren’t being created as “Art” or to change the world, but simply for ourselves and our friends to document important (or silly) events in our lives.

Nobody is interested in seeing your photographs. Nobody cares about the work you’re doing as a photographer.

Ted’s right that the world at large really doesn’t care what we produce or how we’re producing it, but even if we do class ourselves as a photographer (as opposed to camera owner), if we’re only producing work for ourselves and our friends then I don’t think that it really matters.

Even if it’s your profession, you will have people who are interested in seeing the photographs, and care what you do as a photographer. They’re called clients, and they’re the ones who are paying you to create it, but they’re not asking you to change the world, just their world.

I might also argue that while the photographs most of us produce may not be artistic masterpieces, they can serve our culture just as importantly.

Take, for example, the 1,200 rolls of undeveloped film we posted about a few days ago. While probably not the best way to describe them, I noted that the sample photographs shown in the video that had already been developed didn’t appear to be “anything special”.

I was speaking from an entirely photographic point of view, and in that context I don’t think they are. Culturally, however, these photographs are special and provide an insight into the lives of people the 1950s that “Art” cannot, which I feel is just as vital.

With each roll containing probably at least 10 images (assuming there were no crazy super-panoramic cameras used), that’s 12,000 or more images documenting what this photographer saw around him every day. That being said, there is a bit of a difference now, though.

In the 1950s, photography was a bit more selective about who it allowed to participate. Cameras and film were expensive, relatively few could afford them. 12,000 images from one photographer was a pretty substantial number, probably equivalent to Pete Souza’s 2 million photographs of the President, today.

These days, everybody has a camera of some kind or another, and more photos have been created in the last five years than in the hundred years that came before it. With 80% of the world thinking their photos are “excellent“, perhaps he’s right, especially when over 136,000 photos are uploaded to Facebook every minute (and that number was from way back in 2012).

But, just as I don’t try to push myself with the guitar, some people will never push themselves to improve their photography, because it’s just not that important to them.

Is Ted right? Are you trying to change the world with your photograpy? Preserve our culture? Create “Art”? Are we wasting our time if we don’t strive to achieve those things? Let us know your thoughts in the comments.

Wondering who likes your photography? Who cares!

The photography teacher that nobody wants

Ten things nobody told you about landscape photography