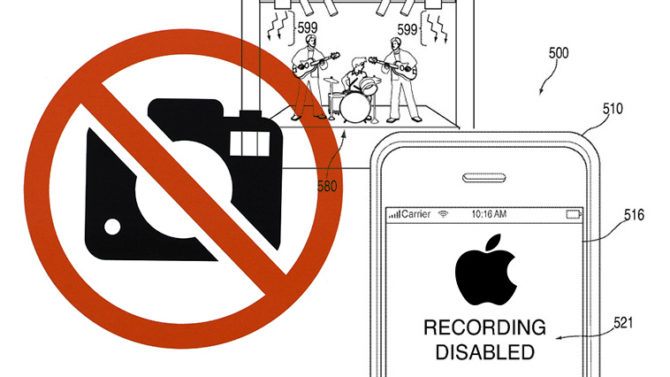 With great power comes great potential for abuse. Back in 2011, Apple filed a fairly controversial patent, which would allow the cameras in their devices to be turned on and off at will by external forces. In theory, this would allow locations and venues that have “No photography” zones to enforce this rule more passively.

Aimed presumably at concerts, cinemas, museums, private company areas and the like, it comes across a feature for good. To help protect one’s rights and intellectual property. On the flipside, however, people are worried that this technology could also be used to prevent freedom of speech and freedom of the press. 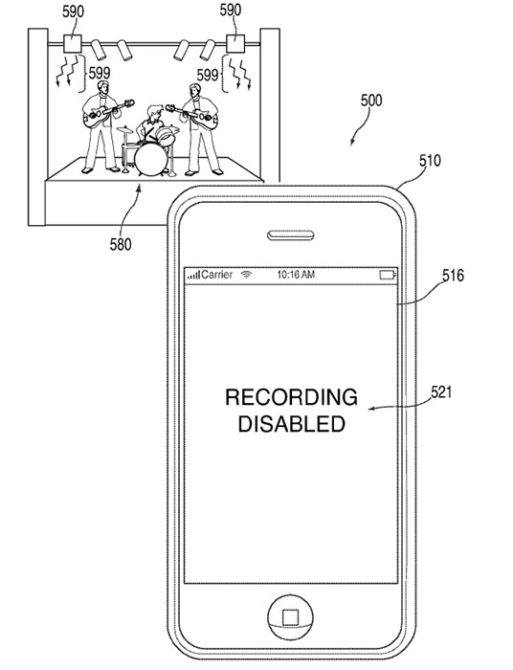 In a nutshell, it works with an infrared transmitter installed at a location that sends out encoded data. This data is then picked up by your phone and processed. Depending on the situation, the phone may then temporarily disable its camera, with a big warning popping up on your screen telling you as much if you attempt to shoot a photo.

It’s a completely understandable desire for certain venues to want to prevent photography from taking place on their premises.

One feature of the patent which actually looks pretty cool is the ability to overlay information and present the user with other information and options to find out more information about the scene they’re presented with.

For example, while a museum may ban photography, the same technology that would disable the phone’s camera could also prompt the app to display more information about the artefact the camera was pointed at. 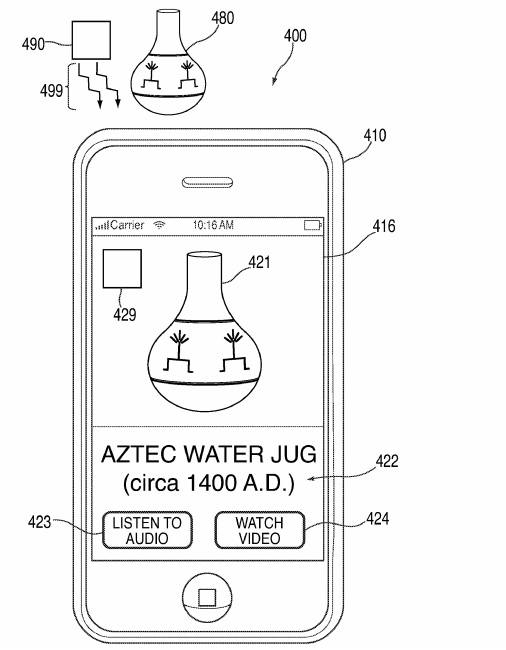 This is treading a little more into the world of “augmented reality”, and similar tasks are achieved today through the use of QR Codes, but this could be a neat way to present information to museum visitors, or even to teach.

Of course, it also opens up the doors for yet more invasive advertising. If I was in the middle of town, for example, and I wanted to grab a quick shot of something going on, I wouldn’t want to pull up my phone and be bombarded with adverts for the surrounding shops because it received some infra-red ping about cheap holidays or a sale going on somewhere.

That’s where the problem really lies with this. If the blocking and overlay technology became so readily available to venues, allowing them to control our phones and their cameras, then it can just as easily be used to prevent freedom of speech and freedom of the press.

Anybody who could get hold of such a device would be able to prevent you from taking photos or video any time, any place and even put their own content straight onto your screen. In fact, if this became a reality, I could see it being reverse engineered and Raspberry Pi based clones being made within a week of the technology hitting the streets.

On the bright side, perhaps it might also help to limit the number of “drunken bathroom selfies” that seem to pop up on our Facebook feeds on a Friday night.

All that being said, it’s just a patent. Many patents get filed and never actually see the light of day in the real world.

But, if it does happen, we might’ve just discovered another one to add to the list of uses for gaffer tape. Covering up the IR receiver on your phone.

Do the positives of this idea outweigh the negatives? Or vice versa? Do you think Apple will even start to implement this? Let us know what you think in the comments.

« Nobody cares about your photography
Making and framing a fine art print; What photography is all about »