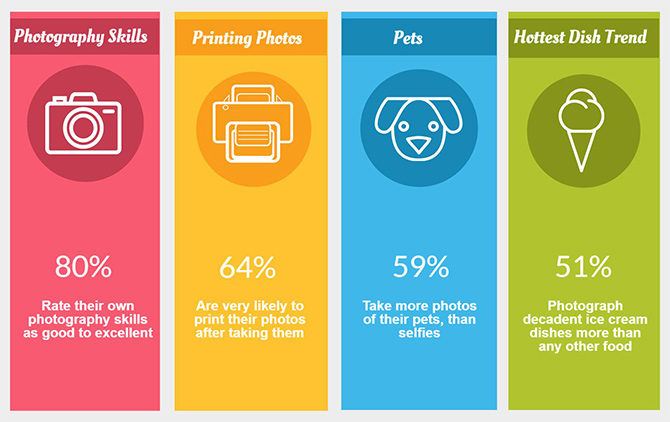 It turns out that May is National Photography Month and to celebrate, Canon USA have revealed a few current consumer trends in the world of photography.

Consumers are showing more confidence behind the camera than ever, claiming that 80% of them rate their photography skills as “good to excellent”.  It certainly goes some way towards explaining why the general public tend to undervalue professional photographers.

As more and more images are being uploaded to social media, the desire to capture, share and save memories is clearly on the rise with 24% of consumers saying that they shoot up to around 300 photos per month.

64% of those surveyed indicated that they are either “likely” or “somewhat likely” to print their photos after taking them.  Personally, I think that particular number is a bit optimistic, with many probably having the intent to print, but just never getting around to it.

32% say that are using the images to create scrapbooks or photo books, and a quarter are using their prints to decorate their homes.

America is definitely a nation of animal lovers, with over 59% of respondents taking more photographs of their pets than they are selfies, and almost two-thirds (64%) report taking photos of their family and special occasions more than anything else.

Interestingly, photos taken at the gym only account for a mere 16% of consumers.  I’m sure the number of gym-selfies I see scrolling up my Facebook feed is higher than that.

The old classic that never seems to go away, especially when it comes to sites like Instagram is #food photography, and with more than 194 million images hailing that particular tag it isn’t showing any signs of slowing down.  More than half (55%) of consumers take food photos to show off a personal creation or new recipe, and 27% admit they share photos of food to brag to friends and family.

The Canon 2016 Photography Trends Study was conducted online with 1,004 adult U.S. general population respondents. The survey was conducted by Toluna, between the dates of April 21 – 26, 2016.

A result I thought was particularly interesting was that 62% of respondents said that they believe their photography has gotten better over the last two to five years.  Well, one would certainly hope so.

I’d be more worried about the 38% who’ve been snapping their “up to 300 images a month” for the last two to five years and not seen a single bit of improvement, but maybe that’s just me.

« Photographer explains how to create and shoot wet plate photography
Rant: Tripod makers, please don’t force us to carry coins in our bags »