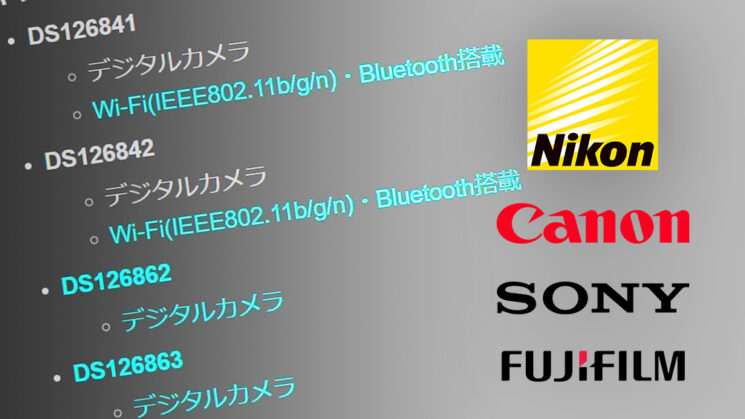 Well, it looks like there’s a flood of new cameras about to come in from Canon, Nikon and Fuji, along with a number of lenses from Canon and Sony, a new speedlight and a Nikon memory card – which I’m guessing is going to be CFexpress. According to Digicame-Info, a screenshot posted to “a huge bulletin board” lists a number of products from the four manufacturers.

Canon lists six digital cameras, 2 photography lenses, 2 cinema lenses (technically one lens in two mount options) and a speedlight. Nikon adds two digital cameras (one with wifi and apparently one without) as well as a memory card. Sony is apparently gearing up to announce an FE 24-70mm f/2.8 GM II and Fuji also has a new camera listed.

As far as Canon’s digital camera numbers, two of them list built-in WiFi and Bluetooth, so I think we can expect those will be new mirrorless cameras. With rumours resurfacing of a high-resolution mirrorless body to replace the obsolete 5DS/5DSR models, one of them might possibly be this. The photography lenses are currently unknown, as is the speedlight (although I hope they don’t do that gimmicky auto-changing-angle thing again), but the Cine lens appears to be a full-frame 20-50mm T2.4 lens in both EF and PL mount flavours.

For Nikon, two cameras. With their full-frame lineup now pretty much complete between the Z5, Z6 II, Z7 II and Z9, could we finally be seeing some movement on their APS-C lineup? With the D500 recently discontinued, there’s definitely a big need for a replacement to that 2016 speed demon! I think it’s a pretty safe bet that the “memory card” will be CFexpress. Nikon already had their own branded line of XQD cards, so it makes sense they’d make that shift.

Whatever Fuji’s releasing… I’ve no idea. Place your bets below!