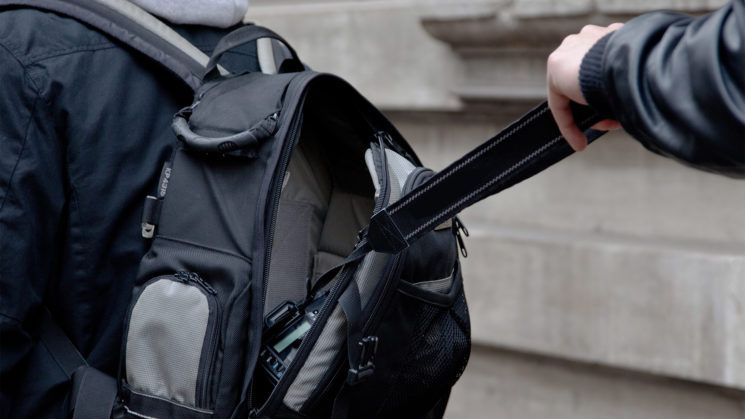 A few weeks ago, my camera was stolen out of my studio locker at school. I am an architecture student in college, so I keep my a lot of my stuff at my studio. Anyway, I put my camera in my locker for about 2 days without having to use it. When I finally decided to pull it out 2 days later, I noticed that it was missing. I called the campus police and someone came over to take a police report. They asked me questions like, “when did you last see it?”, and “do you know if anybody you know would take it?” etc.

The last question that they asked was if I remembered what the serial number was. They said that places like Pawn shops have to report the serial numbers in case people sell stolen items to them. Luckily I had semi-recently bought the camera, so I called the store were I bought it from to ask if they knew. They checked their records and pulled up my cameras serial number. I told the police and they wrote it down.

A few weeks pass to last night when I check my voicemail. The campus police apparently called me and left a voicemail earlier that day and said that they found my camera in a nearby pawnshop. They said they found it via serial number. I was really relieved that I called my camera store for that serial number.

Since this happened, a lot of people are saying to start some sort of spreadsheet with all of the information of your high dollar items. I think that this is a wonderful idea as every little bit of information helps the police in their search.

TL;DR-Remember or write down your camera’s serial number in case it gets stolen. Police can track it to Pawn shops.

Editor’s Note: Some equipment manufacturers, such as Nikon, will allow you to enter the details of your equipment, including serial numbers, into their website. For cameras, the serial number is often stored within the image files it creates, too.

My advice is to grab a quick snap of a new item’s serial number with your phone as soon as you receive it. Not just cameras but any high value item. Lenses, flashes, anything. Keep them all safe, and backed up online because if the computer containing them all gets stolen, you’re screwed.

If your equipment is stolen, after calling the police, you can use websites like Lenstag and Stolen Camera Finder to help recover your missing kit.