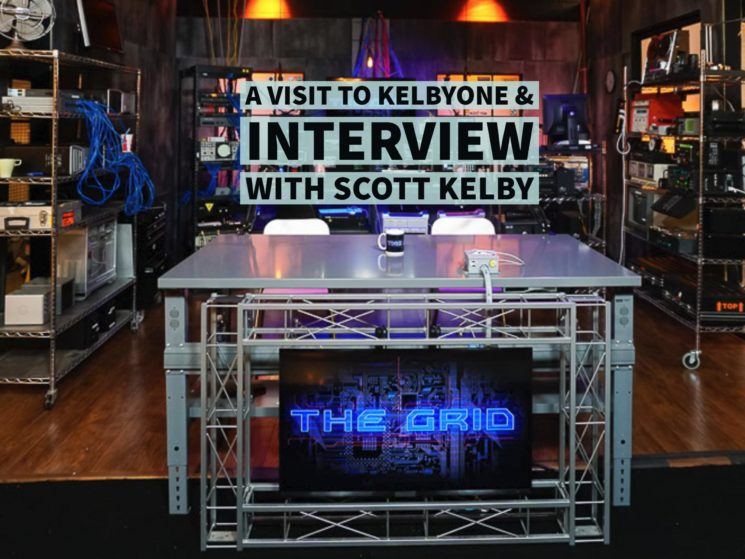 I recently had the chance to visit the KelbyOne offices and studio space near Tampa Bay, Florida and sit down with President and CEO Scott Kelby for an interview.

I have always been a big fan of Scott’s concise, open and honest approach to photography education.

My first Kelby book was the The Adobe Photoshop Lightroom 2 Book back in 2008 (which I still refer to once in a while) and I regularly follow Scott’s Photoshop Insider blog and catch The Grid when I can.

I’m even more impressed after touring the KelbyOne space and finding out more about what goes on behind the scenes to produce all of that KelbyOne content and Scott’s approach to photography education. 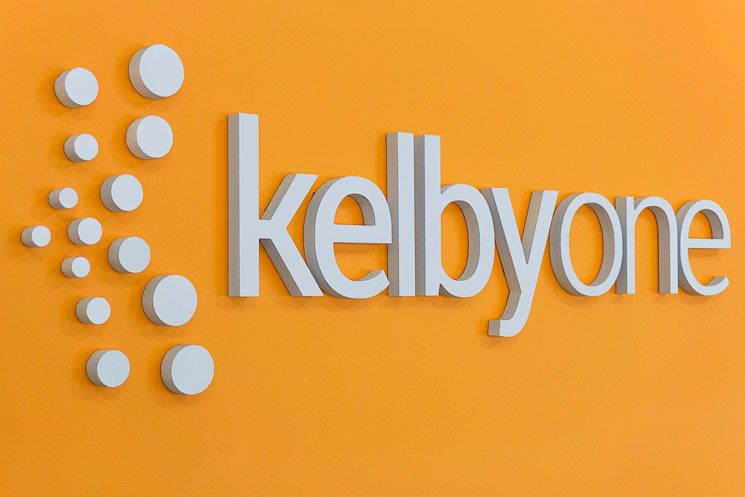 If there is one thing that is the most impressive feature about the KelbyOne facilities, it is how multi-functional the space is.

If you took everything you ever dreamed of from your average photographer’s basement studio and multiplied it by a million – that is essentially the KelbyOne space.

There is a gallery for showcasing local talent, the work of featured KelbyOne instructors and members (read more about The Gallery at KelbyOne here), a fully provisioned photography studio, numerous sets for filming the many KelbyOne exclusive webcasts and public shows (including the set for The Grid), and a storage room that would make anyone who has to cram all of their gear into a broom closet jealous. There is also a theater for live performances, and of course a ready-to-rock stage with a complete drum kit, concert lighting and everything.

Here are a few of the photos I captured on the tour. 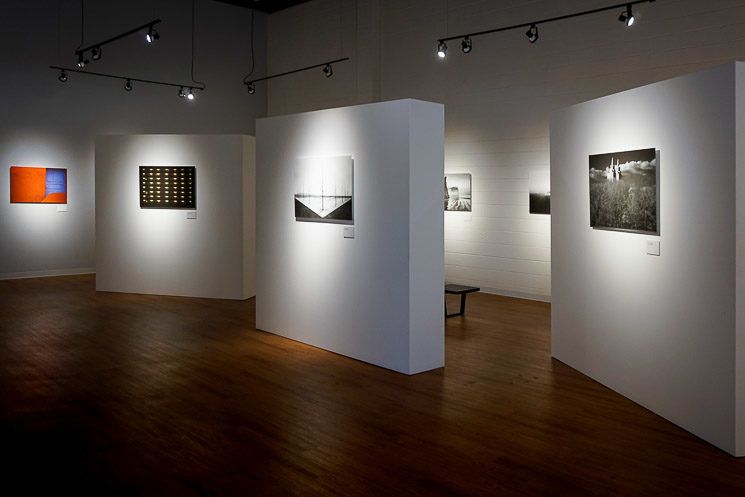 The Gallery at KelbyOne 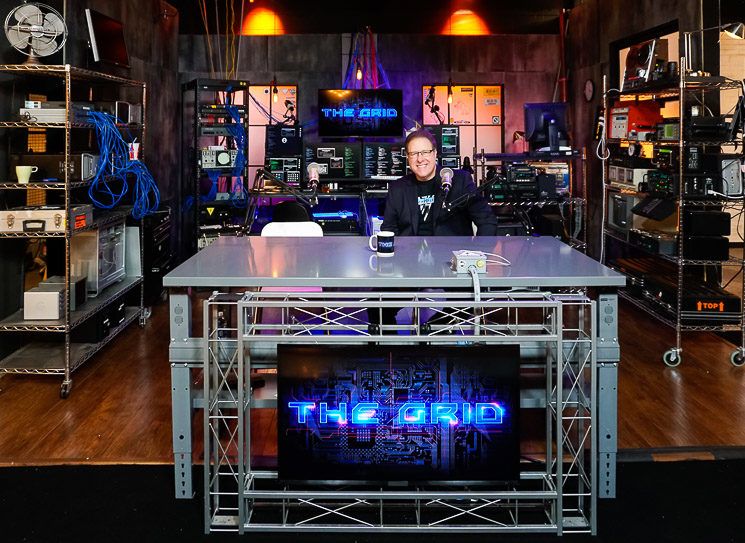 The set for The Grid! 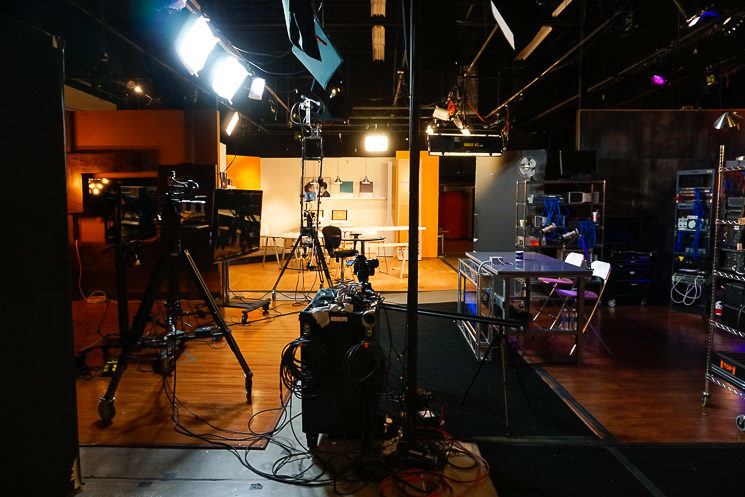 Behind the scenes on the KelbyOne studio set. 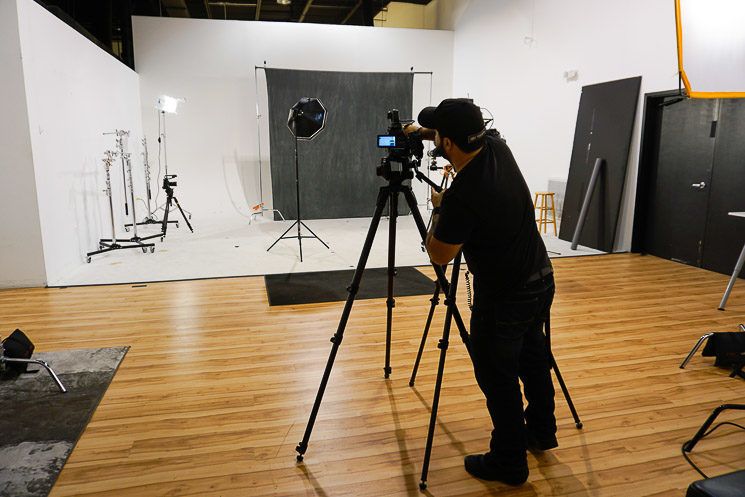 After taking me through the KelbyOne space I had the opportunity to sit down with Scott for an interview.

The following are excerpts from my question and answer session with Scott Kelby:

KelbyOne is one of the world’s most popular places to learn photography (and video). What is the most rewarding aspect of being the President & CEO, and the most challenging?

KelbyOne is education first. All of our classes are member driven – we survey our membership and develop content based on their feedback. The best part is unsolicited responses from members saying things like “I’m doing the thing I’m supposed to be doing”. I do twenty to twenty-four seminars a year and I get to speak with a lot of people one on one. I get to see that we’re teaching people to do things they never thought possible.

What’s challenging is there is so much free content to compete with. We offer education – not tutorials. I want KelbyOne to be a training company that I’d want to join – so to compete in the education space we have to constantly reinvest and offer our members an extra special experience. We have only the best instructors who are the best in the world and we try to make learning fun and engaging. All of our instructors love what they’re doing.

In the online age people can be notoriously negative online. How do you manage the KelbyOne brand?

Most of our feedback is positive and our membership community is very positive. We work very hard to foster that.

Negativity hurts – when you work so hard at what you do – it can ruin your day.

We try to show our members that membership is valuable – my job is to get people results, my job is to give them success – and when they’re successful they’re usually pretty happy about it.

The modern practice of photography (and video) is evolving quickly. How do you see the photography/video industry evolving in the next five to ten years across business, technical capabilities and artistic preferences?

Right now every camera has an Achilles’ heel – you’re lucky to find something that meets eighty percent of your needs. Over the last few iterations of cameras we’ve only seen incremental improvements – but sooner or later the camera manufacturers will pull it together.

Copyright is a problem but it’s an education problem. Only designers and users at larger companies take it seriously and metadata and other controls only matter if you care.

It’s so hard to say what might happen a year from now – five or ten years is a long time but people will still be creative and want to learn to explore their creativity.

After DSLR’s started being able to capture good video, everyone thought that video was the next big thing – but it’s never really taken off the way everyone thought. What role do you see video playing?

The great thing about video is the depth of emotion you can convey – the story you can tell is so emotional. I’m an emotional guy, but there aren’t many photographs that move me to cry – but a YouTube video of a soldier coming home or something like that, gets me every time.

The speedbump to video is the editing wall. People take lots of video but it sits on their hard drive because editing is still such a chore.

If you could change one thing about the photography/video industry – what would it be?

I want to change the perception that photography is hard.

It’s not about menus…what do you need to drive a car? A steering wheel, brake and gas – aperture, shutter speed and ISO. Everything else is just options – the radio, heater, power windows – they’re nice but you don’t need that stuff.

The mystique (that photography is complicated) is used to separate people so it persists. Look at something like aperture – how overly complicated is that? Why do we still talk about aperture and f-stops – there could just be a dial – turn it one way – brighter…turn the other way – darker.

It’s what you’re standing in front of and how you aim your camera at it!

If it’s something different, unusual or something people don’t see every day – that’s it. 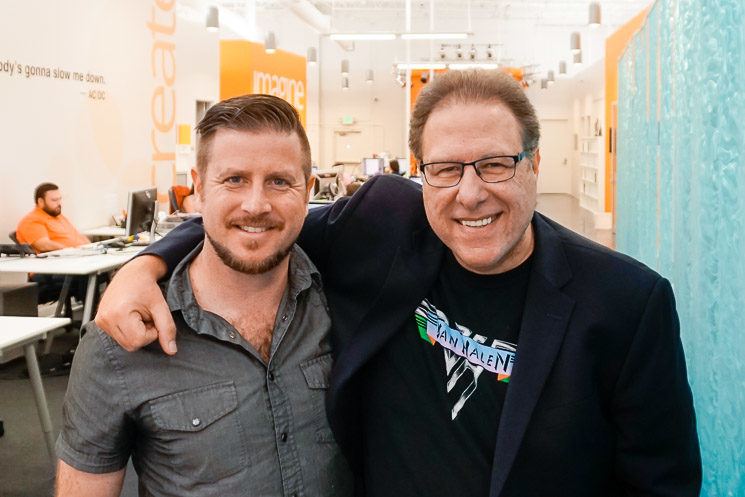 I want to thank Scott Kelby for taking the time out of his day to meet and talk about what he does at KelbyOne.

It’s kind of odd meeting someone who you have followed online for a long time – on a certain level you feel like you know them – or at least what they project themselves to be online.

Well I’m happy to report that Scott is exactly like you think he should be based on his online persona – right down to his rock-n-roll t-shirt and suit jacket – a genuine good guy.

Second, KelbyOne is very responsive to the needs of their members and is committed to their success. A lot of effort goes into offering members perks to add value to their subscriptions – there are member only forums, two digital magazines (Photoshop User and Lightroom User), interactive webcasts and discounts. There are a lot of businesses that could learn from this business model!

Finally, KelbyOne just feels like a genuine positive environment – from KelbyOne members to staff and instructors. With everything going on in our modern world Scott’s commitment to a positive creative space feels surprisingly refreshing.

Are you a member of KelbyOne? What was your experience?

Are YouTube tutorials good enough for you? What would prompt you to pay for online learning?

What would you have asked Scott?

Have anything to say about Scott’s answers?

Heart Shaped Bokeh Appears in Scott Pilgrim Vs The World

Timelapse Photographers Get Surprise Visit From An Affectionate Marmot