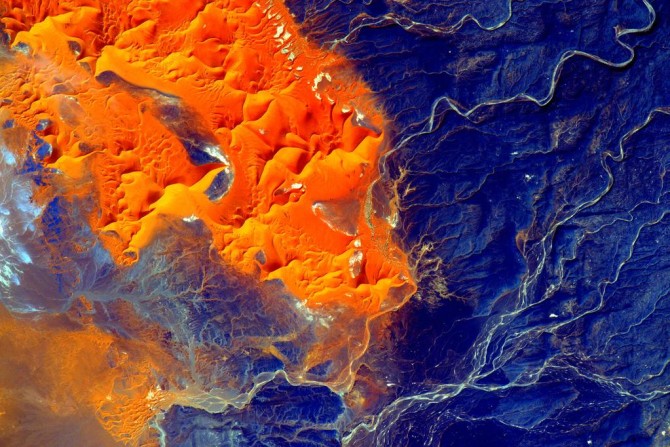 Have you ever seen the Sahara desert from space? Chances are you already have, but never as spectacular as in the amazing images Astronaut Scott Kelly has been posting to his Instagram and Twitter feeds directly from the International Space Station.

Last Friday, October 16, 2015, Kelly broke the record for the longest cumulative time for an American Astronaut living in space – 383 days, and he’s sharing his incredible views with us. This photo of the Saharan desert, for example, is simply breathtaking:

You may be familiar with Kelly’s name: back in July, he shared his thoughts about the challenges involved in making the image coined as the new “Blue Marble”.

Having now spent over a year in the ISS, Kelly is presenting us with front row seats to the most amazing lighting shows in the planet – the Northern Lights:

And in another piece of what could almost be abstract art, here’s a snippet of the Australian Continent:

Another image showing Planet Earth as a collection of shapes and forms:

A fantastic display of colour and textures:

The astronauts’ vantage point from the ISS also allows us bird’s eye views over politically sensitive areas, such as the salt pans in Xinghai, in industrialized China:

Kelly is set to break another record on Oct. 29th, when he will complete his 216th consecutive day in space, surpassing the previous 215 day record for an American Astronaut in space, currently held by Michael Lopez-Alegria.

Kelly is scheduled to return to Earth on March 3, 2016, by which time he will have compiled 522 total days living in space during four missions. – NASA

Godspeed, Sir, and thank you for sharing your amazing ride with us.

[Scott Kelly Becomes U.S. Astronaut to Spend the Most Time Living in Space via NASA]

Astronaut Chris Hadfield shares his motivation behind his 45,000 photos of the Earth
« The Next Version Of Photoshop Will Let You Customize The Toolbars
Affordable HyperCam reveals What’s Under Your Skin »