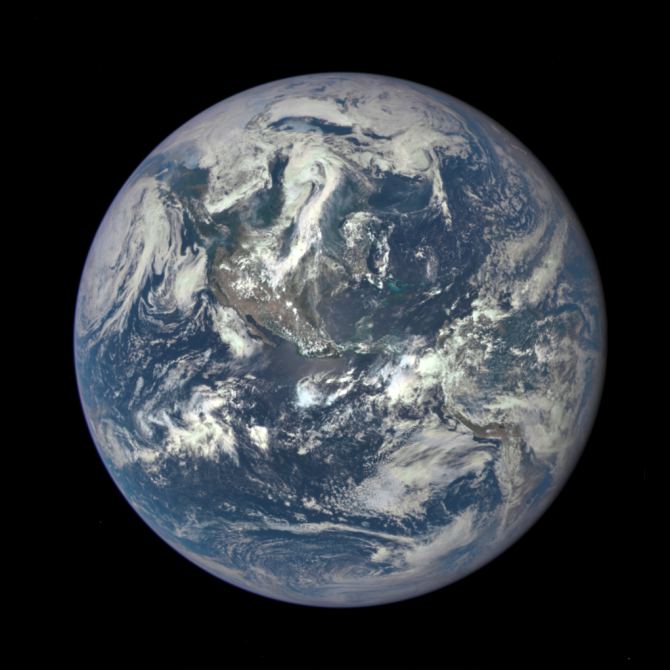 43 years ago NASA released a spectacular image of Earth taken from on board the Apollo 17. It is the one of the most widely distributed images in human history. Today, NASA released a new photo which could probably be crowned as the new Blue Marble.

And trust me, it is not an easy photo to produce. Scott Kelly, a NASA astronaut, shared the challenges involved:

The first challenge is that our planet is big. The only way to view all of it at once is to get much farther away from the Earth than we do for many of our activities in outer space. The International Space Station, for instance, orbits at a height of just 400 kilometers, or about 249 miles away from Earth.

The second problem is a familiar one that plagues many photographers who are Earthbound: lighting. In order to view the Earth as a fully illuminated globe, a person (or camera) must be situated in front of it, with the sun directly at his or her back. Not surprisingly, it can be difficult to arrange this specific lighting scheme for a camera-set up that’s orbiting in space at speeds approaching thousands of miles per hour

It is hard to believe but this photo was taken on a 4 megapixels CCD. That sensor belong to EPIC (Earth Polychromatic Imaging Camera) which is stationed on board NASA’s DSCOVR satellite. A weather monitoring satellite made by NASA, NOAA, and U.S. Air Force that was launched on February this year. EPIC takes 10 photos per exposure and this Blue Marble is a combination of the red, green and blue photos out of the ten.

It was also taken from an approximate height of million miles away from Earth.

This Blue Marble is the first fully illuminated snapshot of the Earth captured by the DSCOVR satellite, a joint NASA, NOAA, and U.S. Air Force mission. After launching in February 2015, DSCOVR spent months rocketing away from Earth before reaching its final orbit position in June 2015 at Lagrange point 1 (L1), about one million miles away from Earth. (A Lagrange point, in case you were wondering, is “a position where the gravitational pull of two large masses precisely equals the centripetal force required for a small object to move with them.” For our purposes, that means that a Lagrange point is a spot at which a satellite can maintain a fixed position relative to the Earth.) #

Here is the insta that NASA released, it gained over 160K likes in a matter of a few hours.

Here is another Blue Marble which was released on 2012, made by compositing a series of photos to eliminate clouds: 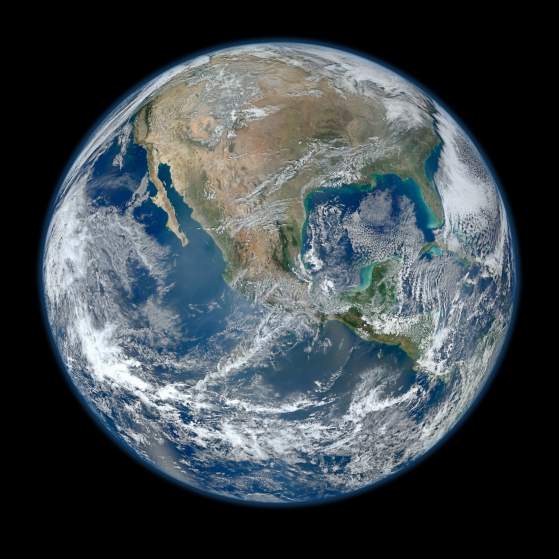 Description
English: A view of most of North America taken from a low orbit of about 826 km altitude. The whole hemisphere is not visible owing to the low orbit, and the horizon is at a distance of about 3,300 km, while the radius of the planet is 6,371 km. The diameter seen from this height is about 125 degrees. An image of the Earth taken from the VIIRS instrument aboard NASA’s Earth-observing research satellite, Suomi NPP. This composite image uses a number of swaths of the Earth’s surface taken on 4 January 2012. The NPP satellite was renamed ‘Suomi NPP’ on 24 January 2012 to honour the late Verner E. Suomi of the University of Wisconsin. Suomi NPP carries five instruments on board. The biggest and most important instrument is The Visible/Infrared Imager Radiometer Suite or VIIRS.
Source http://www.nasa.gov/multimedia/imagegallery/image_feature_2159.html

Lastly, here is the original Blue Marble of 1973 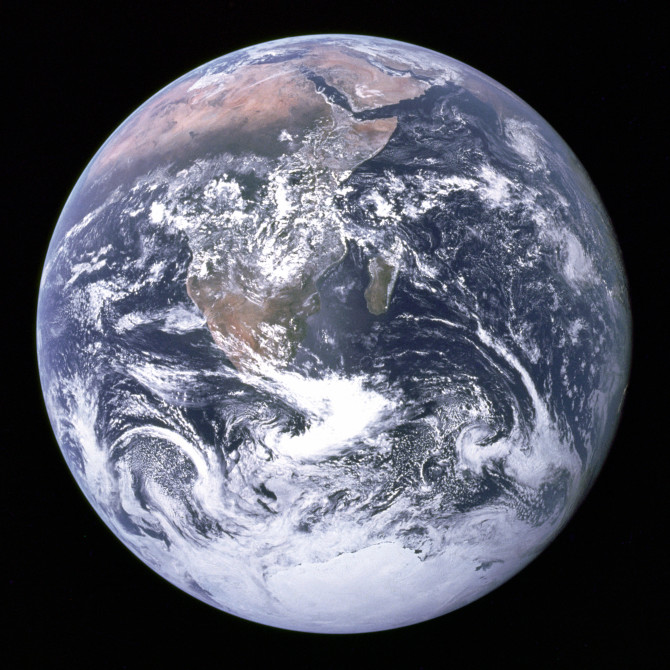