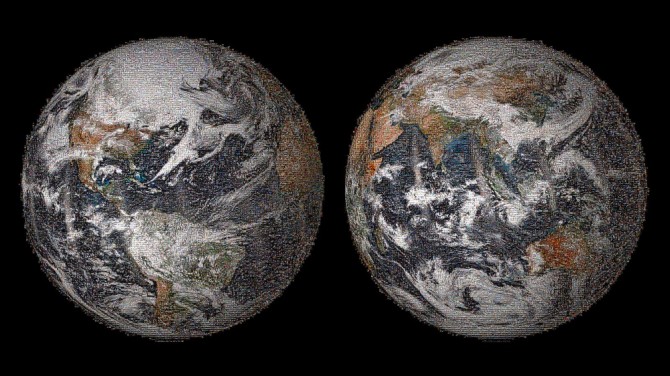 Last month on the 22nd – NASA marked Earth Day by asking readers around the world to submit a selfie, answering where exactly they were at that moment. While reading that out loud can slightly come off as an Illuminati theorist’s heart attack, the aeronautics administration had completely different plans. Today, they released what they accomplished with that request: a gigantic 3.2-gigabyte mosaic of the earth, composed of the pictures that everyone sent.

From countries like Germany, Peru, and Yemen to Pakistan, Russia, and the Maldives, the entire earth was represented through everyone that ended up participating; even Antarctica was prevalent in the massive photo.

What resulted was a picture that represented exactly what we are today: billions of people on one planet. While NASA has been responsible for feats such as discovering thousands of planets within the past decade, landing robots on the planets that neighbor us, and historically landing the first man ever on the moon that orbits us, no other planet is more dear to us than our home.

With the catastrophes we see on television, with the wars we learn of that humanity’s fought against each other, and with how divided we may all seem today, we are Earth. With how globalized nations and identities have become within the past 100 years alone, with how much we’ve begun to see the differences between us and our neighbors, and with how significantly our civilizations clash with each other in today’s time and age, we are still one Earth. This picture took a month to put together, and ended up becoming the largest selfie in the world; but through that, it sends a message. When you zoom into each country like you’re on Google Maps, you’ll start to see faces of people smiling – people going by in their lives, having fun, and acting just like you or I would.

To check out the entire picture itself, visit GigaPan to interact with it in full-scale. Download the JPG here.

« Linkin Park Reaches Out to Live Photographers, Launches Contest to Shoot for Their Tour
Godzilla: The Cinematography of Seamus McGarvey »