The ability to see under the human skin is something that we are more used to finding in superhero cartoons, sci-fi movies, or really expensive medical equipment. With the HyperCam, that might be about to change – and in a potentially affordable way.

Our eyes have always been able to operate much better than our consumer camera equipment, allowing us to see things our cameras can’t. But as technology progresses, it was only a matter of time until that changed. Jointly developed by members of the University of Washington and Microsoft Research, the HyperCam uses both visible and invisible near-infrared light to see under the surface and reveal unseen details.

It does its magic by illuminating a scene with 17 different wavelengths across the electromagnetic spectrum and taking a photo for each of them. In a second stage, the HyperCam’s software is then able to separate the images that are most likely to contain detail that can’t be seen with the naked eye, or through conventional photography. 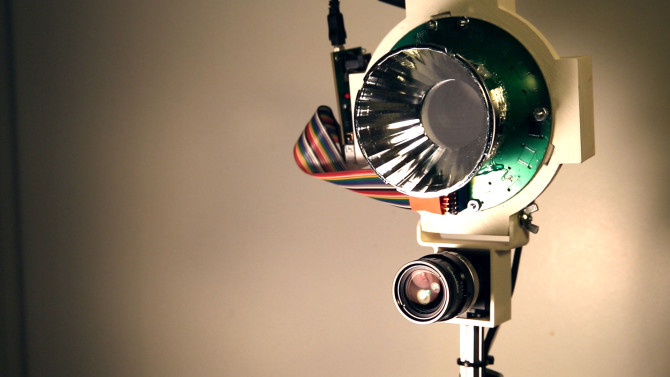 Using this camera, researchers have even been able to tell with a 94 percent success rate if fruit was ripe enough to eat. Can you imagine being able to shop in the supermarket and know you are getting the most delicious avocado on the shelf?

The applications for such a camera are very diverse, from being able to determine if crops are healthy and ready to be harvested, to the obvious medical use of being able to see under the surface of your own skin:

Biometric security is also another area of interest – as this technology gets cheaper, smaller, and more ubiquitous, fingerprints could easily be a thing of the past, as the HyperCam is able to reveal detailed vein and skin texture patterns that are unique to that individual.

And keeping with the sci-fi theme, hyperspectral imaging also gives us the ability of looking into the past and uncover secrets in old documents:

More than a hundred years ago, in the ancient Egyptian City of Oxyrhynchus, archeologists found piles of illegible papyrus. Recently, University of Oxford researchers found that they contained fragments of a lost tragedy by the ancient author Sophocles, of whose plays only seven were known to have survived.

Hyperspectral imaging is already in use today, but with cameras costing thousands of dollars or more, its usage has so far been limited to industrial or commercial purposes, for instance in satellite imaging and environmental monitoring.

The research team that designed the HyperCam is aiming to make the camera small enough to be incorporated into mobile phones. An hyperspectral camera smartphone accessory is estimated by its engineers to only cost around $50 when it hits the market. Until then, the researchers are continuing to work on some of the limitations of this technology, for example, to be able to work better in bright light.
[Affordable camera reveals hidden details invisible to the naked eye, via Engadget]