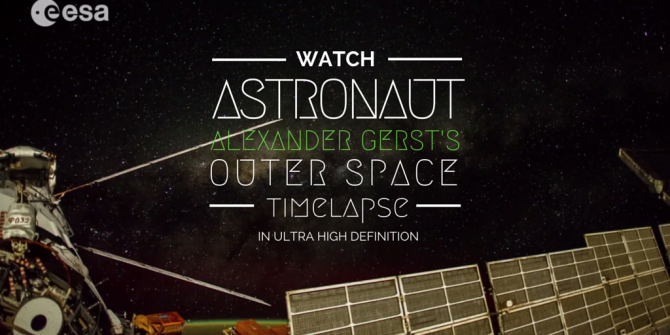 During a 6-month long Blue Dot Mission aboard the International Space Station, European Space Agency (ESA) astronaut Alexander Gerst took tens of thousands of photos. 12,500 of which were used to create this astonishing timelapse of earth from above. Periodically, Gerst would use an intervalometer to snap photos for him while he worked on other important tasks. Now, a little over a month since he returned to earth, the ESA has released the results of those sessions in the form of an ultra high definition timelapse video.

Viewers are treated to glimpses of earth and space taken from the rare perspective of space. Among some of the beautiful sights in the clip, there will be “auroras, sunrises, clouds, stars, oceans, the Milky Way, the International Space Station, lightning, cities at night, spacecraft and the thin band of atmosphere that protects us from space.”

Be sure to switch the Youtube settings to 4k playback for the ultimate space experience! You can watch Alexander Gerst’s Earth timelapses, here:

« Goldstein Turns Down “Enormous Amount Of Money” For 17,500 Vivian Maier Negatives; Sells To Toronto Gallery Instead
Go Underground With Ben Von Wong On A Photography Roadtrip To Germany »