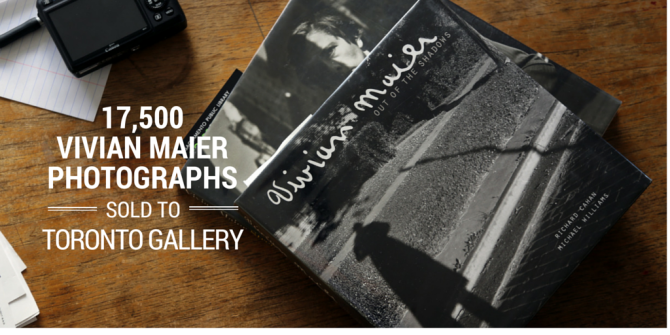 Following the controversy that surfaced over the summer, one of the major Vivian Maier collectors has sold his entire inventory of Vivian Maier negatives to the Stephen Bulger Gallery, in Toronto. During a recent interview, Goldstein told Hyperallergic that he spoke with an Asian buyer who was interested in purchasing his collection of Maeir negatives “for an enormous amount” of money, but Goldstein turned the buyers away, opting instead to complete a transaction with the gallery. While the amount of money paid by the gallery for the negatives remains undisclosed, Goldstein called the gallery “it’s perfect home” in part because Goldstein had collaborated with them in the past for a show of Maier’s photographs.

As you may remember, we reported complications had surfaced regarding the showing and sales of Maiers work after a letter was issued by the state public administrator’s office in Chicago, Illinois. The letter was issued to all those in possession of Maier’s works after a lawyer, David Deal, took special interest in the case, taking it upon himself to search for any relatives Maier may have left behind to assume the role as legal owner of her photographs. His search led him to a man by the name, Francis Baille, whom Deal believed to be Maier’s first cousin once removed. Upon discovering Baille, Deal filed a petition with the Cook County PA office stating he had found Maier’s closest living relative.

Several months have passed since the letter was issued by the state public administrator and they have since ruled that Maier’s closest relative is her brother, Charles Maier. The problem is, Charles’ last known whereabouts date back to 1955. A genealogist hired by Deal, however, says Charles is believed to be deceased and “the affiant has no knowledge as to whether [he] ever married, had or adopted children.”

This discovery has put the entire collective works of Vivian Maier in limbo, as the public administrator’s office (and the rest of the world) must now wait seven years to wait for Charles Maier (who may or may not be alive) to surface and claim what is legally his. It was this ruling that led Goldstein to sell his collection, minus about  2,000 prints and approximately “500 pieces of “color material” — including prints, negatives, slides, and transparencies.”

Goldstein calls his decision to transfer the images to the Stephen Bulger “what was best for the collection in light of all that’s taken place.”

[ via Hyperallergic | Photo by Robert Couse-Baker ]