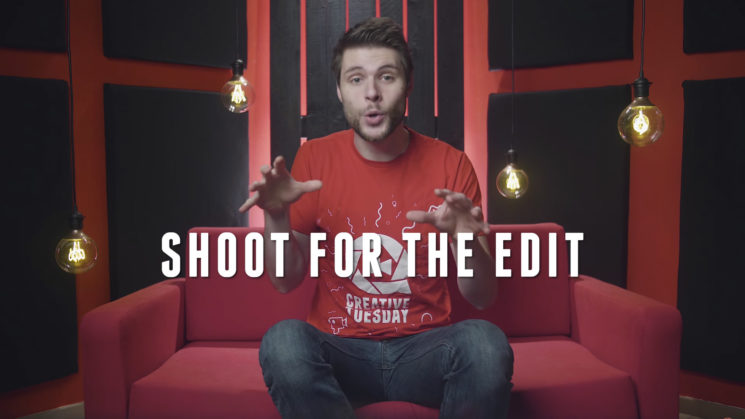 If you’ve been making films or videos for any length of time, you quickly figure out how important it is to plan in advance. But for things like run & gun style documentary shooting or vlogs, that can be difficult. Even if you have a rough idea of what the day may entail, you never really know for sure until it happens. You’re often just shooting what you see, then trying to figure out how to tell the story in the edit.

But it’s still possible to think on your feet and come up with a story while you’re shooting. As Jordy Vandeput explains in this video, the trick is to figure out what’s going on, and how you want edit it to before you even hit record. Then let this edit in your head guide your shooting.

All stories have a structure. There’s a beginning, which introduces the viewer to the premise of our story. This is followed by the middle, where our story plays out. Finally, the end, where our story concludes. While what goes into each of these things will vary from genre to genre, that structure is in all of them. Look at any TV show, Hollywood big budget movie, or even somebody’s vlog.

In the case of a vlog, though, even if you have a rough plan for the day’s activities, the story can change. It’s evolving constantly as new things happen. The story you end up shooting and telling may not be the one you initially set out to create.

So, Jordy has some tips.

This needs to be exciting or enticing. It sets the tone for the video and informs the viewer what the rest of the video is going to be about. But keep it brief. It’s just supposed to whet their appetite for the rest of the story. And as the story changes throughout the day, you might find yourself shooting a whole bunch of new intros. Don’t just get locked into one and stick with it if something more interesting happens.

This is the core essence of the video. It’s one big story, which contains lots of little sub-stories. Jordy gives the example of a woman walking towards a bar and ordering a drink.

Normally, one might just follow along, and then just see what footage they end up with in the edit. If they have enough and can cut something together that makes sense and looks good, then awesome. Often, though, such elements end up getting dropped because there aren’t enough shots to give the flow and pace that you want.

To get around this, Jordy thinks about how the edit should play out in his head. And he does this just before he knows it’s going to happen. This lets him know how to film the shot. The techniques to use, the angles to cover. Then when he gets to editing, he knows he’s already got everything he needs to make it work.

The sequence is only four shots. A wide, a medium, a close up and a final wide. But it tells the short story of ordering a drink much better than simply following along with a single camera that doesn’t change throughout the journey. You can still shoot it in one long take, though. Just remember to change your composition and possibly focal length as you go.

Transitions are another thing to think about in your shots. Darious Britt showed us some great in-camera transitions recently, which you can easily implement into your videos. But, again, you need to plan for them in advance. Jordy has some more of them, too, which you can see here. Some transitions you can do it post without fancy camera tricky. But, you do still want to figure out those transitions in advance so you can film it in a way that is appropriate for that transition.

The above transition basically involves filming the same shot twice. In this example, first with the room empty, before people arrive, and then again once it’s populated. A simply glitch effect allows you to easily go from one shot to the next, showing the passing of time. A very effective transition, but impossible to do in post if you don’t think about it while shooting.

This just needs to wrap up the video. It can be something abstract or relevant to the main point of the video. Whatever it is, use an image that’s going to stick in your viewer’s mind and make them remember the video.

I’ll often shoot something very specific for the end of my own videos. YouTube’s end cards stay up for 20 seconds, and you can’t move them. So, throughout the day, I’ll shoot a bunch of clips between 30-60 seconds that I can potentially use for the ending as the story evolves. Often, the first long take I make of the day ends up being the shot that I use, because it’s what initially caught my eye that day. But it can easily be something else entirely if something else changes my mind during the course of the day.

It’s still a good idea to try to plan out your whole video in advance wherever possible. But learning to edit in your head and think on-the-fly will let you easily adapt to evolving situations.

If you want to check out more of Jordy’s videos, head on over to his YouTube channel. He regularly posts out great tips and content for filmmakers and YouTubers.