Although Laowa does make a cinema mod version of their crazy 24mm f/14 Probe lens, they’re not really known for their cinema lenses. Because they haven’t really made any, until now. At NAB 2019, we saw a couple of pretty cool new lenses on the Laowa stand. 12mm T2.9 prime and a 25-100mm T2.9 zoom cinema lenses. So, we stopped to have a chat with them.

The Laowa 12mm T2.9 Zero-D Cinema lens is essentially the same internals as the Laowa 12mm f/2.8 but in a cinema shell. So it features the same 16 elements in 10 groups, offering the same field of view. It still has a minimum focus distance of 18cm and, naturally, it is also a manual focus lens.

But it has a much longer focus throw of 270-degrees, for use with gimbals and follow focus units, as well as a stepless aperture ring. It’s available in Canon EF and PL mount with a 100mm front filter adapter with a step up ring to the standard 114mm for use with matte boxes.

It’s not available to pre-order just yet, but Laowa estimates the price to be just over $1,000. It’s expected to start shipping in a couple of months. 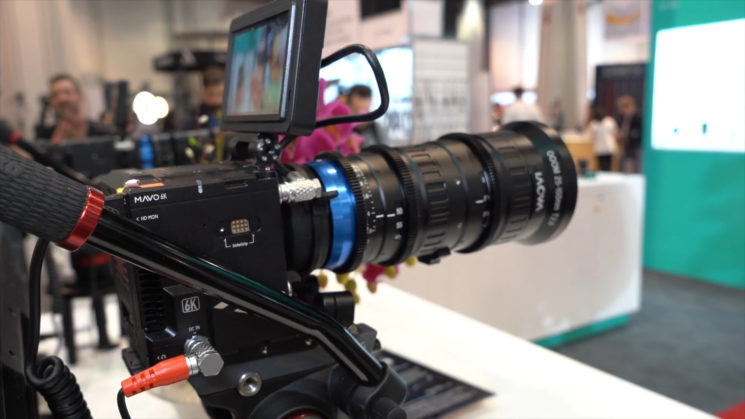 The Laowa OOOM 25-100mm T2.9 lens, on the other hand, is not a rehousing of an existing lens. It’s all new, offering a very varied range of zoom. Like the 12mm T2.9, it will become available in Canon EF and PL mount flavours. Designed from the ground up, it’s a parfocal lens. This means that once you’ve locked your focus on a subject, as long as they and the camera don’t move, you can zoom in and out without the focus shifting. Laowa says that there’s also very little focus breathing throughout the focus range.

The constant T2.9 aperture also means that your aperture isn’t going to adjust itself as you change focal length, as it does with variable aperture zooms when used wide open. It has a native 114mm front diameter for use with matte boxes without adapters or step up rings.

The Laowa OOOM 25-100mm T2.8 lens is expected to be available sometime between October and December 2019, with an estimated price of around $6,500.