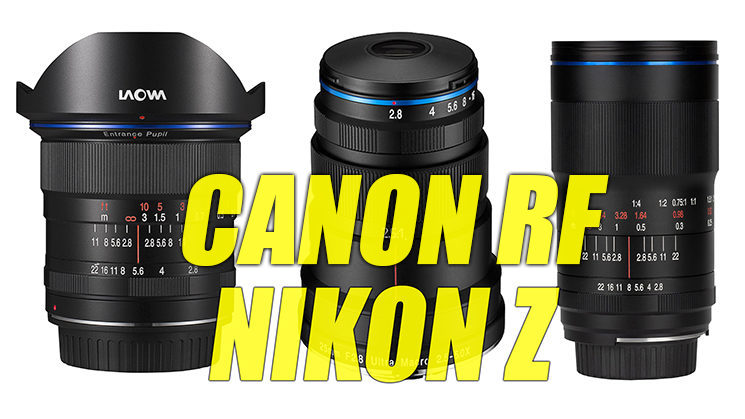 Earlier this year, Venus Optics launched two wide-angle lenses for Nikon Z. The company is now expanding its Z-mount line, along with the Canon RF mount line. Three of Venus Optics’ most popular lenses are now available for Nikon’s and Canon’s full-frame mirrorless cameras. The 12mm f/2.8, 25mm f/2.8, and 100mm f/2.8 already exist in a few other mounts, but they are now available to Nikon Z and Canon RF users as well.

The Laowa 12mm f/2.8 is designed for full-frame cameras and it’s almost distortion-free. It was launched way back in 2016 in other mounts, but now it’s available for Nikon Z and Canon RF as well. Here are the specs:

The Laowa 25mm f/2.8 Ultra Macro was first introduced in February last year. It was originally available for Nikon F, Canon EF, Pentax K, and Sony E, but now you can preorder the Nikon Z or the Canon RF version, too. Let’s check out the main specs:

Lastly, the Laowa 100mm f/2.8 2:1 Super Macro is the most recent one from the batch. It was announced in May this year, available for Canon EF, Nikon F and Sony FE. Now there are also the Nikon Z and the Canon RF models available for preorders, and these are the specs:

These three lenses have been available for a while in other mounts. If you order them now, you can expect them in mid or late December. But the Canon RF and Nikon Z versions are only available for preorders, and they will start shipping in March 2020.

« Use this browser extension to regain view of Instagram like counts
Update: ProGrade did not accidentally leak an unannounced Fuji camera, they say it was just a typo »