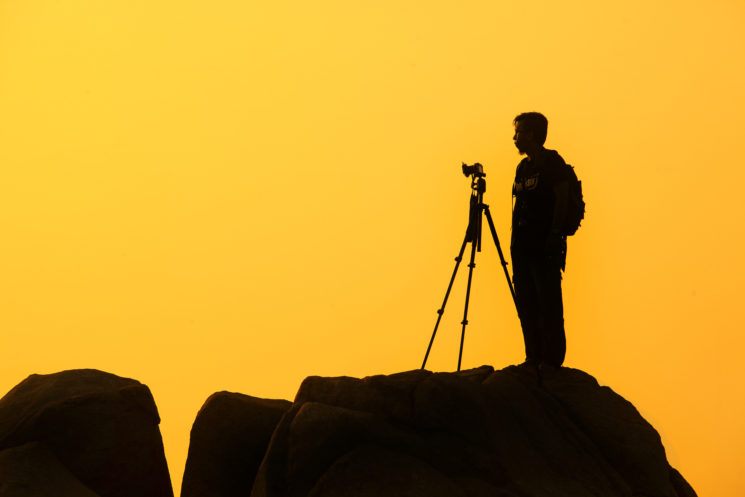 Has it happened to you that you come to a beautiful location just to see there are plenty of tourists/other photographers blocking your view? I’m sure it has. Travel photographer Brendan van Son faced this problem at Moraine Lake, and it left him with a question: “Are photographers ruining photography for photographers?”

As Brendan points out, landscape photography at sunrise is his “happy place.” At this time, there are usually not too many people awake, not to mention that very few of them would climb a mountain or hike for miles just to take photos. However, he woke up to see this wasn’t the case at Moraine Lake. During the sunrise, he didn’t have the place for himself, but there were 15-20 other photographers climbing the rock pile. He was annoyed not just because they were in his shot, but also because they used a pile of logs to walk around, even though there was a trail. And also, he felt like his “happy place” was taken away from him.

If we leave out casual tourists that will certainly get into your shots plenty of times, in this case, Brendan is focused on photographers. He believes that it’s especially YouTube photographers who are “ruining photography for pros”. I’d add Instagram photographers as well, and generally speaking, everyone whose work is mainly focused on the presentation on social media.

Now, while I do get annoyed by other people ruining my shots, I can’t completely agree with Brendan. First of all, everyone has the same right to be there, no matter the reason. Whether they take a fine art landscape photo, a material for the vlog, photos for social media or holiday snapshots – there’s no raking who “deserves” to be there more. Secondly, now that photography is more available than ever before, there are more and more people getting interested in it. People get passionate about it and want to take their best shot, no matter if they are “pros” or not. Sure, an annoying teenager taking a selfie while I’m trying to get the shot is annoying, but she has the right to be there just as much as I do. After all, most of the times when you kindly ask people to move – they will.

Of course, there’s another side of this, too. If people are breaking the rules or risking lives to take photos, it’s normal to be annoyed. What’s more, you should feel free to tell them to move and stop doing what they’re doing. Not just so you can take your shots, but because of general safety or saving the environment.

Personally, I’m learning to accept the fact that, at certain places, there will always be someone in my shot. If they’re enjoying themselves and not risking their safety, I even love to see them having a good time. I will either incorporate them in my shots or find a way to take photos so I can avoid them. Either way, I believe they have the same right as I do to be there, no matter their photographic skills or purpose of their work. And how do you deal with other photographers getting into your shots? Do you include them in the shots, tell them to move, or something else?

Geotagging your landscape photos is ruining the world around us. Stop it