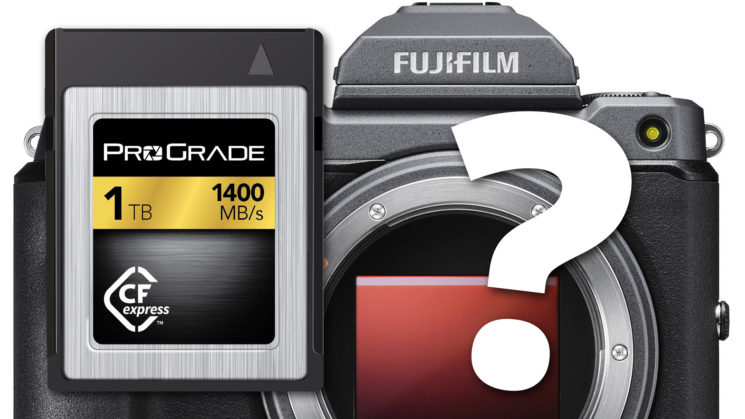 CFexpress is coming. Of that, there is no doubt. It’s the drop-in replacement for XQD and will also replace many of the CFast 2.0 slots on the next generation of cameras. ProGrade Digital was the first to announce support for the new format, back in April last year, but they’ve been holding off on releasing it until hardware comes out that actually supports it.

See the update at the bottom of this article containing a response from ProGrade Digital.

Nikon has been promising support for almost a year, and Panasonic released their firmware updates a couple of weeks ago, too. But in an email to those who have pre-ordered their CFexpress cards, ProGrade states that they’re waiting on device manufacturers to release them, including Nikon, Canon and Fujifilm. Canon is expected to support CFexpress in the upcoming 1DX Mark III, but Fujifilm doesn’t make any XQD/CFexpress cameras. Yet?

Interestingly, there’s no mention of Panasonic there, despite them having recently released firmware updates for the S1 and S1R to provide CFexpress support. And given that those devices now already support the new standard, why wait for the other camera companies to catch up? Why not launch now and beat the competition to those early CFexpress sales?

Anyway, more interesting than that is the fact that they mention they’re waiting on Fujifilm. Even Fuji’s latest GFX100 medium format doesn’t use XQD cards, choosing instead to go with a pair of SD card slots. And there haven’t been any rumours of a new high-end Fuji camera that would demand CFexpress kinds of speeds.

So, does Fuji’s inclusion in ProGrade’s email suggest that they know something the rest of us don’t? Is Fuji planning to announce a new camera at some point this month that includes an XQD/CFexpress card slot? Or could it just be a typo? The Fuji camp has remained pretty quiet on any big new camera releases, but it’s possible they might announce something.

Maybe we’ll see another new medium format camera that’s out of the budget of most photographers. Or, perhaps, just maybe, if they are to announce anything, the more likely candidate might be a video-focused Fujifilm X-H2. The X-H1 has proven to be extremely popular. It’ll be 2 years old in March, and there were only 2 years between the release of the X-T2 and the X-T3 cameras.

There’s another company out there with cameras containing XQD card slots who has remained silent on the whole CFexpress issue so far, and that’s Phase One. The Phase One IQ4 150MP contains both XQD and SD card slots, but there hasn’t been a peep out of them when it comes to a firmware update to add CFexpress compatibility. This is surprising to me, as the kinds of people who can justify spending that much money on a camera are also the same kinds of people most likely to fork out for the newer, faster, and probably very expensive card format as soon as they’re released, too.

We’ve reached out to ProGrade Digital and will let you know when we hear back.

Update: We have received a response from ProGrade Digital. It turns out that it was indeed just a typo. They say that Fujifilm’s name was listed by accident and it should indeed have been Panasonic that was there instead.

This was an error in an email that went out to customers as an auto-confirmation of their order; FujiFilm was listed instead of Panasonic. ProGrade Digital would never “pre-announce” another company’s product. This order confirmation email simply referenced public information about previously announced cameras from device manufacturers so that customers are aware that the cards will ship when cameras are in the market that can accept the CFexpress cards. Again, FujiFilm was listed in error and we regret any confusion that this caused.

The original title of this article was “It looks like ProGrade just accidentally leaked an upcoming Fuji camera with CFexpress support”. It has been updated to reflect ProGrade Digital’s response.

« Venus Optics expands their Z-Mount and RF-mount range with 12mm f/2.8, 25mm f/2.8 and 100mm f/2.8 lenses
How to create separation between model and background in Photoshop »