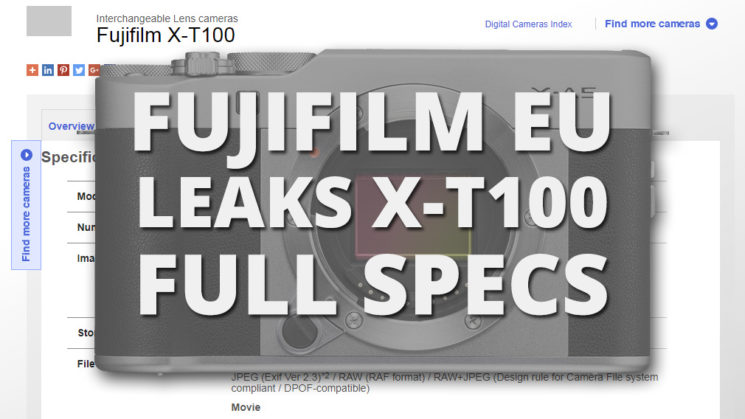 Leaks happen all the time. Often they’re through anonymous sources, and occasionally a distributor lets something slip. But it’s rarely by the manufacturer themselves. This time, though, it seems that Fujifilm EU has accidentally leaked the complete specs for its upcoming X-T100 camera. The page was quickly taken down, but not before Google managed to snag a copy in its cache.

The leak was spotted by serial leakers Nokishita. They posted a copy of the basic specs, along with a links to cached content. For all intents and purposes, the X-T100 seems to basically be a Fuji X-A5, but with an EVF, 3-way tilting touchscreen and a bigger buffer.

You can see from the cached copy posted to the Fuji EU website, that the specs between the X-T100 and X-A5 are largely identical. It has the same resolution sensor, same stills and video capabilities (including 4K “video” that isn’t really worth including at only 15fps), autofocus system, flash capabilities, shooting speed, bracketing, the works.

But let’s take a look at the differences, starting with the big one. The most noticeable difference between the two, obviously is that the X-T100 will come with an electronic viewfinder. Something that the X-A5 does not possess.

The X-T100 also sees an increased continuous shooting buffer. This is down to “newly equipped powerful memory“, says Fuji.

Although the continuous shooting speed of the X-T100 hasn’t increased over the X-A5, the buffer limit has. 10 shots at 6fps has received quite a nice bump to 26 frames. So, if you’re shooting longer fast sequences you can keep going for a good 4 and a bit seconds. For 3 fps shooting, you can keep going until your card’s full.

The other outward difference is the LCD. While it’s still the same size, aspect ratio, and resolution touchscreen, it’s now a 3-way tilt instead of the standard flip-up of the X-A5.

To account for the extra mechanics in the LCD, as well as the EVF, the X-T100 is naturally a little larger and heavier than the X-A5.

Obviously, there’s no word on price yet.