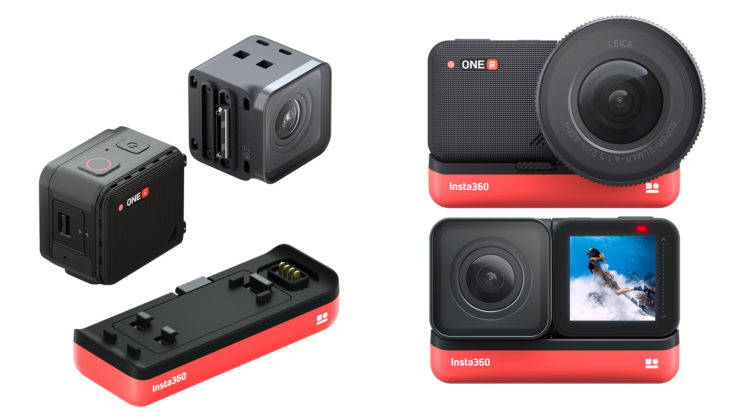 Action cameras seem to come out with alarming regularity, and more players are jumping into the field every year. But there’s been very little real innovation in action cameras beyond improving on what already exists. Insta360, though has taken a very different approach with their entry into the world of action cameras.

Announced today, the Insta360 ONE R sees Insta360 team up with Leica to develop a modular action camera that offers three different ways to shoot. A dual-lens “Super 5.7K” 360° module, a 4K wide-angle module, and a 1″ 5.3K wide-angle module developed in partnership with Leica. And there’s even an Aerial Edition which lets you mount it to a drone.

The Insta360 ONE R is designed to adapt to as many different shooting needs as possible. A bunch of different kits are available which incorporate one or more modules so that you only need to buy what you need, but you can always buy other modules separately if you want to add them in the future. The ONE R is launching with three modules.

The 360° kit also comes bundled with the regular 4K wide-angle action camera module, but you can also buy the 360° and 5.3K camera modules separately, too. Now, with a modular system like this, the biggest question is going to be “But is it waterproof?”. After all, it’s become a somewhat standard feature on action cameras these days, without requiring an external housing.

Well, it’s good news, it’s all waterproof to a distance of 5 metres (around 16 feet), which should be plenty for most uses. If it gets rained on, falls in a puddle, or even enters the swimming pool it should be just fine. And for deeper dives, there is a dedicated dive case for the 4K module that lets you go down as deep as 60 metres (197 feet).

The way it’s designed is pretty cool. The base onto which the whole thing sits is essentially the battery. And this can be swapped out for a double-size Boosted Battery Base if you need longer life. 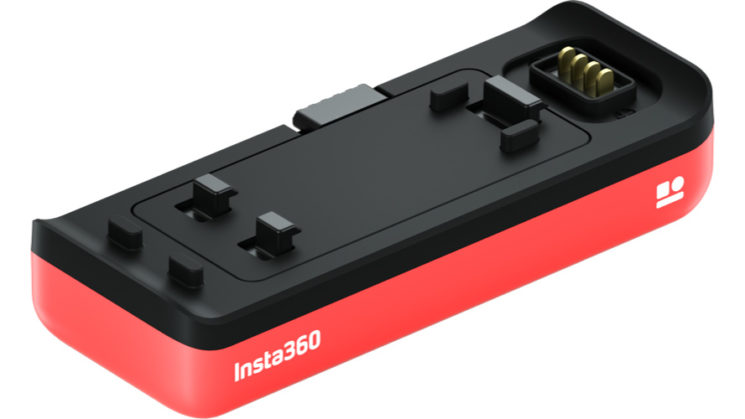 On top of this, you add one of the three camera modules to one side. And next to that you add your “Core module”, which contains the brains and an LCD screen.

With the dual-lens 360 module, you get “Super 5.7K” capture on two lenses that cover a full 360-degrees in horizontally and vertically. But where it shines over the Insta360 ONE X and Insta360 EVO cameras is that you get real-time 360-degree preview on the touchscreen LCD. They say it also offers the best colour accuracy and low light performance of any consumer 360° camera.

What’s so super about the 5.7K? Well, that’s the other advantage over the ONE X and EVO cameras. The ONE R offers h.265 encoding for 360° footage, meaning you can retain higher quality and detail at the same bitrates vs the h.264 of the other cameras. And, of course, you can bring the footage into the same Insta360 apps for smartphones and desktop that you’d use with a ONE X.

It looks like the 4K camera module can also be flipped to face forward or backwards depending on whether you want to film what’s in front of you or yourself, while still being able to see the LCD screen.

The 5.3K 1″ camera module provides 5312 x 2988 resolution at up to 30 frames per second or 3840 x 2160 at up to 60 frames per second. It’s a little slower than the 4K module when shooting 1080p, though, coming in at only 120fps. But you also get to edit your files in the apps, LOG video, and in-camera FlowState stabilisation. There’s no HDR like there is with the 4K module, but being a much larger sensor, it likely has a higher dynamic range than the sensor in the 4K module anyway.

As action cameras (or 360 cameras) go, it’s a very unique approach that I haven’t seen any of the other big names really attempt yet. GoPro has kind of given it a go with bolt-on extras with the Hero 8, but to make the camera itself a modular system? That’s very cool.

It also means that when new modules come out offering higher resolution, faster frame rates, or whatever more advanced tech, you probably won’t have to sell off your old one and buy a whole new camera, just upgrade that one module.

It certainly offers a lot of options and a rather nice upgrade path.

The Insta360 ONE R is available to pre-order now in several kits.

If you decide to kick off with the 4K edition, you can buy the other modules separately at a later time…

One other thing that’s been announced along with the ONE R is an Aerial Edition, although no price or pre-order link for this has become available yet. The Insta360 ONE R Aerial Edition essentially appears to be a frame which wraps around a Mavic Drone (exactly which model isn’t specified, although I’d suspect at least the Mavic 2 models) to which you can then attach the various ONE R modules for shooting with that 5.3K 1″ sensor or even shooting 360° footage from the air.

As mentioned, there’s no news on availability for this one yet, and information on it is a little scarce overall, but we’ll let you know when we hear more. For now, though, keep an eye on the Insta360 website.