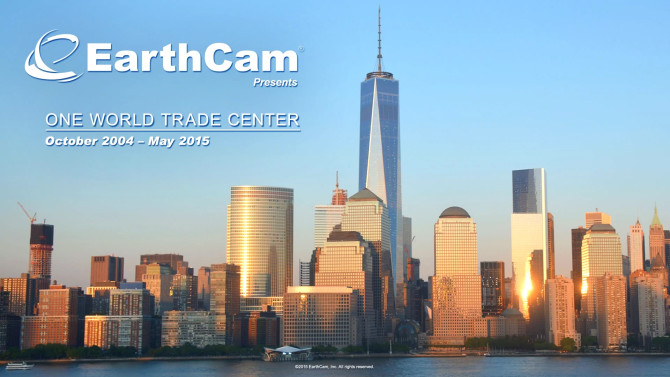 EarthCam started webcasting the activity at Ground Zero just days after the September 11 terrorist attacks, and has since been capturing high resolution images for this start-to-finish time lapse of One World Trade Center being built.

According to EarthCam “Hundreds of thousands of high definition images were captured over the past 11 years and hand-edited for this exclusive time-lapse movie”, and over one million photos in total have been taken between the company’s commemorative World Trade Center movies.

A dedicated team has been attending to the many cameras scattered in the area for 5000 days now and also created the 10-year time lapse video below of the Memorial Museum’s construction.

The new video, captured between October 2004 to Memorial Day 2015, was released a few days ago in recognition of the opening of the One World Observatory located 1,250 feet about street level.

The tower itself, also called the Freedom Tower, is the tallest skyscraper in the Western Hemisphere at 1,776 feet and has already become a favorite subject among photographers.

The first camera at Ground Zero, which was personally installed by EarthCam founder and CEO Brian Cury, as well as the construction images of the National September 11 Memorial Museum have since been donated to the museum.

“Dedicating the past 13 years to providing technology to create this time-lapse is our way of honoring the victims of 9/11,” Cury said last May when the Memorial Museum tribute video was released. “I hope it serves as a way to recognize that for the ten years of construction, there was constant progress made to rebuild these important 16 acres of America.”

« Let Enrique Iglesias Show You Why Grabbing A Drone Out Of Mid Air Is A Really Bad Idea
ARRI Alexa Goes Head To Head With BMPC. Winner Is Obvious, But There Is Still A Valuable Lesson »