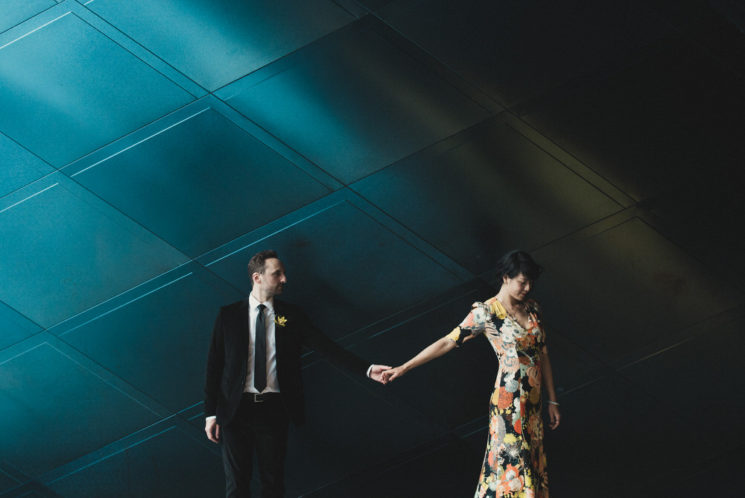 I recently shot a wedding with just one lens, a Rokinon 35mm t/1.5 on a Sony A7sII body. This was completely unplanned and wasn’t done to prove any point. I also carried multiple lenses and bodies in my bag that cover all the focal lengths I normally use: 24-70mm f/2.8, 55mm f/1.8, 85mm f/1.8, 70-200 f/2.8. Between these lenses, I’m covered for all the distances and lighting conditions I encounter while shooting weddings. I just didn’t have to use any of them on this occasion.

You can open the gallery of the wedding in a new window before continuing to see the results before we get into the details.

What Lenses Do I Normally Shoot With?

Over the past couple of weddings, I did notice that I mostly kept the 24-70mm on one body, and either the 55mm or the 35mm on the other. I hardly touched the 85mm and the 70-200mm save for times where I couldn’t get as close as I’d like during the ceremony or when I wanted to compress the backgrounds a bit more for portraits.

Like most weddings, I started with the 35mm during the “getting ready” part of the day because it’s a great walk-around prime lens that gives me beautiful bokeh. The minimum focusing distance is just 12” so I can get in close for tighter portraits and details shots and stepping back allows me to a wide enough angle to frame multiple people.

When I use this manual focus lens, I also find myself composing a little bit more deliberately like when I used to shoot on film years ago. It’s extremely satisfying, especially with the longer focus throw on this lens. Without the luxury of split-second autofocus or zoom, my eye is constantly on the scenes as they develop, forcing me (in a good way) to anticipate where the action will be so I can be in focus when it is time to press down on the shutter. 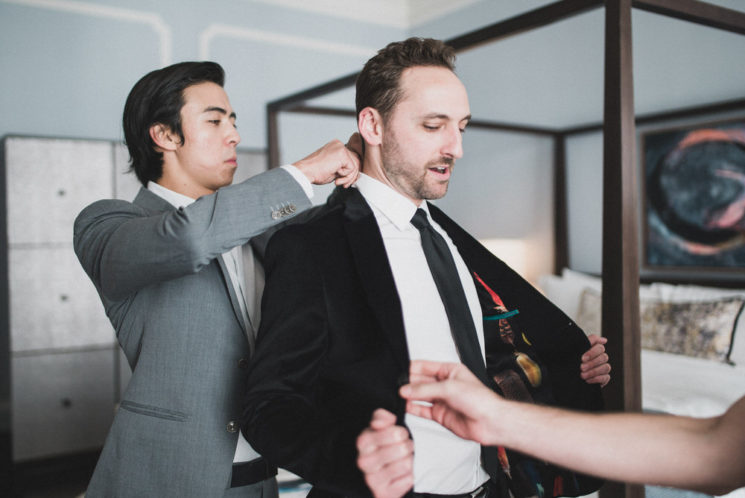 Zooming With My Legs

Shooting the groom getting ready, I moved in bit when I wanted to get a tighter frame like of one the groomsmen preparing his speech and then out a couple of feet to get a wide shot of the father of the groom playing on the floor with his grandson. 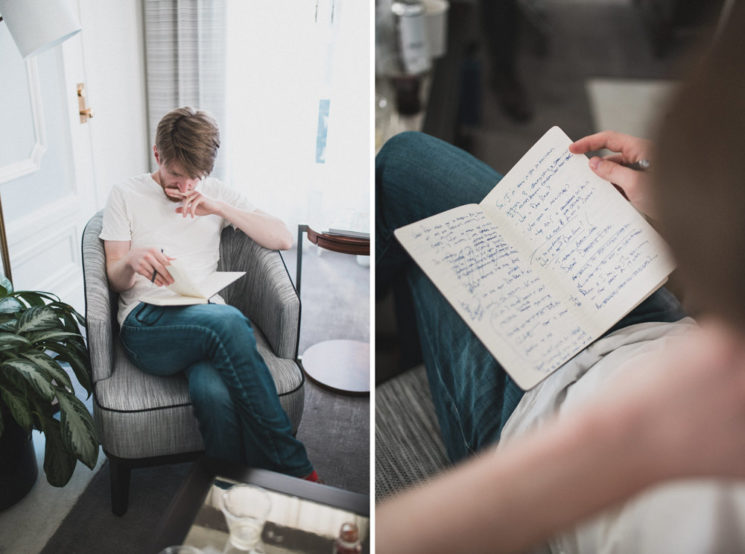 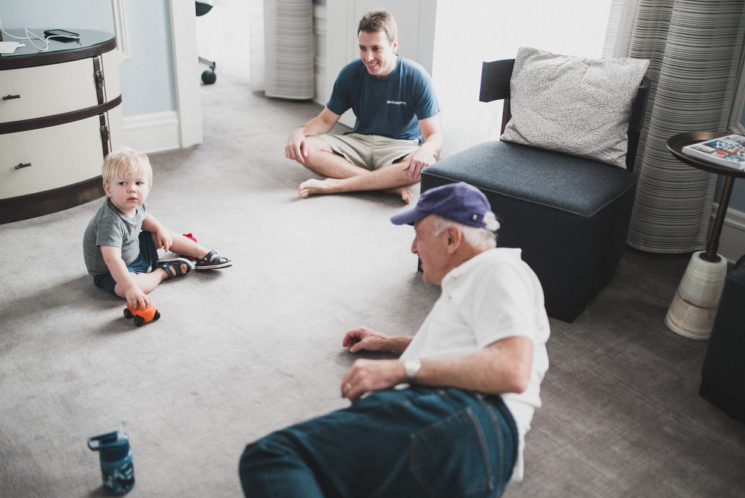 In a tighter space, I usually put down my second camera body, so I can move freely around without the extra weight. I didn’t have to touch it once because I was more than satisfied with the shots I was getting. The shallow depth of field allowed me to soften the background of the hotel room and focus more on my subject.

Moving over to the bride, I found no need to change the lens. I was once again shooting in a relatively small space and the lens was excellent and minimizing any light flares from shooting directly into the light coming from the windows. 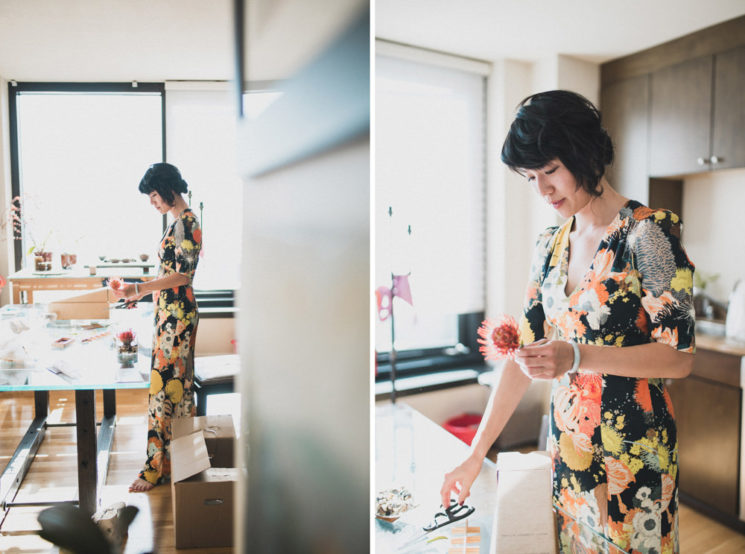 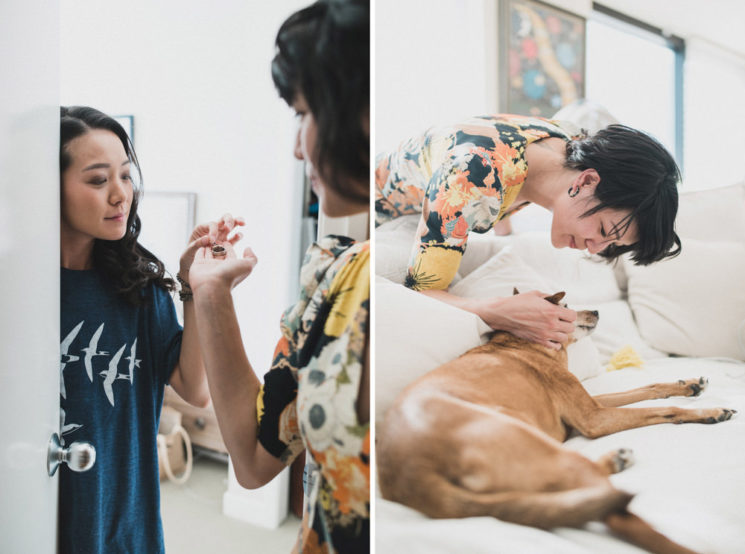 Between the silent shutter on the A7sII, the de-clicked aperture on the lens, and not using any motor movement for focusing, I was shooting virtually silent. The bride and her sister even pointed out that it was a little weird that they didn’t know when I was shooting, especially if I was “hiding” behind something to create a blur element in the foreground.

For the getting ready shot, I was nearly tempted to switch over to the 24-70mm so I had a bit more range and reach and the auto focus since the groom would be walking directly towards me on his way to the bride. But since I was feeling very confident with my ability to manual focus (about 95% of my shots’ focus was spot on up to this point), I decided to stick with the 35mm. 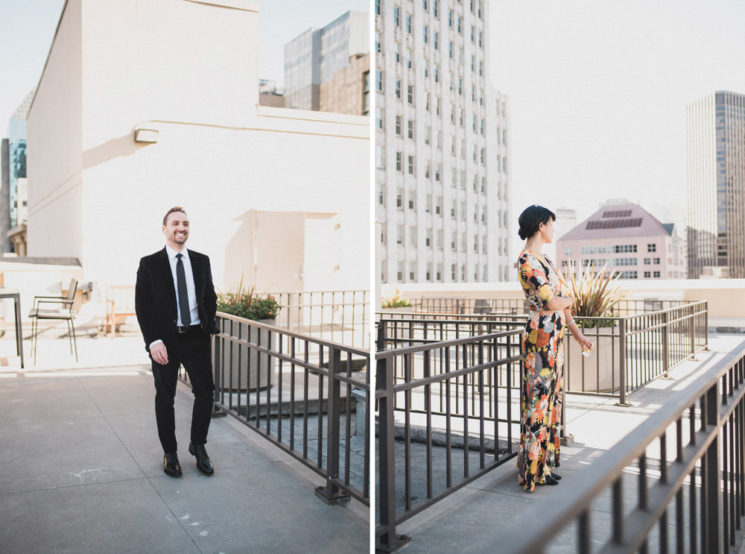 Shooting Portraits With The 35mm

Next up were portraits. If there was a time for this lens to shine, it was now. We had 15 minutes to shoot in the SF MOMA before it closed, so I had to move fast and shoot in not so ideal light. The extra two stops of light between this lens and the 24-70mm f/2.8 was very valuable. I also had a lot of room to maneuver around in the large chambers of the exhibition halls, so I didn’t really need to go as wide as 24mm. Meanwhile, I could continue to step in closer to get the tighter shots. 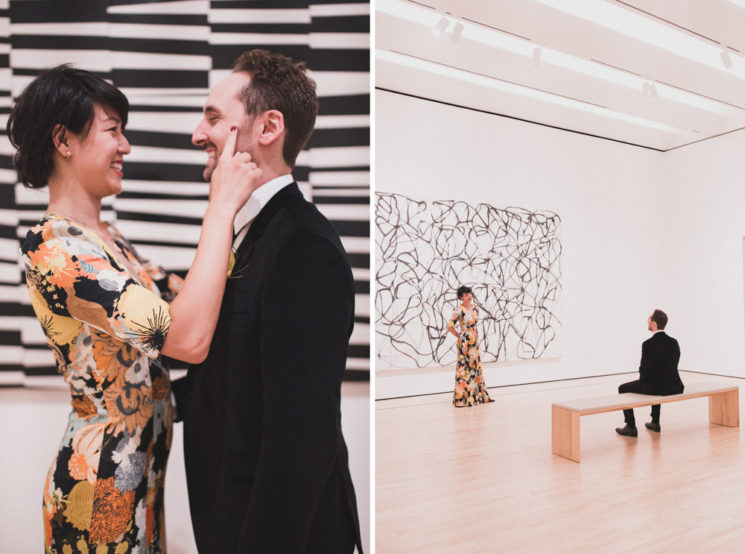 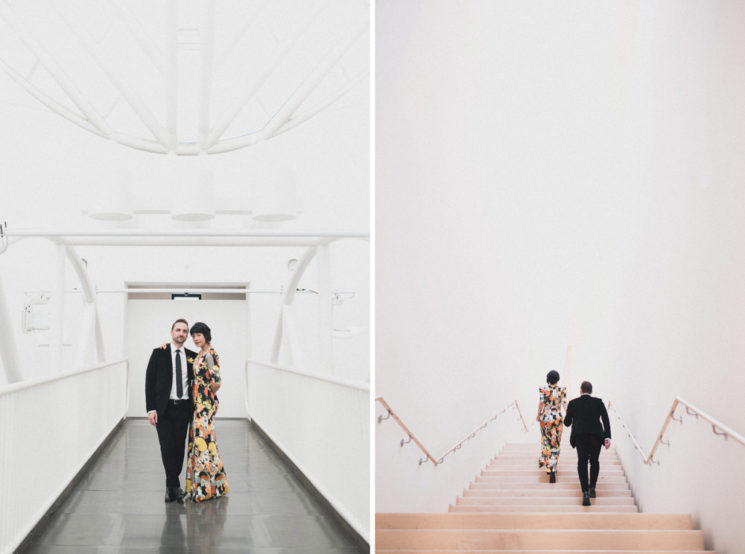 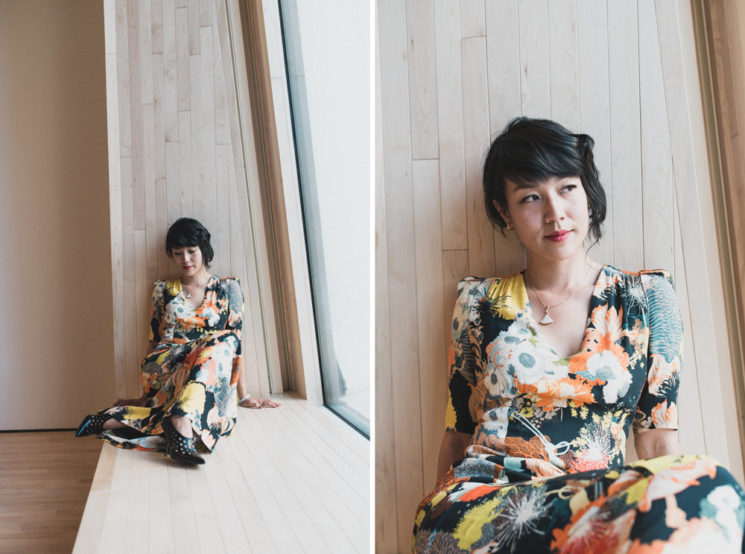 In the last shot, you can see a side by side of two shots I would normally get with a zoom lens. In this instance, I just had to step in a bit closer for the second shot. When I moved in, I simply turned the aperture ring a bit to get more of her dress in focus, and adjusted the shutter speed accordingly. The de-clicked aperture made doing this even faster normal.

We moved to the Yerba Buena Gardens to contrast the indoor shots with some outdoor “nature” shots. Since it was warm day afternoon on a Saturday, the place was packed. I wanted to get portraits without all the people and clutter in the background. To achieve this, I had to compose a very tight frame and get in close to the couple. The shallow minimum focusing distance proved to be very useful again, and I was able to focus on their details like their hands, eyes, and smile in each shot. 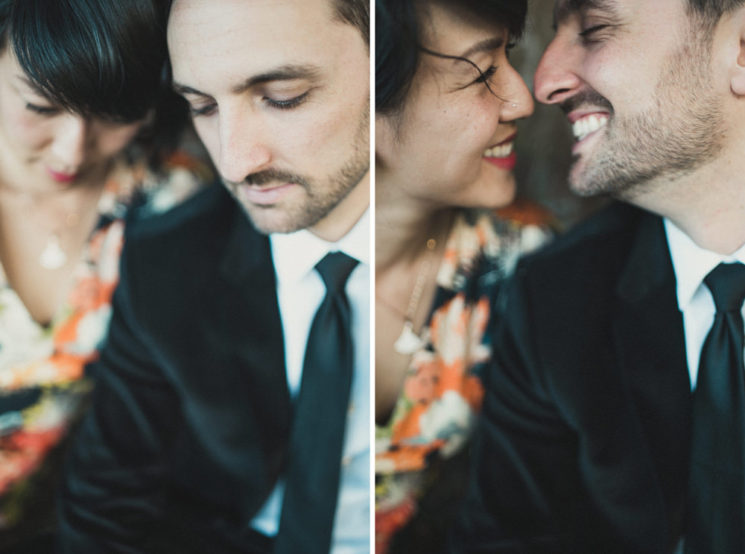 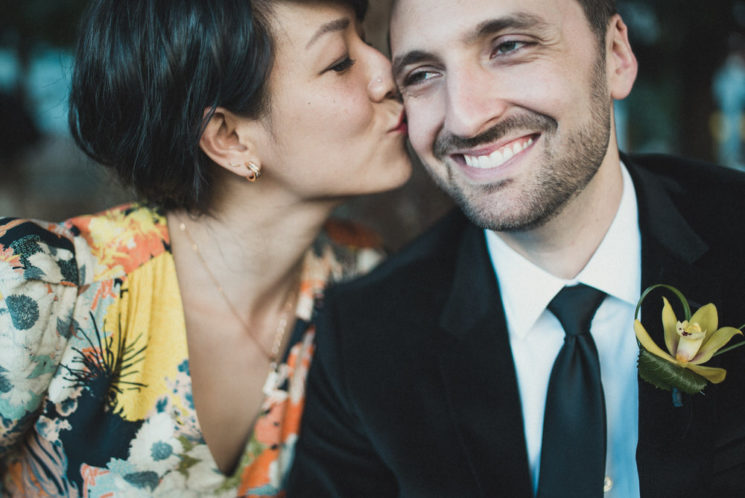 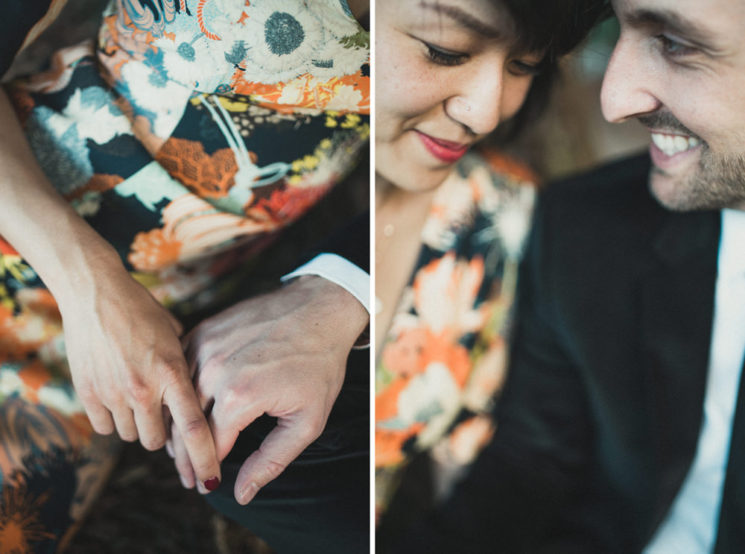 The last portrait location was in front of the Jewish Contemporary Museum and its metallic blue cube exterior. In the past I’ve defaulted to the 24mm focal length to get a wide shot of the couple in front of the immersive wall. I wanted to try something different, so I kept the aperture wide open to blur the yellow light coming through the side window in the foreground. Surprisingly, I didn’t miss the extra 11mm angle of view. 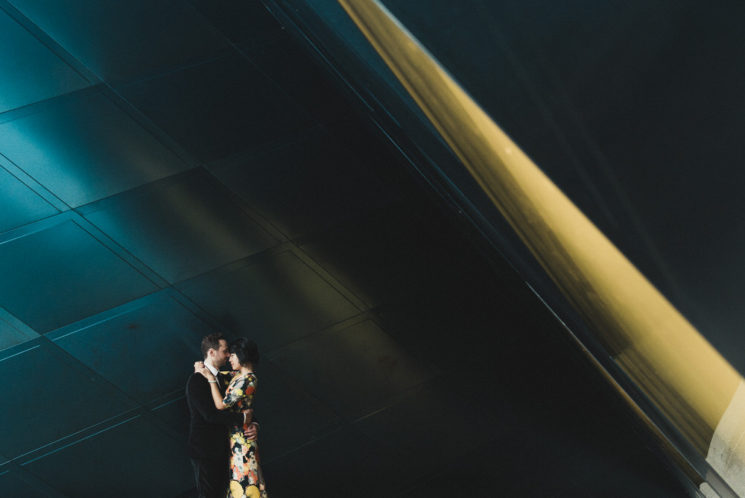 The rest of the day would take place in a dimly lit restaurant, where I was really glad for the low-light capabilities of the A7sII. Shooting at t1.5, the cine lens equivalent of f/1.4 and ISO 3200, I was able to get clean shots of the decor, food and place settings. 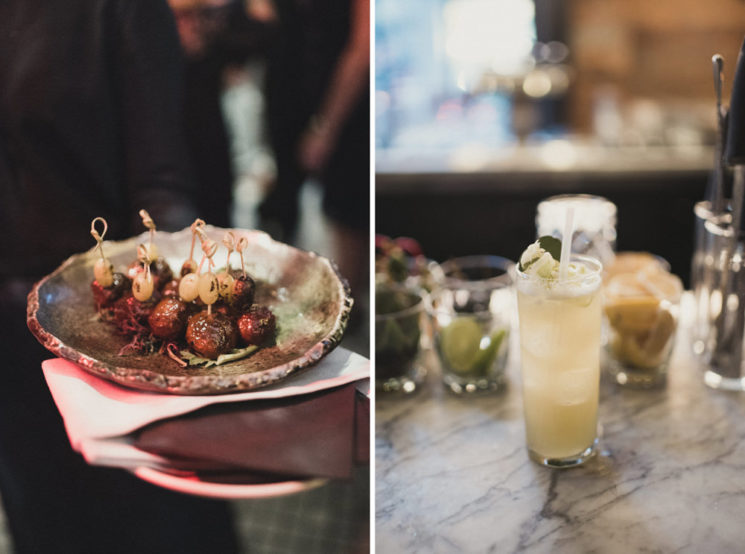 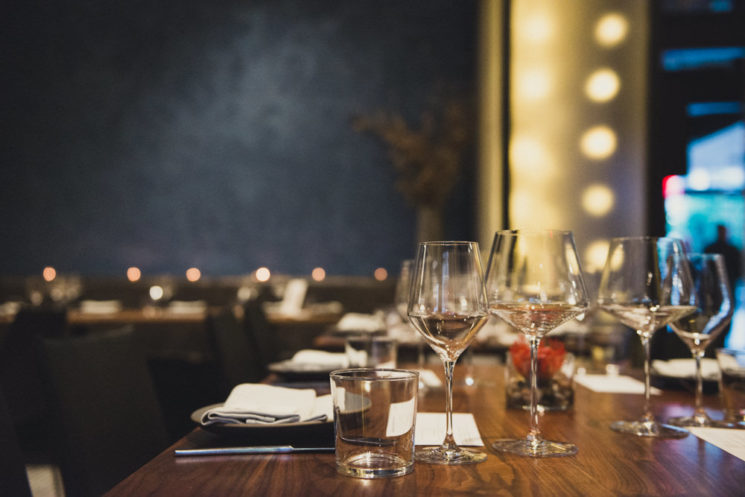 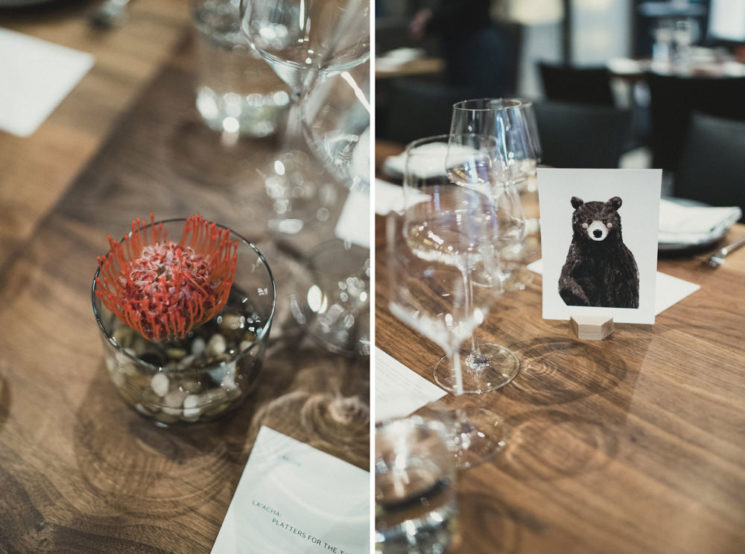 I was pretty surprised that I hadn’t switch lens up to this point, I was not going to compromise any shots for my client just to be able to say I only used one lens. I had my second camera body with the 24-70mm and a flash ready to go. I just didn’t have to use it. The space was small enough that I was able to move in close for every shot, including the ceremonial ones without blocking anyone’s view. 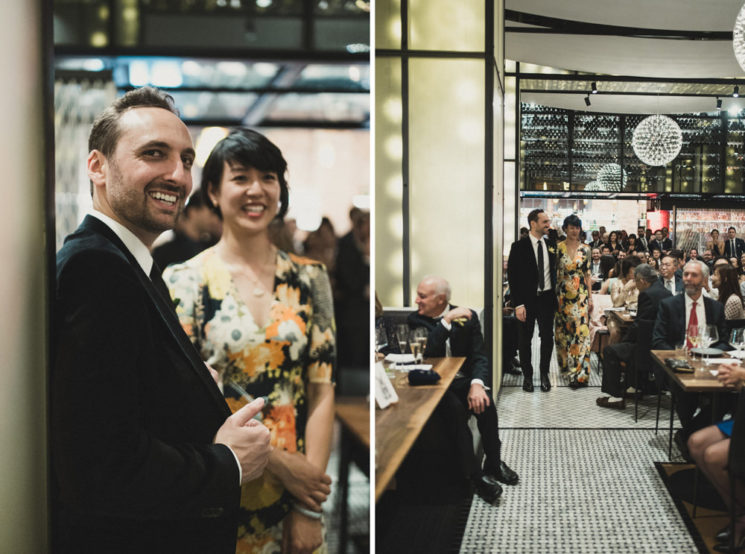 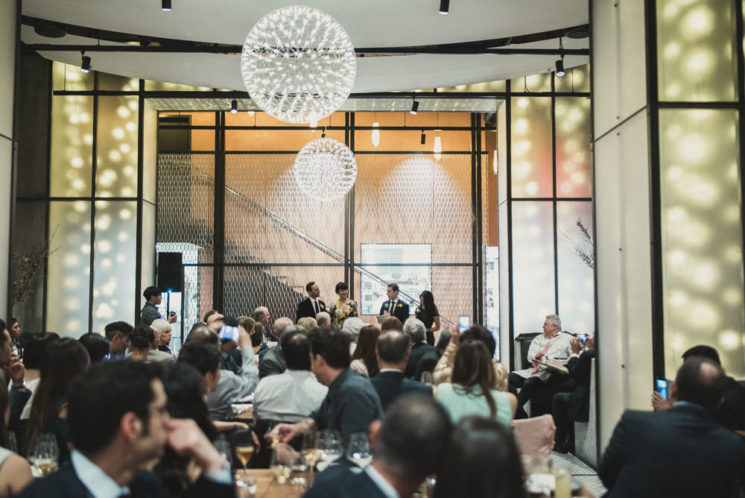 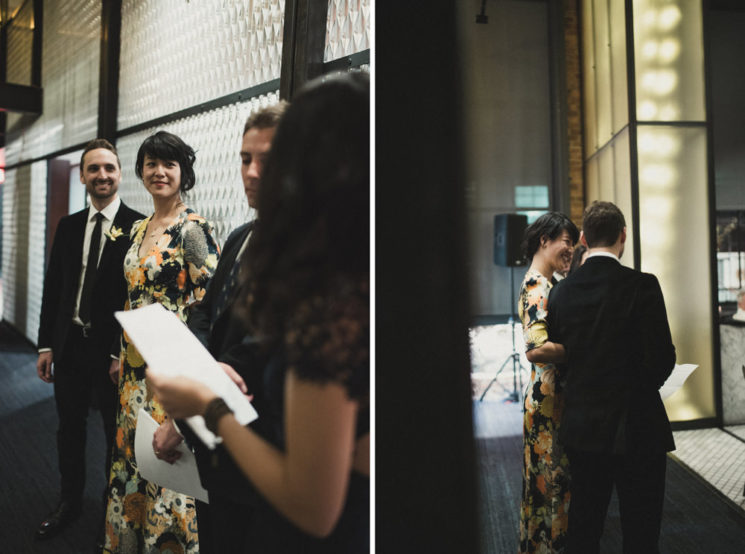 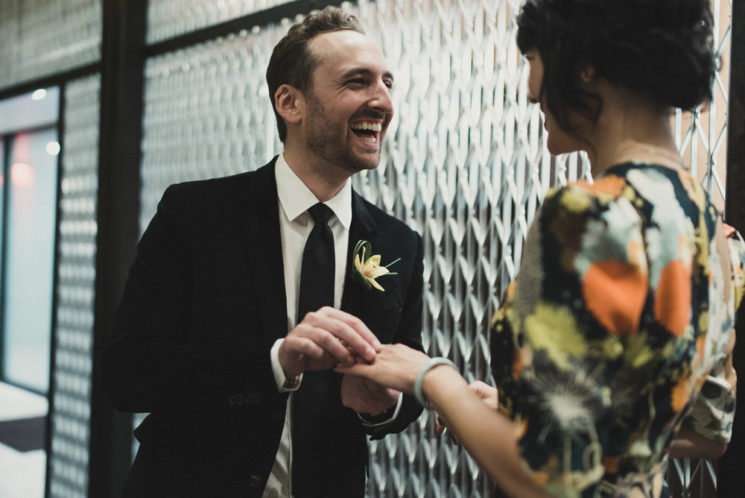 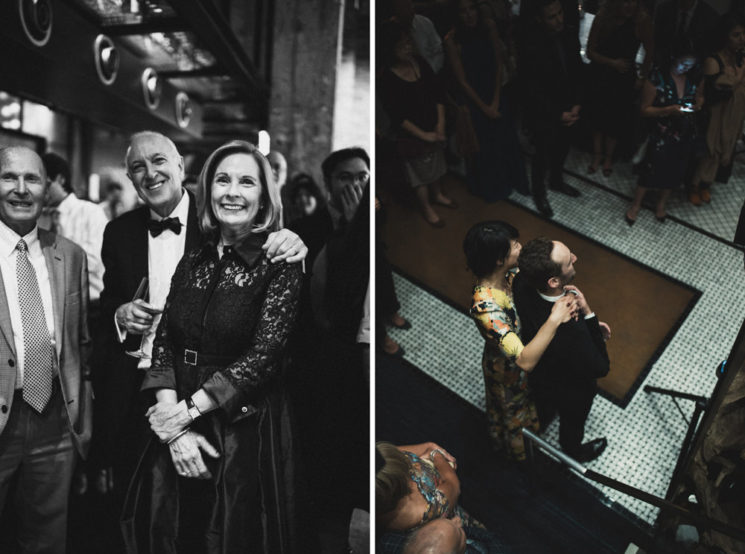 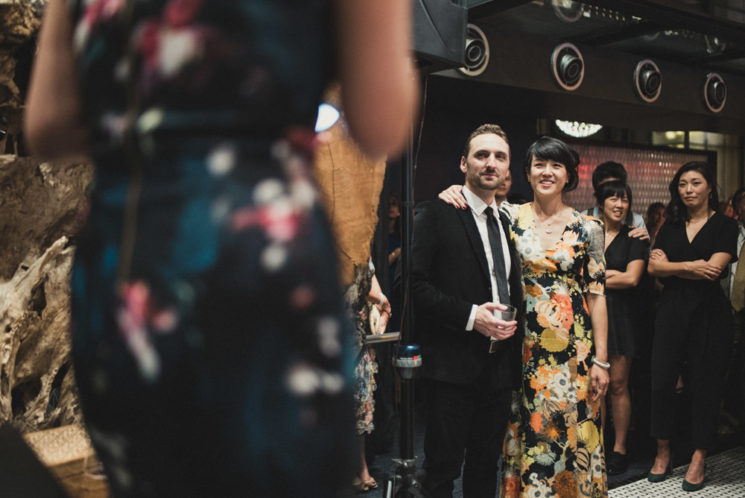 I had so much fun shooting the wedding with just the 35mm that I felt a little guilty about not using more of my gear. Shooting a wedding completely with manual focus is not something I could recommend for every photographer. It takes practice and you need to be comfortable with your gear. This is definitely even more crucial when shooting a wedding where there are a lot of blink-and-you-miss-it moments. At the same time, if you know how to use your gear and understand it’s limitation, there’s a lot you can do with just one lens.

I’ve had a lot of practice with the 35mm focal length since the Sony RX-1 with its fixed 35mm f/2.0 lens is one of my favorite travel camera. When I want to travel light, I usually just bring the 35mm t1.5 and one body. Without worrying about lens selection, I focus entirely on shooting and the moving around to get the right framing was something that became second nature. That paid off during the wedding when I moved from muscle memory, sometimes even before looking into the viewfinder.

Could I do this for every wedding? It depends. There are wedding photographers out there that use JUST the Contax 645 medium format film camera with the 85mm f/2.0 lens. That’s even more limiting, but I do think they market their work accordingly. Some carry a second back-up camera with a wider lens for a limited number of shots that require it.

If clients are happy with the range of shots I’ve captured in this particular wedding and understand I may not be able to get a tight shot in situations where my movement is limited (like a church ceremony), then I can absolutely shoot a wedding with just this lens.

Will I shoot another wedding with just the 35mm? Probably not the entire wedding, but I know from experience that I can get 75-90% of the everything I’d want from this one lens and use one of the other lens in my bag when the situation calls for it.

The full blog post of the wedding can be found here.

Kien Lam is an international photographer and filmmaker based in San Francisco. He runs whereandwander.com and believes in living for those moments that make the best stories, told or untold. He is working through his bucket list and wants to help others do the same. You can follow Kien on Instagram, Twitter, and his Facebook page. This article was also published here and shared with permission.