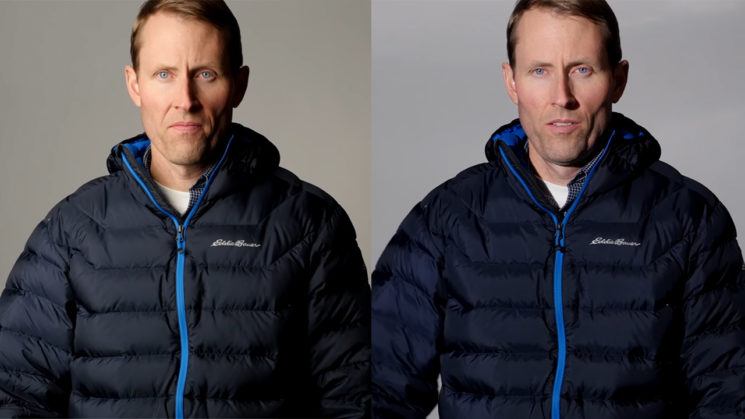 Following on from our earlier post about different types of light comes this one from Curtis Judd. The other video spoke about the various positions in which you can place a light, but it didn’t really cover quality of light. The size of the light source, how hard or soft it is.

The hardness or softness of the light can have just as much impact as the position of the light. So, in this video, Curtis goes over the difference between hard and soft light. How to achieve each, and the benefits and drawbacks of one over the other.

The main difference between hard and soft light boils down to the size of the light source relative to your subject. The Sun, for example, is the largest light source in the solar system. But, because it’s 93 million miles away, it is considered a small hard light source. This is why it produces such contrasty hard edged shadows. When we only see clouds, the entire sky becomes a huge soft light source. It can often be so soft that you can barely even see the shadows.

Here you can see, under hard light, there’s a definite shadow on the side of Curtis’ nose. There’s also a clearly defined shadow of Curtis himself projecting on the wall behind him. 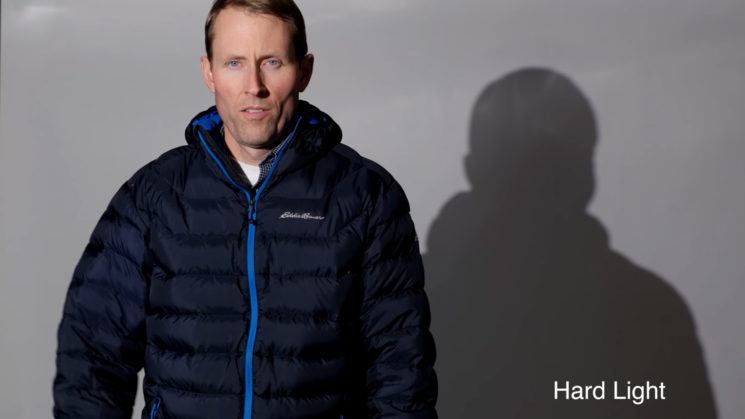 Hard light is often considered to be not a very good light, although it depends entirely on the look you’re after. Hard light can work extremely well for some images and ideas. It’s the light many photographers start with, either in sunlight, or when they first use flash.

Soft light, shown here, still provides a shadow, although it’s much less discernible, especially at a distance. You can see there’s still a shadow on Curtis’ nose, but the edge of it is much softer than in the image above. The shadow on the background is virtually indistinguishable. 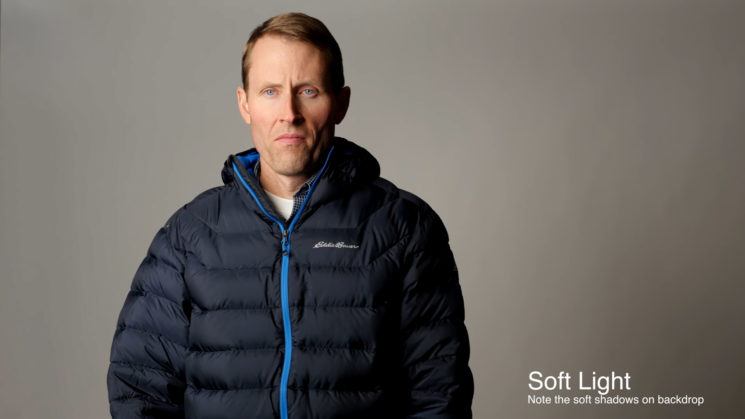 Again, this isn’t always the best light to use, but it’s not always bad light. It depends entirely on the look you want. Even when being used as a rim light or side light, they can present differently on your subject. They can provide a different mood and feeling to your image.

A soft key light is generally considered to be more friendly and flattering to your subjects. It’s used often with portraits and in corporate work. The images are meant to be inviting, warm and welcoming. Hard light is often seen as being more dramatic, perhaps even sinister, depending on the final shot. Hard light is often much more difficult to work with, due to its contrasty nature. And it definitely doesn’t flatter the older generation.

Hard light can also work well for background projections. You can simulate the look of daylight coming through a window, for example, with a simple cardboard cutout.

Curtis also talks about focusing the light to create more of a spotlight look. Some lights support this natively. Others may require Fresnel adapters. Or you could use something like the light blaster.

Ultimately, the decision is yours as to which you go with. Neither is good or bad, just good or bad for a particular look. Figuring out which will best suit the look you need usually comes with experience. So, get out and try both, see how it affects the final image for yourself. And don’t forget to move the light around, too.

Which do you usually prefer for your main light source? Hard light or soft?