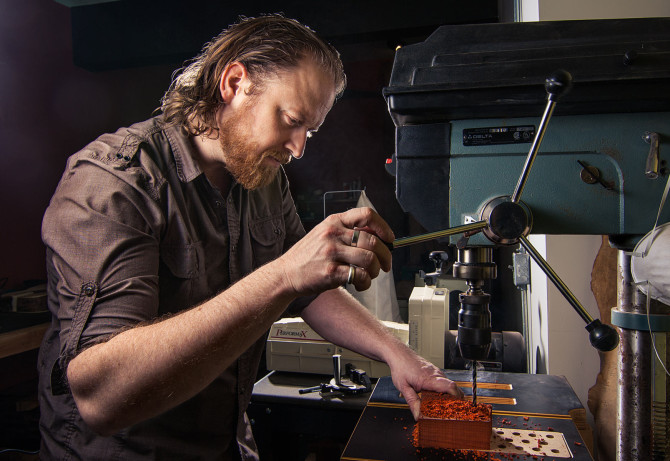 Luthier Sean Farley in his workshop, shot with the LiteTrek 4.0 in a dual-light configuration.

One of the greatest dilemmas for photographers using off-camera lighting on location is achieving the balance of light output and portability. For those of us not wanting to break the bank, cost is a giant factor as well.

The LiteTrek 4.0 from Impact is a DC-powered portable lighting kit aimed at achieving all of the above and does so quite effectively.

Now, don’t get me wrong, this is by no means a Profoto setup, but, on the other hand, it’s not a cheap eBay kit that comes at $75 per strobe and breaks within 30 minutes. The LiteTrek can be purchased as a single – or double-strobe kit, the most expensive one currently coming in at just under $900 (regularly $1,149).

The LiteTrek 4.0 combines the power of studio strobes with the flexibility and mobility of (only slightly bulkier) monolights. In addition to that, there are some sweet nuggets of awesome that are built into the package as well. 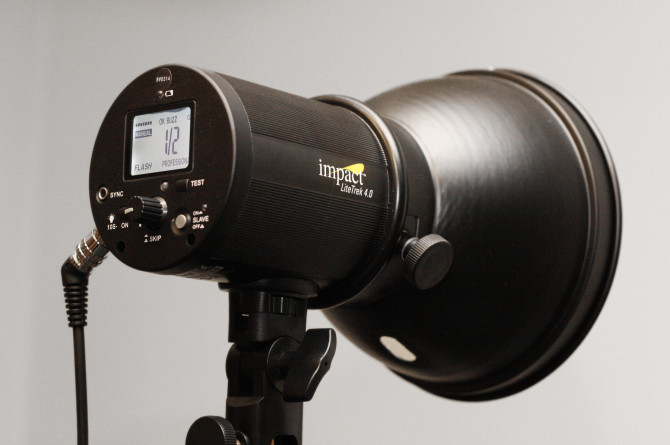 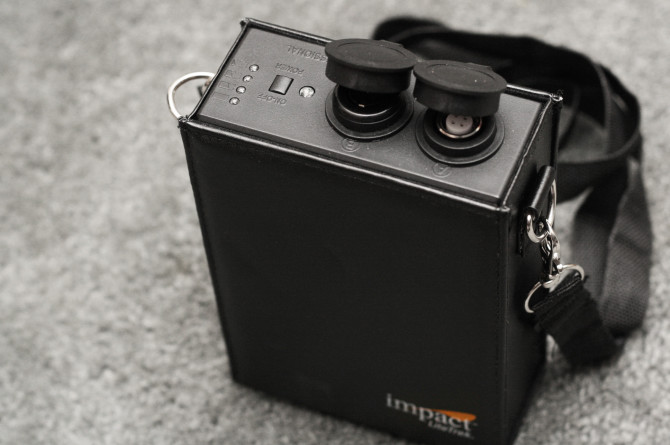 The LiteTrek comes with a 400 watt/second flash head, a compact battery pack, and an aluminum carrying case. To be a bit more specific, you get: 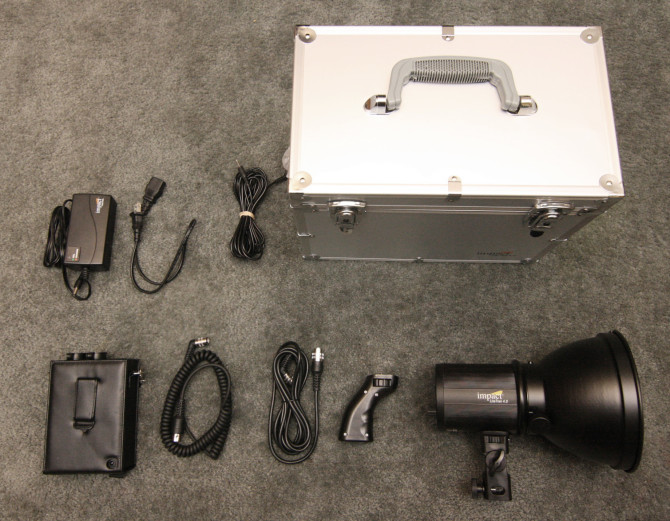 First off, the compactness of the battery pack impressed me. There are many different portable power options for strobes on the market, but this, especially since it’s run off DC power, seems to hit the nail on the head. At approximately 4”x6”x2”, this little baby is the essence of portability and packs quite a punch to boot. The belt clip is very sturdy and is great for attaching to an assistant for a roving light, although the carrying strap is rather cheap and is something I will probably end up replacing.

The flash heads themselves seem rather well-made, although, like I said, these aren’t high-end units built to take a Soviet bombardment. They are simple, straight forward, and to the point, which is all that really matters anyhow.

I picked up the kit that includes two flash heads, and I was rather disappointed to discover that the aluminum carrying case is only made to hold one flash head along with the battery and necessary cables. So, until I get a better option (like a Pelican case), my second flash head is simply being housed and transported in its original box.

All in all, I was fairly impressed and ready to give them a test. 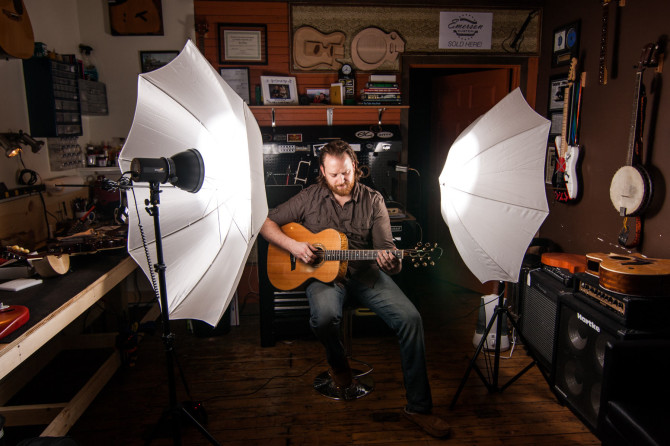 In a real-world application, these lovely ladies performed beautifully, and, at times, almost too beautifully. Personally, I wouldn’t trade them for speedlights when working on-location.

I had been chatting for a while with Sean Farley, a local musician and custom guitar maker. Sean and I had originally become connected through a random photo I happened to snap several years ago while wandering past his shop door during a First Friday event. Then there were the photos I had casually snapped of Sean and his band performing in the lounge before the Jackson Browne concert a year later. I figured this would be a perfect opportunity to do a full shoot with him, so we made it a date and met at his shop in Williamsport.

During the course of about four hours, I put the lights through a series of tests, from simple, still life, single-light setups to some action and multi-light portraiture. They performed flawlessly, even when paired with a YongNuo YN-468 II. Their ease of setup, light output, and portability were great! Being able to hang the battery pack off a light stand (via the carrying strap) and shoot away with fast recycle times provided a great workflow that I have never experienced when using speedlights on location. 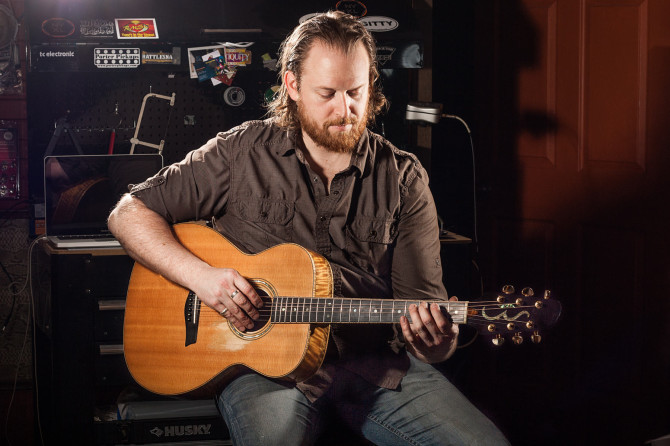 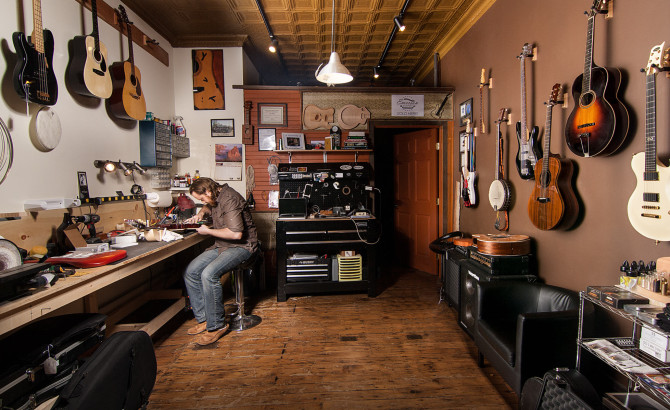 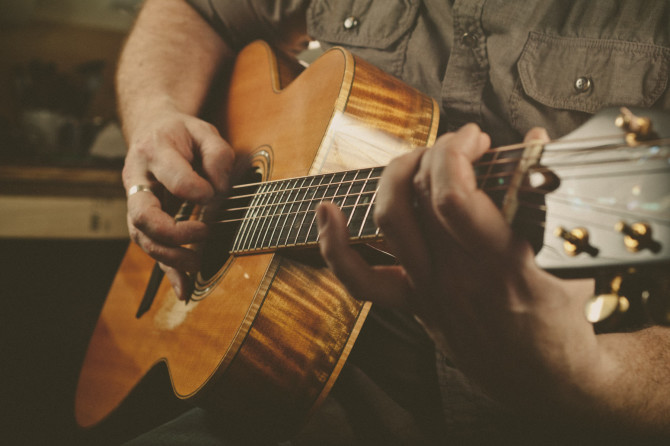 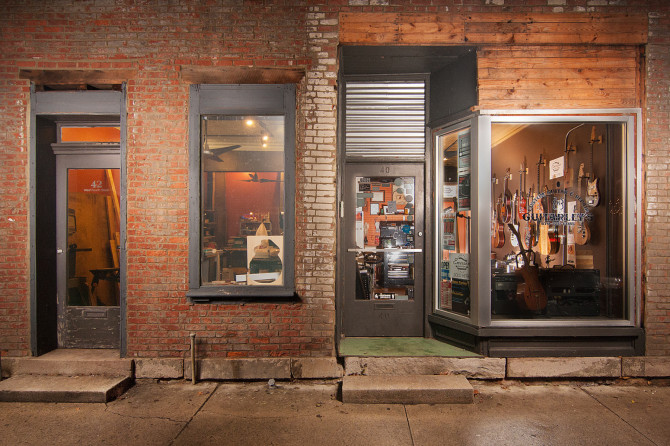 My brother has been in from college for Christmas, and being a fellow artist himself, we always try to collaborate on something while he’s visiting. While staying with us for several days, he and I decided to head off into our woods to an old, abandoned mobile home (seen here in a brief video I put together showing the DIY Hot Shoe Adapter), complete with its own set of decaying props. Honestly, it’s a great little photography set that someone (I’m assuming the previous owners of the property) just left sitting in the middle of the Pennsylvania countryside.

I wanted to create an image that conveyed isolation and self-betrayal, a progressive modernist trapped by his surroundings, emotionally defeated yet still dreaming of one day breaking out. And, my brother made the perfect model for the concept in the dilapidated setting. 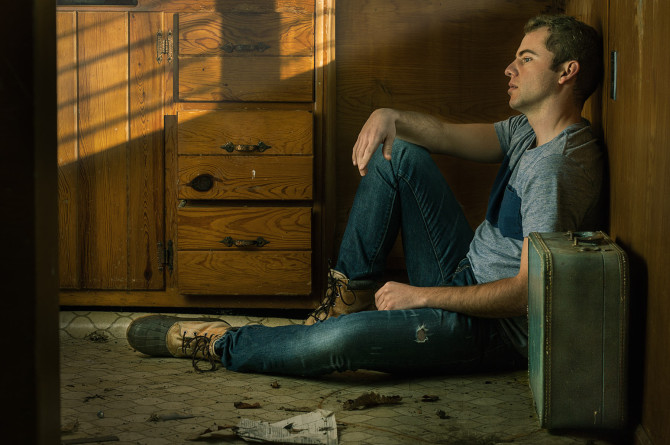 Shot using the LiteTrek 4.0 in a single-light configuration balanced with ambient light. 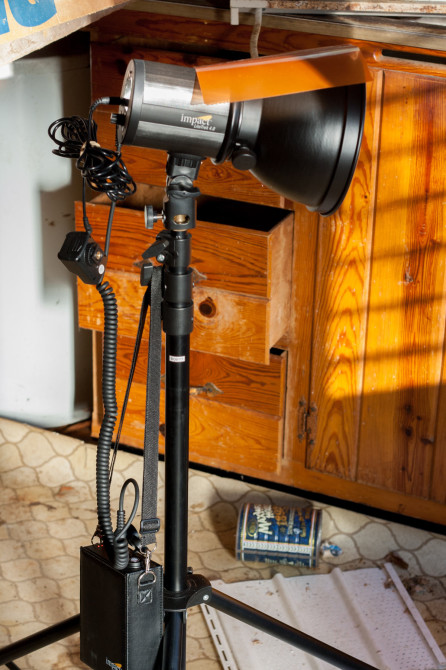 And…the obligatory portrait, once again, shot in the abandoned mobile home using only the LiteTrek kit and camera to control the lighting. The image was actually shot in the small yet brightly-lit living room, but with the lights turned down all the way to 1/64th power and the camera maxing out its compensatory settings (ISO 100, f/11, and 1/250s), the background dimmed to a beautiful black. 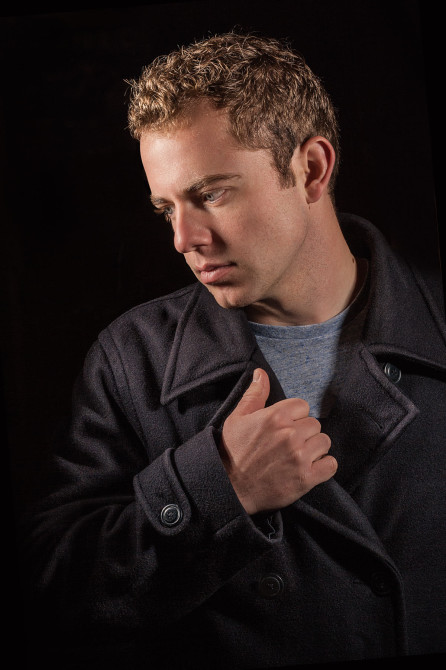 And, let’s not forget the obligatory “thriller movie poster.” 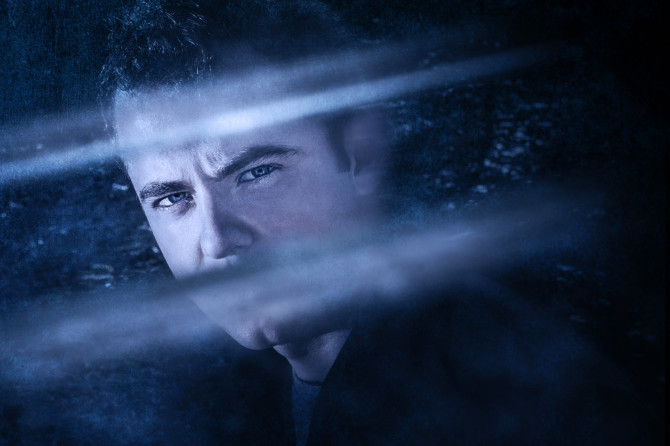 Honestly, I love the kit. It’s intuitive, powerful, and the essence of portability. But, to give you a more thorough rundown, here you go.

The Power
There’s really only so many ways to say it. When it comes to illumination, 400 w/s is a lot of power, whether you’re trying to overpower the sun, light up a darkened room, or darken a background. Add a second unit to that, and 800 w/s is an on-location dream for most applications.

Ease of Setup
These are pretty much idiot-proof. It’s plug-and-play, and, when using something like the Impact light stands, the setup is quick and virtually effortless. And, considering that each flash head is the equivalent of multiple speedlights, the lack of hassle is a huge plus.

Sturdiness
These aren’t extremely heavy or bulky lights, but they are more weighty than speedlights, which I find more appealing for the same reason that car manufacturers add extra weight to car doors to give you the satisfaction of a good “thud.” Also, when using them outdoors, they seem to be a bit more stable than speedlights if there is a bit of a breeze, even with no extra weight at the bottom.

Endurance
As mentioned earlier, the LiteTrek boasts the ability to squeeze hundreds or thousands of flash cycles from a single battery charge. If using two lights connected to the same battery, those numbers would theoretically be cut in half. However, I have no complaints with the longevity of the battery life at all. The one day I was shooting for about four hours with a combination of one and two lights, mixed and varying powers, and the battery gauge only dipped 25%. Twenty-five friggin’ percent!

Recycle Times
The recycle times are outstanding for these units. When using both lights connected to the same battery, the recycle time essentially doubles, but for anything from 1/4 power and down, the time is negligible and virtually instantaneous.

Slave Mode
It’s been my experience that optical slaves can be kind of finicky, only firing in the right conditions, etc. Yet, the LiteTrek’s slave functionality is flawless, firing no matter the circumstances, even when the slave is hidden behind a wall in another room. 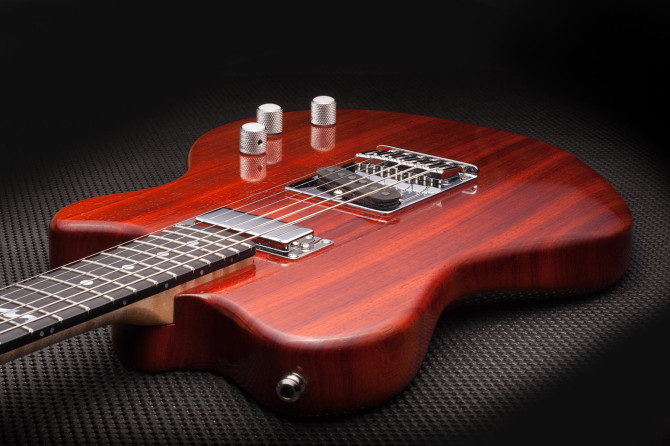 A recent custom-build by Sean, photographed using the LiteTrek 4.0 in a single-light configuration with a circular diffusion panel.

The Umbrella Holder
While being a great built-in feature, initially getting an umbrella shaft to fit is a bit of a problem. (No jokes. We’re adults.) I was actually afraid of breaking it the first time I put it in. (No jokes!) But, after the initial insertion, each subsequent insertion was very easy, and the built-in mechanism to hold it in place functioned fine.

The Light Stand Connector
For the most part, this functioned fine. Where I ran into issues was where I tried to remove the connector from the one flash head, such as to attach it to the included pistol grip. I experienced a lot of clicking that felt like it was eating something away inside, and I can only attribute it to having to force the initial entry of the umbrella shaft into the holder located just below the tightening wheel.

Lack of Cordage
The LiteTrek comes with two cords per flash head, each with a different power plug that will connected to either one or the other of the battery’s power outlets. The range of motion when using both lights connected to the same battery pack is kind of limited for certain applications, but this can be remedied by purchasing a second battery or (perhaps) by purchasing a longer cord. 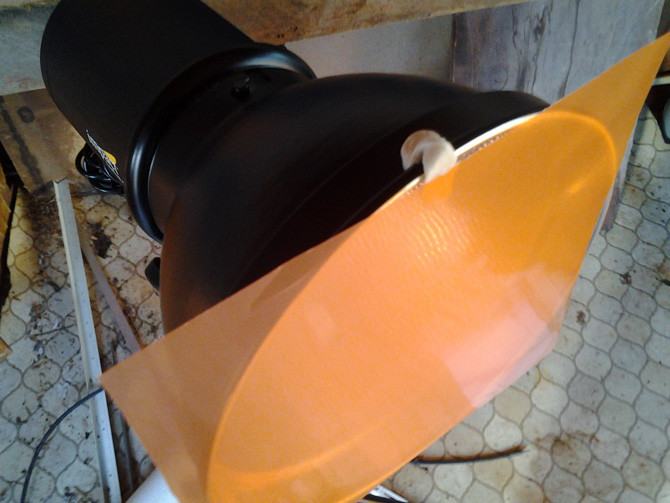 These kits are great for location work, whether indoors or out, offering excellent light output coupled with amazing battery life and portability. Add to that the current price point, and I would definitely recommend them for those with a little extra cash who are looking to expand their gear.