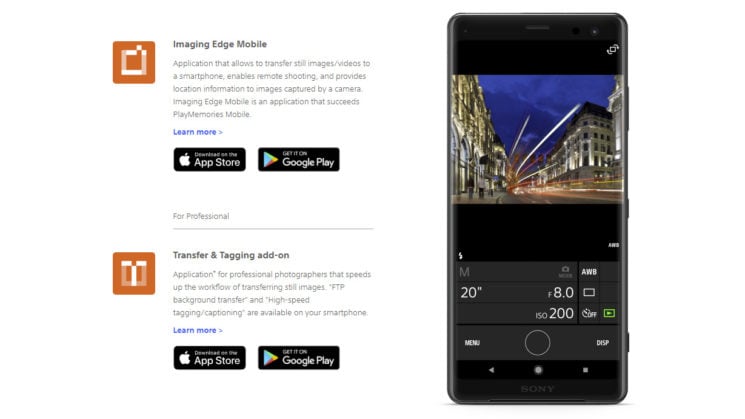 Along with today’s release of the Sony A9 firmware v5.0, Sony as also released a pair of mobile apps. Sony Imaging Edge Mobile now replaces the somewhat terrible PlayMemories app, and there’s a new Transfer & Tagging add-on for it which enables continuous FTP transfers in the background (for the Sony A9) which they claim doesn’t affect continuous camera use.

The background transfer currently only seems to apply to the Sony A9, thanks to the new v5.0 firmware released today. The new firmware for the A9 also allows high bit rate 4K video transfer from your camera to your mobile device, too. Presumably, this feature will also come to the Sony A7III and A7RIII in a month or two when they get their new firmware updates, too.

As with the previous PlayMemories app, you can capture photos remotely using P, A, S and M modes, and preview your shot on your mobile device’s display. Cameras that have the “location information linkage function” can also acquire GPS data from your phone and saved into the file on your camera.

The Transfer and Tagging add-on works with the A7III, A7RIII and the A9, however, the FTP background transfer requires the A9 with the new v5.0 firmware for now. It also offers voice input with voice recognition for tagging your images, as well as recalling your own IPTC metadata presets to automatically fill in various details for you.

While the new app was supposed to be a reinvention, a big drastic change from the PlayMemories app of old, the reviews on the Google Play Store so far aren’t so positive, with every review left today except for one being one star. Of course, the previous app hasn’t been doing much better. But from reading the reviews, the new app isn’t really any different to the old one – unless you own an A9, perhaps.

If you want to check out the new Imaging Edge Mobile app and the Transfer & Tagging addons for yourself, they’re available for Android and iOS now, and you can get more info and find links to them all on the Sony Imaging Edge website.

« How I did this pink & red studio shoot: a step-by-step breakdown from planning to post-processing
This is one street photographer’s philosophy to create stories out of chaos in the city »