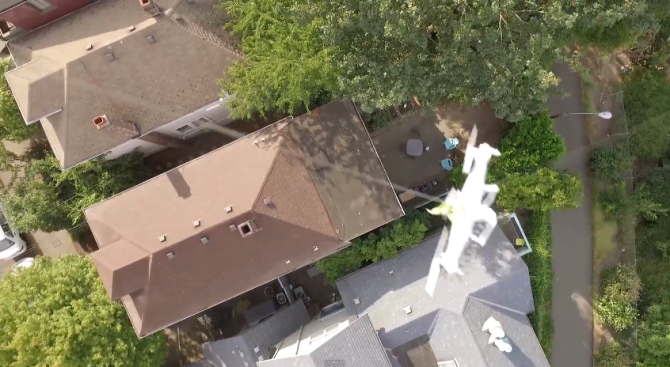 Drunken friends:  We’ve all had at least one, but chances are not all of us have had ones that lost our quad copters on neighbors’ roofs.  That is not the case for Harrison Howe who’s roommate drunkenly lost his Syma X5C on an inaccessible roof down the street.  Without being able to actually get onto the roof (imagine THAT conversation with a neighbor!), the drone sat there for two months until Harrison devised a plan for an aerial rescue.

“After upgrading to a larger drone, I attempted a rescue of the smaller drone using hooks I made from coat hangers,” he explains.  Monitoring rescue efforts from the ground via a live feed, he expertly guided a DJI Phantom 3, set the hooks, and brought the lost fellow home.

Syma seems to be a pretty decent poor-man’s alternative to more expensive drones, like the DJI Phantom.  Coming it at about $50, they don’t have all of the features that are packed into its more expensive competitors, but, hey…it’s fifty bucks.  The cameras are not GoPro quality and lack a stabilizing gimbal, but I’m almost tempted to get one and modify it for a better camera.  Where there’s a will there’s a way.

Now, if we could just send our drones on beer runs…