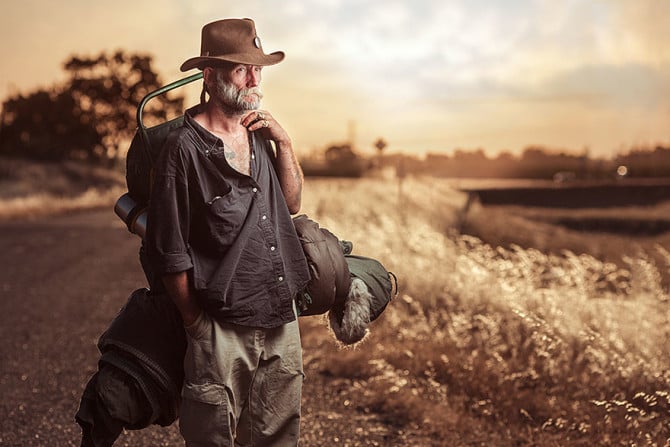 As photographer Aaron Draper believes, photography of homeless individuals is quickly become a cliché.  “Far too often, photographers who are searching for urban wildlife stalk the homeless. Unfortunately, this does nothing to increase our understanding of their lives or situations; it just shows how we are elevated and photographing them from a place of privilege.”

His artistic response was to photograph the homeless with the same attention and dignity that he would any traditional client, trading in the typical black-and-white for color, and bringing a mobile lighting setup with him.  His goal isn’t to share an image that makes us feel bad for a moment and whisper a half-hearted prayer before going on with our privileged lives.  His goal is to share lives.

Aaron, a professor of photography at Chico State University, created Underexposed, a project years in the making, to “enable people to gain a more humane view of the homeless.” 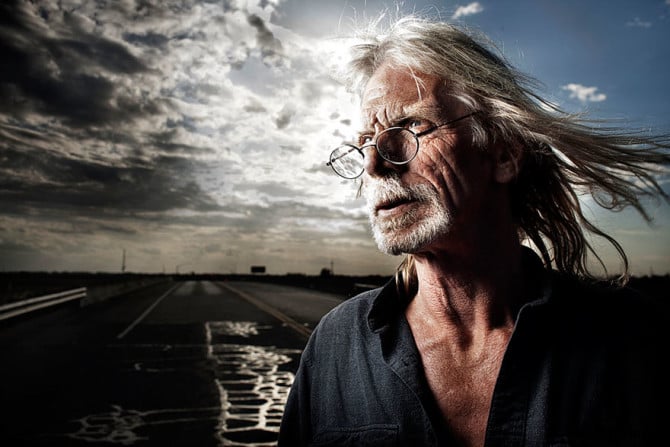 Tell us a little about yourself and your background in photography.
I started college with the goal of becoming an artist. After several semesters there, I realized (as did my professors) they I couldn’t draw anything from my own imagination, I could merely make perfect copies of things I could see. Not being able to clearly “see” the ideas in my head had me thinking that I should change course. That next semester I enrolled in English courses and settled on becoming a writer.

I actually began my photography career as a writer for a small-town newspaper. The photographers there noticed I had an eye for design and encouraged me to continue on with my photographic pursuits. After several months under their mentorship, I started photographing my friend’s weddings for $50 and they had to purchase and pay for the development of the film. 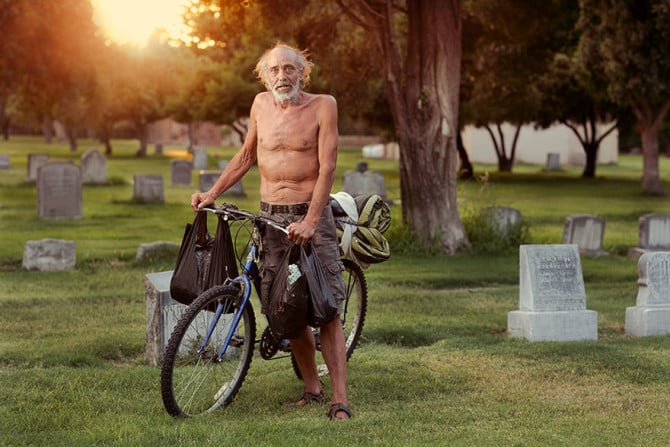 How did you conceive the “Underexposed” project?
The Underexposed project came about after I’d spent several hours editing and removing every wrinkle from a client’s face. I left the studio that day with my camera in hand and was hungry to photograph something different. I’d been photographing portrait clients for 11 or so years and doing my best to make them look good.

As I drove around town I kept noticing homeless people in various parts of Modesto. As I slowed to observed them I noticed that their faces were full of texture from years of street experience. Their clothes were torn and their hands were weathered. I was struck at what beautiful portraits they’d make and how the lines on their faces revealed the lives they’d lived. It was a stark contrast to the smooth, featureless faces that were popular for professional portraits.

I pulled over and stopped and talked to a man named Leon. As we spoke, he revealed that he was originally from Louisiana and had once owned a shrimping boat. His eyes shone as he dove into great detail about the various recipes that he’d used to prepare. When he asked what I did, I told him that I was a photographer. He response was, “You can photograph me.” And I did. And his portrait revealed a smiling man hanging over a cyclone fence with a blue sky behind him. He didn’t ask for any money, but it felt right to give him something for his time. As I drove away from Leon that evening, I was moved by the fact that he was an interesting human being with a story that I would never have associated with a homeless person. Questions swirled in my head and those questions were replaced with actions. If I was curious about their stories, I was sure that others would be too. Once I posted Leon’s image on Facebook, the public’s response reinforced the feeling I had to start a personal project of homeless and their stories. 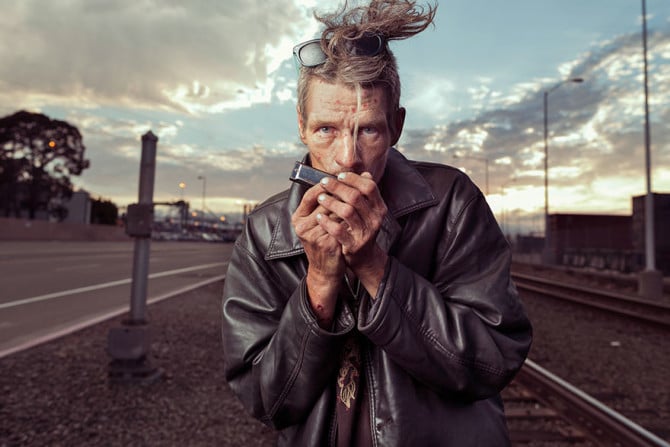 Did you have any particular goal from the outset, or has the project sort of morphed as it’s gone along?
The project has definitely changed over the years. I’d say the process and the project really became streamlined when I proposed the topic as my Master thesis project for the Academy of Art University in San Francisco. Because I had to constantly articulate the motives for the project and how it was progressing, it helped me really understand why I was doing the project and the importance of it in my life and the lives of those who I was trying to change. I began broadening the project to cover all of California instead of only Modesto. I also began working with local agencies that advocate for and serve the homeless community. It all started to come together. I would pay the homeless for their portraits; get a signed model release from them. Then I would return and give them their photo. I would also give local agencies permission to use the photos to help increase awareness about the homeless plight. It was a “win win” for everyone involved. With the local agencies involved, they would help me find subjects to photograph. This helped me spend less time navigating the streets in Oakland at 2 a.m. and gave me more face time with subjects who understood my project and were happy to participate. 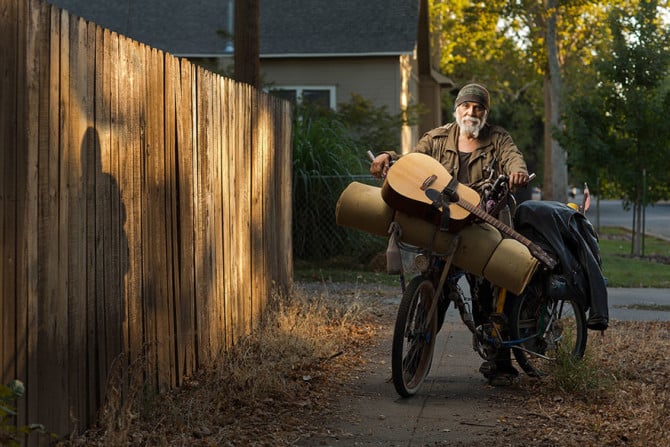 Did you approach the project as a compassionate observer, or were you more empathetic, somehow identifying with the personal struggles of your subjects?
I approached the project as a guy who was trying to learn about another man or woman that happened to live on the street. The homeless would often tell me I’d perfected my pickup line because I seemed so natural talking to them. In the beginning, most of them thought I was a cop. I had to ask them, “You think a cop would be out here with this lighting photographing you like this?” I grew up pretty poor and while I was never on the street, I had a soft place for those who did wind up there. 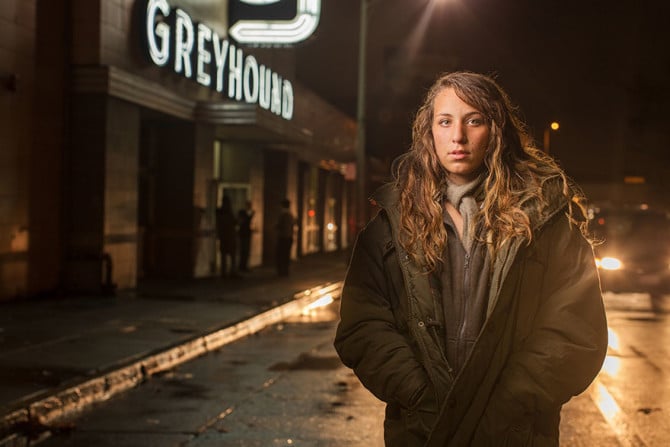 We hear poverty referenced so frequently, especially in political rhetoric.  Do you believe there is a chasm between the words we hear and the reality these people are facing?
I think there is a lot of talk about the poor and the homeless in this country. Unfortunately, the people with most of the power have never been poor or homeless so I think it’s very difficult for them to relate. They don’t understand why someone suffering from schizophrenia is walking around barking at cars in Chico. He is off his meds and isn’t in a sound enough state of mind to get back on them. If he gets put in jail, our police aren’t equipped in dealing with the mentally ill so the problem escalates. It’s just such a different life for those that live on the street. While their basic needs are same as ours, they go about their life in a very different way trying to satisfy those needs. It’s a daily struggle. 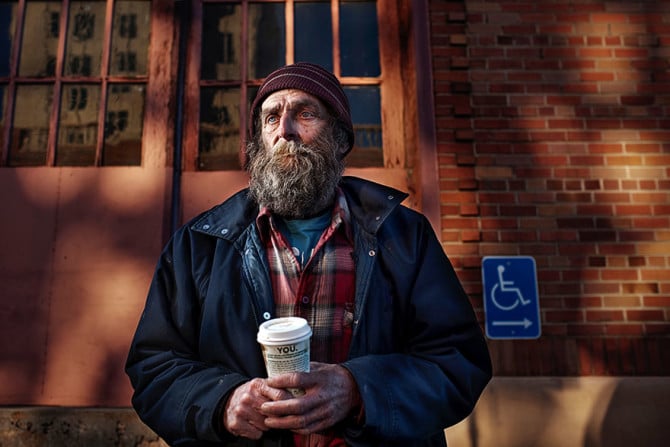 How did you go about finding or selecting your subjects and then obtaining their permission to photograph them?
When I’m looking for subjects to photograph, I usually base it on two things, their story and their face. While I will pay everyone I photograph, I generally display the ones whose stories resonate with me and whose faces mirror those stories. I try to position myself near a group of homeless people or a couple of individuals and I’ll wait for hours as they begin to accept the fact that I’m sitting there and I’m not a threat. Slowly we begin to communicate and the more interest I show in them, the more interest they show in me. Then comes the golden question, “What do you do?” And that usually opens the door to us working together. 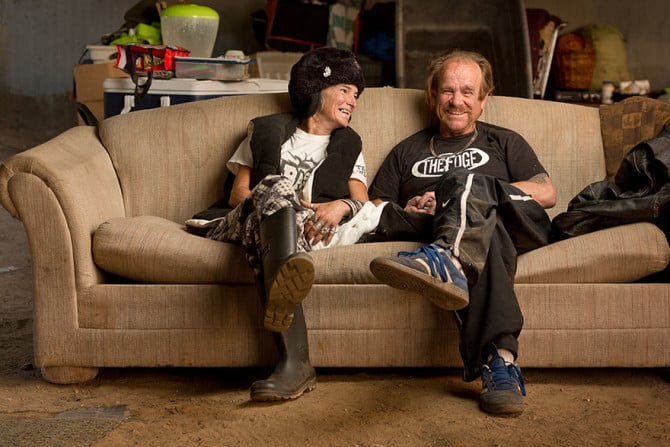 What type of attitude or demeanor do your subjects exhibit?  Is there any sense of shame or defeatism?…perhaps a quiet determination, or simply a calm resolve and acceptance of who they are as individuals?
I think most of my subjects show a quiet determination, a strength. I think this comes from them understanding that I’m not there to exploit them. I also talk to them about the project beforehand and let them know that I want to show them in a beautiful way and that other people will be seeing these portraits. I tell them from the onset that I respect them as individuals and want to produce a portrait that will change how society views the homeless. I think that having this pep talk before we go into the shoot is very helpful for them. 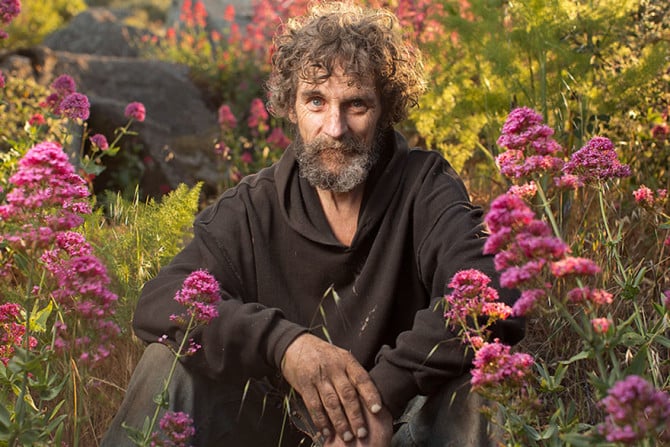 What is your process for actually shooting the portraits?  I know you used a variety of off-camera lighting to achieve the effect you envisioned.  How did all of that come together?
I’ve been using off camera flash for many years before I started using it with my homeless portraits. I began back at the time of Zack Arias and Joey Lawrence and started using a small 12×12 softbox with a speedlight inside mounted on a monopod. This allowed me to light with my left hand and shoot with my right. It was a tricky maneuver, but I rarely had assistants. It’s hard enough trying to not spook the homeless community by yourself and when you bring someone else, it’s even more difficult. As the project developed and I need more light, I opted occasionally for a 5ft octagon with an Einstein head and a Vagabond Mini. This became my standard kit when I was driving around looking for subjects. 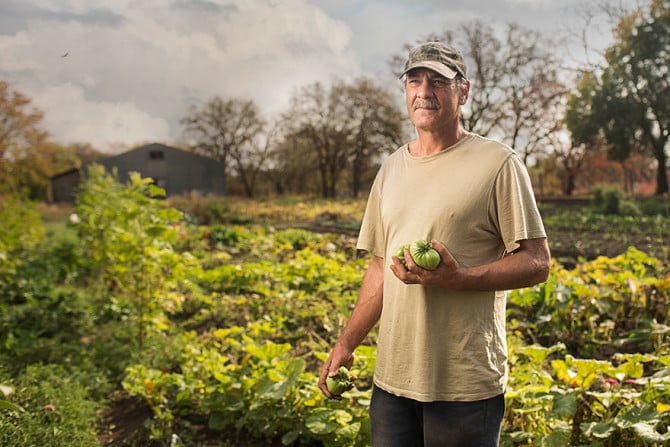 If you could say one thing to aspiring photographers, what would it be?
Everyone is a content provider today. So you can’t just provide content. Millions of images go out to the world daily on Facebook and Instagram alone. My first piece of advice is learn to communicate visually. Learn the rules of the visual language you’ve chosen so that when you do communicate, your viewers are understanding your message. The next piece of advice is to try to change the world with your photography. I know this might seem outlandish but most anyone these days can take a pretty picture but not everyone can visually communicate so as to change someone’s heart and mind. Be a photographer that changes the hearts and minds of those that view your work. Strive for nothing less. 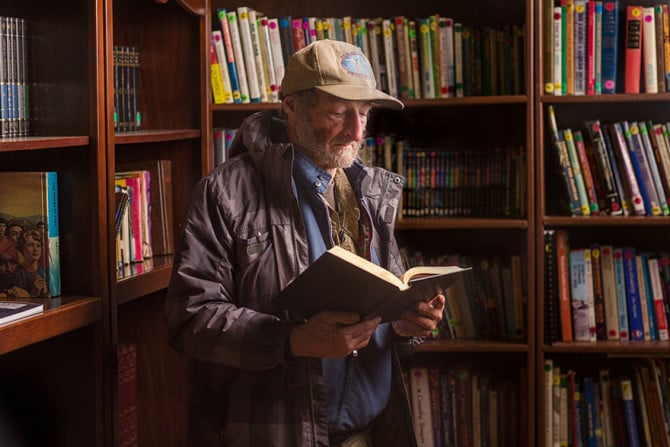 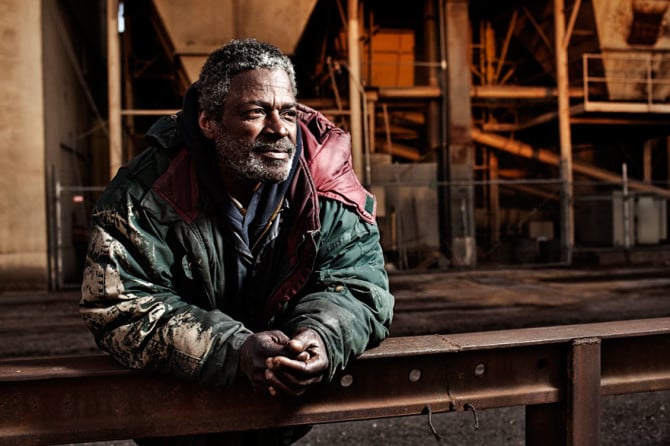 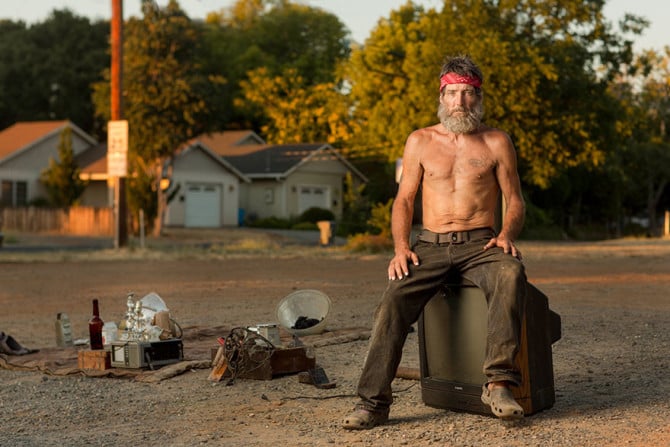 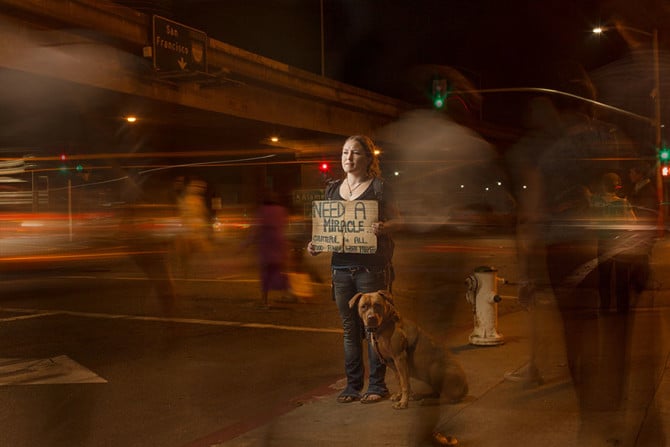 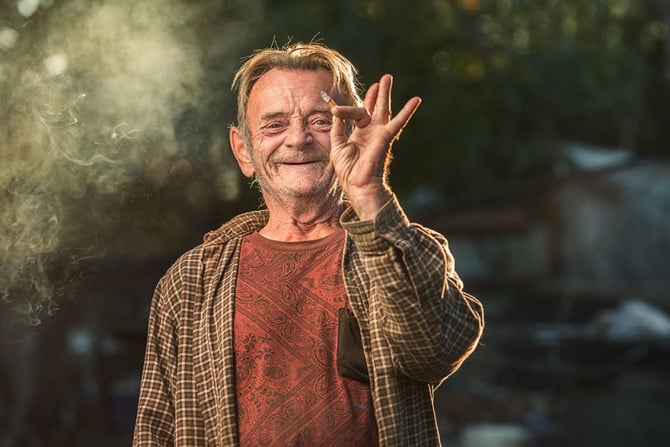 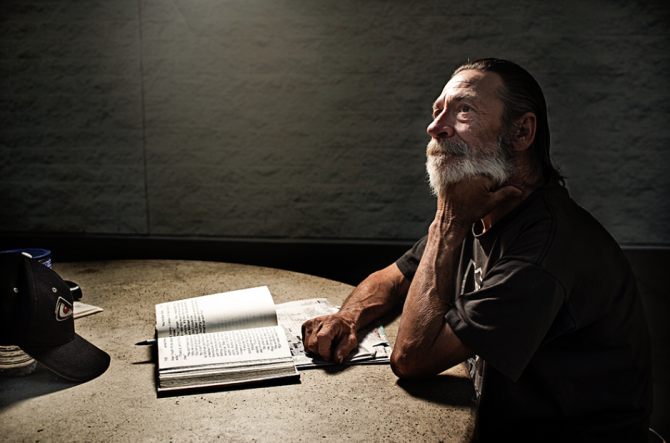 I want to thank Aaron for taking the time to give us a little more of a glimpse into this evocative-yet-encoraging project.  To see more of Aaron’s incredible work, head on over to his website.