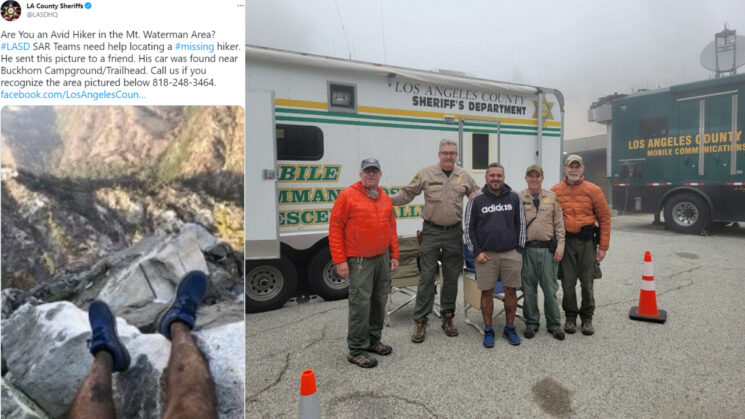 Oftentimes, people posting photo of their feet while hiking can be a little annoying. But sometimes, sharing a photo like this can lead to an epic rescue. A hiker lost in the mountains of Southern California was rescued after a Twitter user located him this way. He used nothing but a blurry tweeted photo of – his feet.

Rene Compean (46) was lost in the California mountains and reported missing on 12 April at 6 PM. As The New York Times reports, the rescue teams started searching for him immediately after he was reported missing. However, his phone battery died, so the last photo he sent to his friend was the only thing they could rely on.

Los Angeles County Sheriffs Department (LASD) wrote in a press statement that Compean didn’t turn on his phone’s location, “so team members were unable to get his location code from the photo.” So, LASD turned to social media. They tweeted the low-res photo Compean had sent to his friend hoping someone would recognize the location in it.

Are You an Avid Hiker in the Mt. Waterman Area? #LASD SAR Teams need help locating a #missing hiker. He sent this picture to a friend. His car was found near Buckhorn Campground/Trailhead. Call us if you recognize the area pictured below 818-248-3464. https://t.co/Xi0VL6Mxfi pic.twitter.com/1lUMrgj4y9

The hero of the day was  ham radio operator Benjamin Kuo, known on Twitter as AI6YR. He tweeted a series of satellite images of the Mt. Waterman area along with the location where he thought Compean might have been. Being an avid hiker himself, Kuo recognized the area from a single photo.

3D view of current terrain (4/8/2021 satellite image) looking towards Mt. Waterman from the South (39 is the road on the right, Angeles Crest behind the hills on the top side of the image) pic.twitter.com/X6LO3U3glS

But how? Well, Kuo traces wildfires in the area using satellite cameras. He also has a hobby that really came in handy. “I’ve got a very weird hobby, which is, I love taking a look at photos and figuring out where they’re taken,” Kuo told NBC Los Angeles.

So, he put this hobby of his to a good use. Search and Rescue Teams (SAR) found Compean safe and sound on 13 April, and he met Kuo online the same day. It’s quite a story, and it warms my heart that everything ended well. But who would have thought that an Instagrammable photo of feet could save someone’s life?