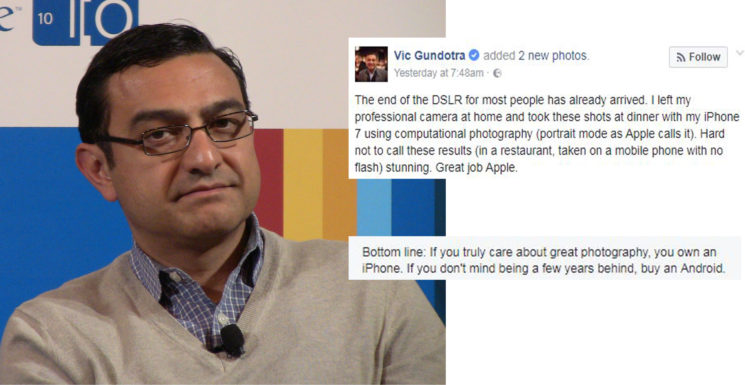 Vic Gundotra, Google’s former Senior Vice President, recently published quite a passionate praise of the iPhone 7’s camera. He didn’t just call it the killer of DSLR, but also pointed out advantages of the iOS over Android. Not something you’d expect from a former Google’s SVP, right?

The end of the DSLR for most people has already arrived. I left my professional camera at home and took these shots at dinner with my iPhone 7 using computational photography (portrait mode as Apple calls it). Hard not to call these results (in a restaurant, taken on a mobile phone with no flash) stunning. Great job Apple.

The end of the DSLR for most people has already arrived. I left my professional camera at home and took these shots at…

I find it interesting (to say the least) that a person who worked for Google would publicly praise a competitor’s phone. After all, the Google Pixel shows some pretty impressive results, as we could have seen through some test shots. However, what I find even more interesting is that Gundotra trashes Android OS, and even Google.

When one of the friends pointed out that Samsung S8 does a better job than the iPhone 7, this was the response:

Here is the problem: It’s Android. Android is an open source (mostly) operating system that has to be neutral to all parties. This sounds good until you get into the details. Ever wonder why a Samsung phone has a confused and bewildering array of photo options? Should I use the Samsung Camera? Or the Android Camera? Samsung gallery or Google Photos?

It’s because when Samsung innovates with the underlying hardware (like a better camera) they have to convince Google to allow that innovation to be surfaced to other applications via the appropriate API. That can take YEARS.

Also the greatest innovation isn’t even happening at the hardware level – it’s happening at the computational photography level. (Google was crushing this 5 years ago – they had had “auto awesome” that used AI techniques to automatically remove wrinkles, whiten teeth, add vignetting, etc… but recently Google has fallen back).

Apple doesn’t have all these constraints. They innovate in the underlying hardware, and just simply update the software with their latest innovations (like portrait mode) and ship it.

Bottom line: If you truly care about great photography, you own an iPhone. If you don’t mind being a few years behind, buy an Android.

I believe Gundotra’s comment is honest and based on his experience and personal opinion. However, it’s strange to see that he undermines the OS used by Google’s Pixel smartphone and that he even mentions Google’s fallback with the software. It sounds a bit like badmouthing your ex. I know Apple users love their gadgets, but former Google’s SVP is not the first person I’d expect to show his admiration for iPhone so transparently, even if it’s really better than Samsung or Pixel smartphones.

iPhone 8 will record 4K at 60fps on both cameras, report suggests

Should you really care if timelapse photography will destroy your shutter?

« This simple technique turns Content Aware Fill into a very powerful tool
Are you guilty of these top 10 Photoshop retouching fails? »