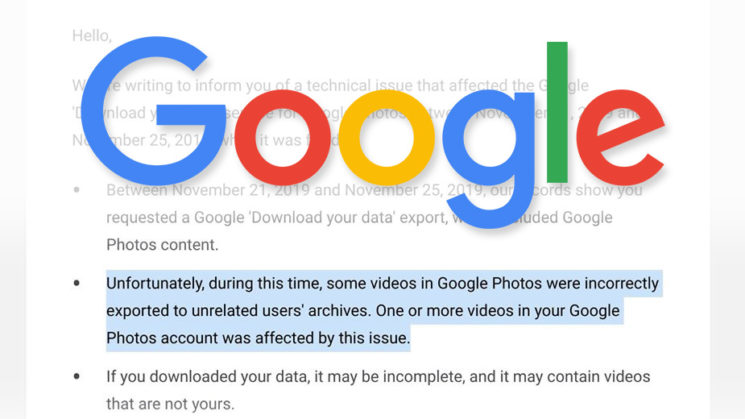 Always be careful what you put in “the cloud”, people. Google Photos is facing yet another controversy as Google reveals that a “technical issue” may have included your videos in somebody else’s export download archive. Google faced a similar issue last year with Vu Android TVs that were showing other peoples photos.

Google has started to warn users today, via email, that if somebody downloaded an export of their Google Photos content between November 21, 2019 and November 25, 2019, then that export might have included somebody else’s video content. Perhaps yours. They say that the issue was identified and resolved on November 25th, 2019. 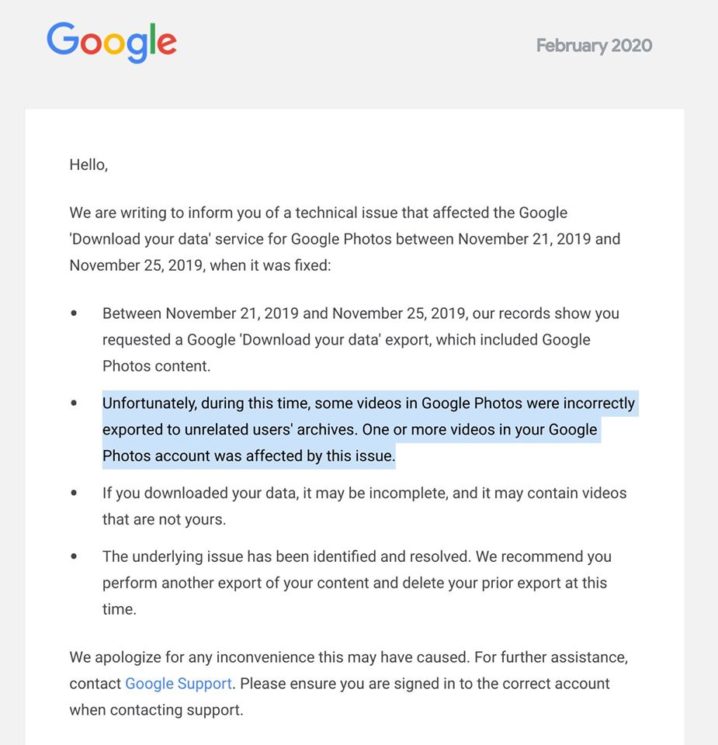 They also say that if you downloaded your own Google Photos data during this period, then the archive may be incomplete and also include random other peoples videos, too. Google has said that no other services were affected by the issue, and they claim that less than 0.1% of Google Photos users who used Google Takeout to export their content during the affected period were affected.

If you did export between Nov 21-25, 2019, then you’ll probably want to do an updated export, as Google suggests, if you haven’t done one already, just to make sure you get all of your data and only your own data. Of course, this won’t help any of your previous videos that might have already leaked to other people.

Google released a statement to 9to5Google.

We are notifying people about a bug that may have affected users who used Google Takeout to export their Google Photos content between November 21 and November 25. These users may have received either an incomplete archive, or videos—not photos—that were not theirs. We fixed the underlying issue and have conducted an in-depth analysis to help prevent this from ever happening again. We are very sorry this happened.

Google says that its “in-depth analysis” will help to prevent this from ever happening again, but this is the Internet, there are no guarantees. Be careful what you put online. You never know who might be looking, even if you think it’s private.

I’d be curious if there are any GDPR consequences over this for those affected in the UK and EU.

« Ariana Grande is being sued for posting a photo with no permission. Again. By the same photographer
More specs on the Godox AD1200Pro released by Pixapro »