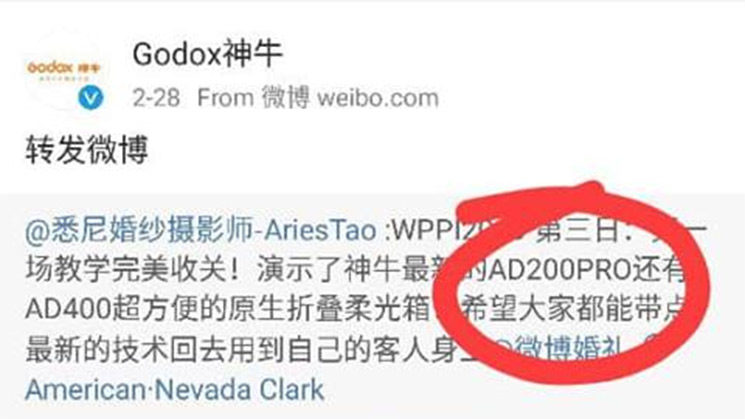 It’s been two years now since Godox released the original AD200 flash. With a swappable head system, it was pretty unique for its time. Since then, Godox has stepped up their game, releasing the AD600 Pro and AD400 Pro strobes with better colour accuracy and super fast recycle times. Now it looks like the AD200 is going to be getting the “Pro” treatment.

A screenshot of a post from Godox posted to Chinese social media site, Weibo clearly states the term “AD200Pro”. After a little digging, it appears to have been shot during WPPI2019, and is an image by Australian Godox ambassador Aries Tao. And multiple independent (very trusted) sources have confirmed to DIYP that a Godox AD200 Pro is on the way.

In the image above, the unit in the person’s hand on the left looks like the regular Godox AD200 we already know and love, but with the H200R round head attached. Is it, though? Could it be a new AD200 Pro? If it is, perhaps the form factor of the AD200Pro is identical to that of the AD200 to fit existing brackets, mounts and the existing AD-B2 dual head (that would be a nice thought, huh?). Or maybe it’s AD200 Pro hardware inside an AD200 shell for prototype testing.

Aries Tao lists on his profile that he’s a Godox Ambassador. So, it is entirely possible that he’s testing out an AD200 Pro prototype and just slipped up on the description mentioning a product that doesn’t officially exist yet. We’ve reached out to Aries to confirm. 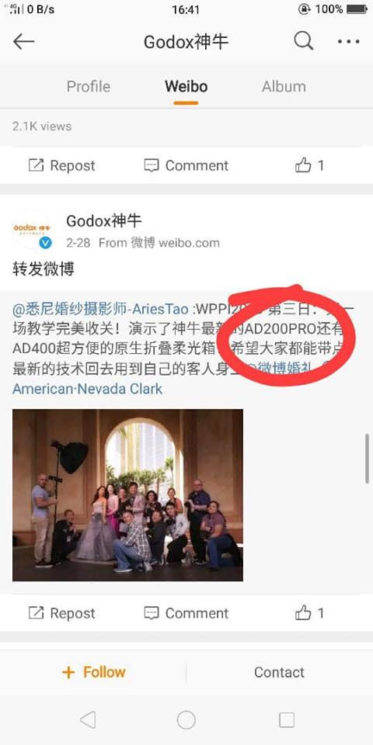 And then there’s that repost to Weibo from Godox themselves. Again, it’s entirely possible that the whoever’s running Godox social media on Weibo simply ran Aries’ description through Google Translate or something and didn’t even know the “AD200 Pro” wasn’t a thing yet. Or, perhaps they also know that an AD200 Pro is on the way, but didn’t realise nothing has been announced officially, and just ran with it.

Either way, whether it was simply a typo or this is a real Godox AD200 Pro (prototype or otherwise), the AD200 Pro is inevitable. As mentioned, we’ve had multiple sources confirm us that the AD200 Pro is on the way, and is expected to be announced soon, now that the V1 round head speedlight is official.

Although the Godox AD200 is a fantastic little unit, once you start to use them side-by-side with the AD400Pro and AD600Pro, you do begin to notice those issues with colour consistency and recycle times.

Faster recycle time? Better colour accuracy? 1/10th stop increments? What features would you like to see in an AD200 Pro?