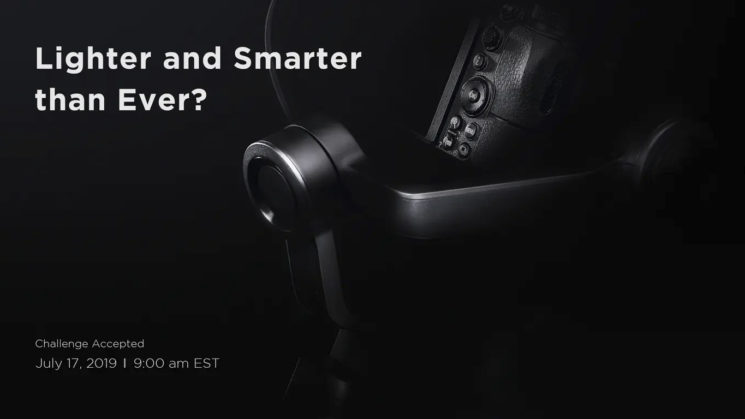 The DJI Ronin-S has been a very popular gimbal ever since it was first released. But one of the biggest complaints against it is its weight. After trying the Ronin-S side-by-side with my Zhiyun Crane 2, I can certainly sympathise with those complaints. But it looks like DJI might be getting ready to announce a newer, lighter gimbal for DSLRs and mirrorless cameras.

The teaser image at the top of this page was posted to the DJI website with a link to sign up for notifications. It obviously shows a gimbal with a DSLR mounted on it and the claim “Lighter and Smarter than Ever?”. A short teaser video was also posted by DJI to Twitter.

The video suggests that the new gimbal would follow the design of the Ronin-S. At 10 seconds, the video isn’t very long, but it flashes through a number what looks like design blueprints, giving some clues as to its construction. Only, it’ll be smaller and lighter, assuming the answer to the question in the image at the top of the page is “Yes!”.

With the popularity of the Zhiyun Weebill LAB gimbal, DJI certainly needs to do something to capture that segment of the small DSLR/Mirrorless gimbal market, so perhaps this could be it.

An announcement is expected on July 17th at 9am EST, so we’ll keep you posted as we find out more.

What features do you want to see in a new, smaller DJI gimbal?