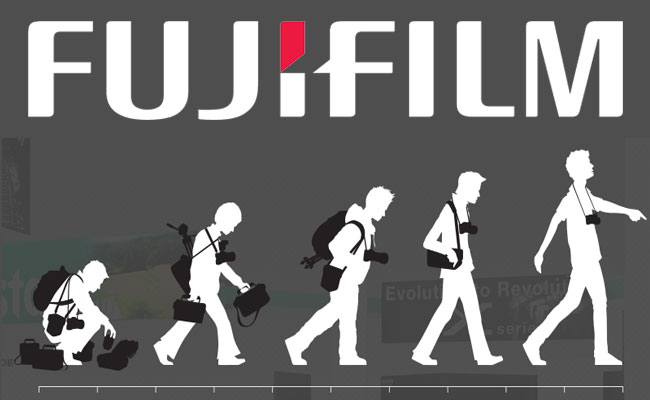 There was a graphic released by Fuji this past weekend that many of you may have seen by now. It’s a clever little play on the famous “March of Progress” painting we all probably have pop into our heads when we think of evolution; this time, however, the painting depicts an evolution from using SLR cameras to going mirrorless.

Without trying to sound like I can’t take a joke (because that’s what this graphic ultimately is), I wanted to add my own comment on this image. I’ve said before, myself, that mirrorless is likely going to become the next standard for the world of photography; my Chrome browser’s spell check isn’t recognizing the word “mirrorless” right now, but it soon will be. That being said, I think Fuji’s latest advertisement is completely missing any point it’s trying to make.

Unless what they’re getting at is that you won’t need a tripod, flash, or extra lenses when you buy one of their mirrorless cameras, Fuji’s teaser for Photokina came off about as cringeworthy as the commercials I’ve been seeing for the Amazon Fire Phone.

Here’s the thing about mirrorless cameras: they’re incredibly portable. They literally take the heart out of an SLR, replace it with a foundation nearly as efficient at doing its job, and take that aspect and name themselves after it. You don’t need to handle it as carefully as you’d need to handle an SLR; you can probably carry it in a cheaper bag if you’d wanted, and your camera would be just as safe. But in terms of practical use, that’s pretty much where the major differences end.

I used to carry around my Canon 5D Mark II with me everywhere; I’d edit the pictures I took on my laptop every night and I’d upload them into an album on Facebook afterwards. For a few good years, now, my primary shooter has been a smartphone. You can say that before, I used to look like the guy second to the left in the image, and that now I look like the one furthest to the right. Yeah, it’s definitely a lot more comfortable being there. But do I have a better camera?

I use my smartphone because it’s easier for me to edit on VSCO and Afterlight; I’m using my smartphone because it’s easier to take out if something awesome spontaneously happens to take place around me and I’m compromised in the time I have to capture it. I’m not carrying my Mark II around anymore because things are just getting busier for me, as they get for any of us. And by using a smartphone, I settle for an even trade: loss of the amazing quality I get from a Mark II for an easier way to take the pictures I want to take. When I’m using a more portable camera, I’m not evolving by doing so; I’m sacrificing quality and versatility for ease of use.

If there is a point that this ad gives out at all, it’s that you don’t need to burden yourself with so much to be a good photographer. You simply need what you need. Being prepared for everything isn’t a necessity, and it slows you down. But that’s not what Fuji’s trying to say; they’re trying to generate hype for their mirrorless line, and they’re giving a complete illusion of what owning one of those cameras would be like.

But advertising works. I’m writing this post and generating more attention for Fuji by even writing this. And that’s fine; personally, I think they’re awesome. I’ve been resisting the urge to buy an X-T1 for quite a while now. But the reason I brought up this image was because it’s just one example of how poor camera companies can be at advertising their gear. The industry’s been in trouble since the introduction of smartphones for a while now, and mirrorless seems to be the solution. But marketing your products makes a significant difference, and it has to be done better than this if it expects to get anywhere.

I still love you, Fuji.

« The Zeiss Otus 85/1.4 – A Lens Made For Portraits With Strong Wallet-Impact
The Pinhole F Is A Pinhole Camera Based On The Legendary Diana F »