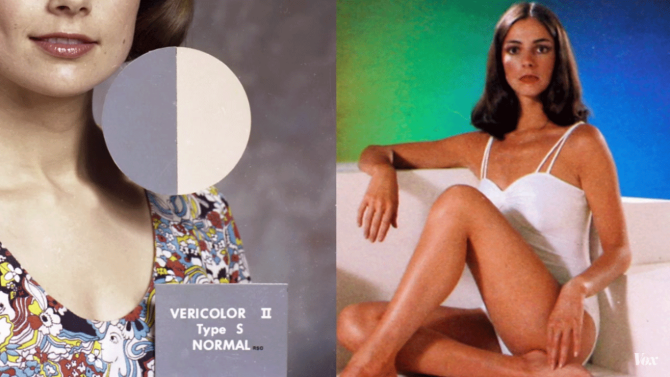 In the quick video clip below, professor Lorna Roth (of Concordia University in Montreal), covers the who, what, why, where, and when film and camera technology began making strides in an effort to more accurately capture and portray the wide variety of skin tones that make up the human race.

In the early days of color film, the color balance of the film’s processing chemicals were made with the primary consumer market in mind–which, at the time, was predominately light skinned individuals. “For many decades, chemicals that would bring out various reddish, yellow, and brown tones were largely left out,” explains the video’s narrator.

Interestingly, what spurred a change in the industry was not a skin tone bias, but the fact the film would also inaccurately portray different types of wood grain. That’s right, wood grain–as in the grain of wooden furniture. In the 1970’s, “…companies that were marketing different kinds of wood furniture were complaining that Kodak film did not render the difference between dark grained wood and light grained wood.”

Roth has studied the topic in depth, even writing a 26-page research paper in the Canadian Journal of Communication back in 2009. In the paper, Roth shares a plethora of her findings along with some rather interesting statements she collected from the various people she interviewed during her study, including this one from Earl Kage, a former manager for Kodak Research Studios, who says it wasn’t just wood grain that people were complaining about.

“This was also about the same time that we got some interesting observations from chocolate manufacturers who, in displaying Whitman’s chocolate or whatever the names were in any case, the subtle variations between the dark and bittersweet and milk chocolates weren’t as discernible and so some modifications were tried and consequently my little department became quite fat with chocolate, because what was in the front of the camera was consumed at the end of the shoot.”

If you have some free time, you can read her research in it’s entirety, here.

[ via Vox | Canadian Journal of Communication ]

Sony a9 vs, Canon 5D Mark 1V: Looks like Sony is improving on skin tones