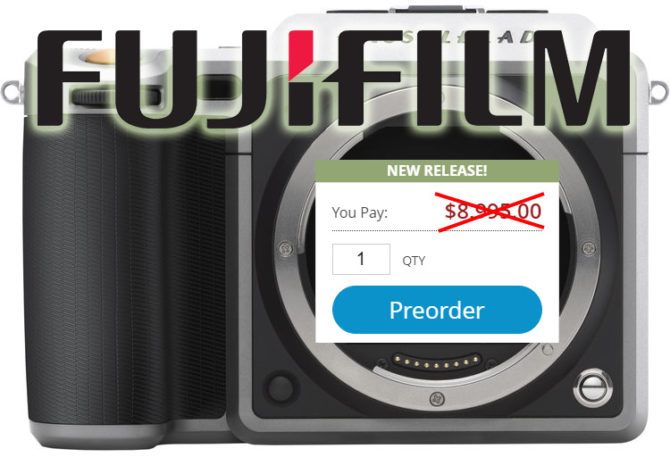 Information about Fuji’s possible entry into the mirrorless medium format world is mostly just speculation, but it seems it’s becoming a matter of “when” rather than “if” Fuji will announce something.

Fuji Rumors are reporting that a “trusted source” has told them it will be “definitely more affordable” than Hasselblad’s new X1D.

There’s been talk about Fuji releasing a medium format mirrorless camera for a little while now and the current thinking is that a new camera would contain the 50MP Sony medium format sensor. Given the recent X1D announcement, and with DSLRs like the Canon 1DX Mk II, I would say it’s probably a good bet that one’s true if it expects to compete.

We know that Sony produce a 50MP medium format sensor, and rumours of a Sony powered Fuji have been brought up before.  Let’s hope they finally come to fruition.

If the rumour mill is to be believed, a new Fuji mirrorless medium format camera could be announced at Photokina in September, along with three new lenses.  If that happens, we’ll be there, so you can bet we will be getting hands on for a sneak look for those that couldn’t make it.

Price has obviously not been announced, but if the source is accurate and it will be “definitely more affordable” than the X1D, then we can expect it to cost less than $8995.  It will be interesting to see if a mirrorless medium format at a lower price point will have any impact on the cost of higher end DSLRs as some choose to jump ship.

It’s nice to see a new market in the camera world starting to emerge.  We’ve not had one for a while.  Mirrorless has never really appealed to me much in the past, but in combination with a larger sensor, at a similar price to a high end DSLR… Yeah, I could see that swaying me.

How about you? Are you looking forward to the new mirrorless medium format race? Do you think Fuji will announce something soon? Will Nikon and Canon follow suit? Will they have to in order to survive in the future marketplace? Let us know your thoughts in the comments.