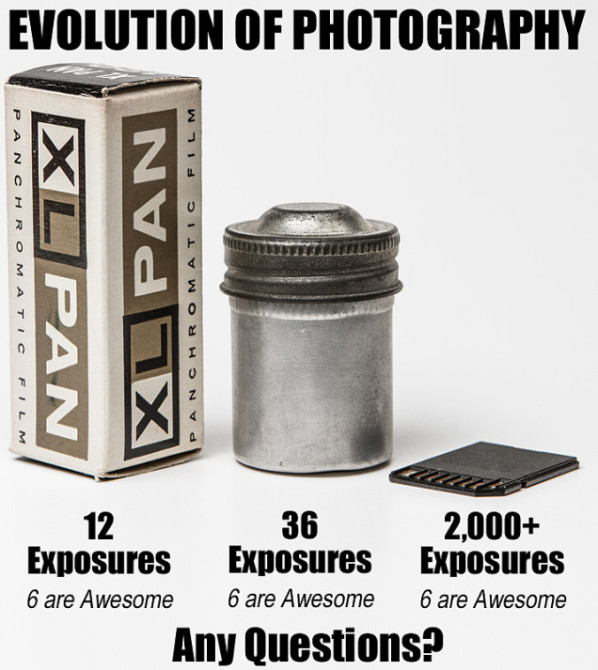 Ask someone who worked as a professional photographer what he dislikes most about photography today, and there’s a pretty good chance he’ll say something about how many people take photos today almost as an afterthought.

You’d never hear someone saying “I’ll just fix that later in Photoshop” (though photographers were ‘shopping even before Photoshop), and each click was respected; it was intended to become a keeper.

Being limited by the number of exposures on each roll of film you could literally put a price tag of each press of the shutter, but today, with 512GB memory cards and virtually free and unlimited exposures, this is far from being the case.

Photographer Mason Resnick pretty much summed it up in the above image.

“In my ongoing office cleaning efforts this week I found a roll of 120 film in its original, never-opened box, from the 1950s, and a metal film canister that once held a roll of 35mm film. While I was looking at them and marveling about how old they were, an SD card caught my eye”, Mason wrote.

So he decided to have fun with his antique findings and created the image above, hoping it would go viral, but maybe also sending a gentle message to the young, trigger-happy photographers out there.

For those who missed it, we recently shared a humorous infographic comparing analog and digital photography, and how the latter changed the way we take photos.

Creating a new breed of super hero, one sad and lonely photo at a time