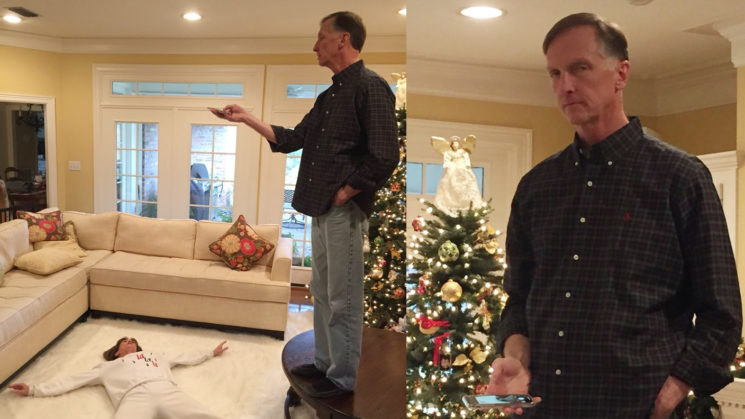 We all want to do something a little crazy for our social media at some point. Or, we at least contemplate it, even if we don’t follow through. Sometimes we’re just to afraid of how it may be perceived, and sometimes it’s just because we need a little help. In this case, it’s the latter, when fitness Instagrammer Libby Burkhalter wanted to create an indoor snow angel for her 29 followers.

Well, what else is one supposed to do when they want to make a snow angel, but either there’s no snow or it’s just far too cold outside? Naturally, she enlisted the help of her husband, who reluctantly agreed to participate in the activity. I think the look on his face just about says it all.

The Instagram video went viral in its own right, but even more so once the couple’s son posted this to Twitter on Christmas Eve while witnessing the event.

I’ve learned more about love from watching my dad reluctantly rearrange the living room so my mom can make snow angel boomerangs for her 29 Instagram followers than anything else in life pic.twitter.com/nMHdWtY0dE

And as for Libby’s follower count? Well, since posting, that went from 29 to 15.7K. Libby is a trainer who runs her own business, Libbfit, so this will no doubt give that a nice little boost in the new year.

Whatever you celebrate, we hope you had a great one and will have a fantastic new year!

Quick Tip: Photographing a Reluctant Subject? Shoot From The Hip (Or From The Ear)

« Open source Lightroom alternative Darktable is now available for Windows
Taking too many selfies? You may be suffering from selfitis, an official mental disorder »