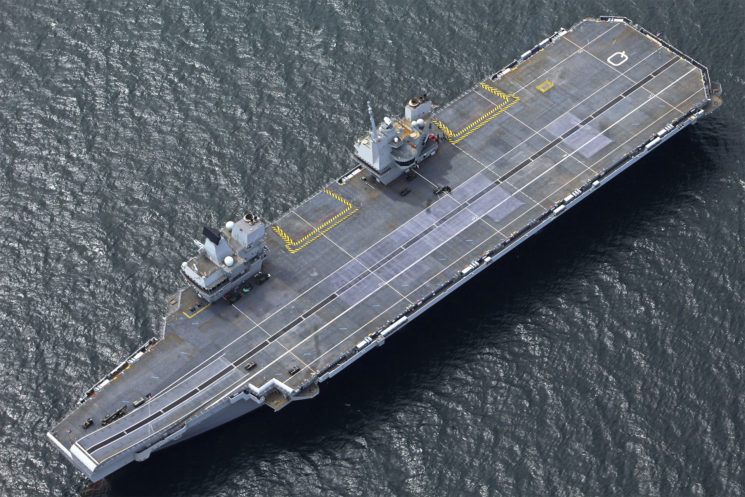 I don’t know whether to laugh or cry at this one. The HMS Queen Elizabeth (Ro8) is the Royal Navy’s largest warship. It’s brand new. It cost £3 billion ($3.9 billion) to build. It was only officially named last month, and it’s not even been formally commissioned yet.

The HMS Queen Elizabeth began sea trials on June 26th. During a recent visit to Scotland as part of this tour, a gentleman who is not being named managed to land his drone on it. And he did it completely unnoticed.

The unnamed pilot told The Telegraph…

I was amazed that I was able to land on the aircraft carrier for two reasons, the first being that there was no one about to prevent it from landing although were security police around in small boats who were waving at the drone.

The second reason was more technical. I received a high wind warning as I was videoing up and down the flight deck and my control system advised me to land.

Yeah, I’m pretty amazed, too. I mean, I know it’s not actually out doing its day job yet. And, yes, there’s a website that lets you track her every move. But, still… no security whatsoever? No systems up and running to detect this kind of thing on the ship?

He was not only amazed, but concerned. When he attempted to raise the security issue with local port security, they didn’t seem too bothered. They forwarded him to some heavily armed police he believes were from the Ministry of Defence. He was told that the ship’s crew were all “at dinner ashore”. The officer he spoke to said he would pass it up the chain of command.

It appears he did post images from the flight deck online and was met with some rather harsh criticism. The pilot says that the only law he felt he may be breaking would be flying over the vessel without permission. But other charges may come from the Navy in the future. The images no longer appear to be available.

This was just a harmless drone pilot trying to get some video, and was forced to land due to DJI’s software telling him to. But given some of the things that have been happening with drones recently, it’s pretty scary he was able to land right on the deck with no challenge.

Well, at least he may have the honour of being the first to land a craft on the new ship. Hopefully security will be stepped up a little once she’s in full service.

Have you ever noticed the Purkinje Shift?

These are the winning photos from the 2018 Nikon Small World competition, prepare to be amazed

« Macphun launches Aurora HDR 2018, finally coming to Windows
21 UV & protection filters are put to the test and the results are rather surprising »