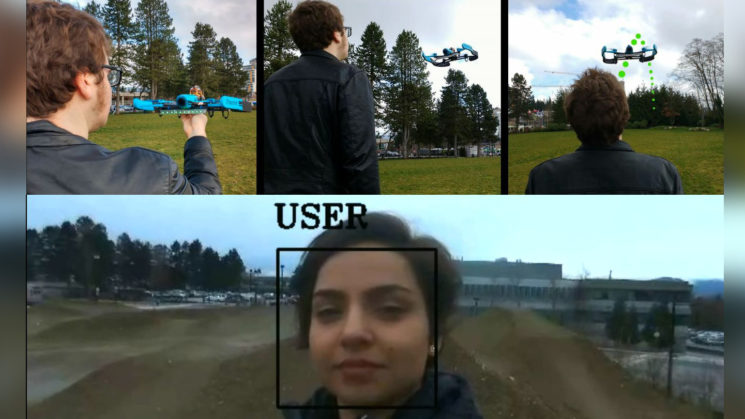 There are several ways to control your drone. DJI lets you do it with hand gestures and by turning your head. But robotics scientists at British Columbia’s Simon Fraser University suggest an alternative method. They are exploring the possibility of controlling the drone with a series of facial expressions. They demonstrate the technology in a paper and two videos, and it looks like a pretty interesting idea.

The project is titled Ready-Aim-Fly, and the name describes the phases of controlling the drone. As you can see in the video, the drone first needs to detect the user’s “neutral expression” so it can learn their face. After that, it learns the “trigger” face which will give it a command. Then, the drone starts to fly while keeping the user in the center. As Digital Trends explains, at this stage the user can choose the desired trajectory and move away from the drone to increase its flying distance. It’s described as “pulling the string back on a catapult.” The final stage is flight, and the drone flies as the user programmed it.

The user can pull off all sorts of facial expressions to program different trajectories to the drone. Richard Vaughan, one of the researchers on the project, told Digital Trends that they are “serious about this interface.” The demo is “cute and small scale,” but they plan to develop it further. It would allow the user to have their hands free while controlling the drone, yet it might be possible to program various trajectories. Vaughan explains that the technology uses the same techniques as the iPhone X animated emojis.

The researchers used a modified Parrot BeBop drone for the test. According to the paper, the software is able to handle even poor image quality, when the drone is several meters away from the person’s face. Also, they demonstrated different facial expressions they used to control the drone. Judging from the paper, you can make the drone fly with some really funny faces.

Since the drone needs to be able to “see” the user’s face, I don’t know how usable this technology would really be. Although, I like the idea of controlling the drone with funny faces, and I’m curious to see how it can be developed further.