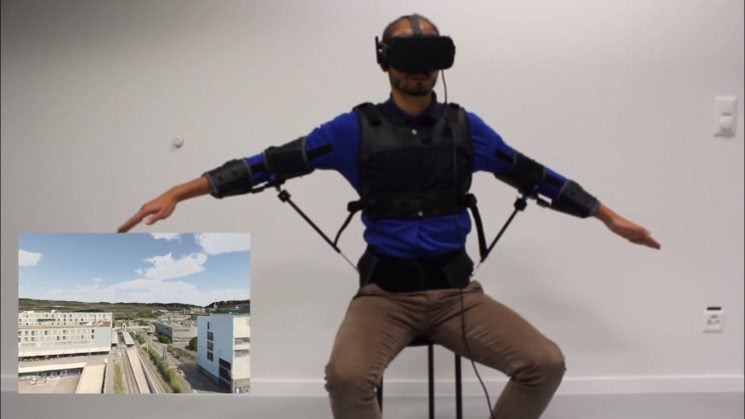 There are a few ways of controlling a drone, including head movements, hand gestures, even facial expressions. But have you ever thought of flying a drone while you pretend to be flying on the ground? There is now a suit that enables it, developed by École Polytechnique Fédérale de Lausanne (EPFL),  a university in Switzerland. Now you can spread your wings… I mean, arms, and fly like an eagle!

EPFL scientists have developed a soft exoskeleton for the upper body, which they have named FlyJacket. It lets you control a drone by pitching or rolling your body. In the video above, you can see a demonstration with a simulated flight, but also how flying a real drone would look. Paired with a smart glove, you can also include hand gestures to have the drone take off or set a point of interest.

The suit has a built-in motion-tracking device in order to monitor body movements. It is also paired with goggles so that users can enjoy the first-person-view from the drone perspective. Since you can “fly” with your arms spread like wings, there’s also an arm support so you don’t feel uncomfortable.

One of the EPFL team members, Carine Rognon, spoke to IEEE about FlyJacket. She explained that this exoskeleton was designed to make drone flying more natural and intuitive. Her research group had previously studied which movement would feel the most intuitive for flying a drone. As it turned out, the position with the arms slightly spread was the most natural for most people.

Carine Rognon and her team believe that there is a good commercial potential for FlyJacket. It’s designed to be affordable, small enough to fit into a backpack, and adaptable to many body types. The researchers are working on adding more commands to the drone and the suit. Currently, it’s only possible to use the upper part of the body and the system only works with fixed-wing drones. So the team is researching the possibilities of flying a quadcopter while still keeping the system simple and intuitive.

FlyJacket reminded me of childhood when the boys would spread their arms and run like crazy, pretending to fly an airplane. I guess it really is the most intuitive (and also logical) way for us to imitate flying. Well, it’s nice to see that “flying” like this might actually become possible, at least up to a point. : ) Although it looks a bit funny, I’m curious to see whether this kind of system will become available in future.

[FlyJacket: An Upper Body Soft Exoskeleton for Immersive Drone Control via The Verge]