The affordable mini-drone DJI Spark is here. The comments and reactions about it are different, and the first hands-on reviews are already out. In this article, we bring you reviews from Kai Wong and iPhonedo. They’ll show you what this tiny drone is capable of, and you’ll see what its features look like in action.

DJI Spark has caused different reactions among the users. Some love it, some hate it, and most of us compare it with the Mavic. Sure, the baby version of Mavic isn’t that powerful, but for half its price it still offers a lot of features. But anyway, let’s get to some features shown in the reviews and get more in depth on the drone performance.

This drone is so small that it fits in a jacket pocket, even though the wings aren’t foldable. It’s made of plastic, but it seems like pretty tough plastic. It’s lightweight, but as you can see from the iPhonedo’s review, it still performs pretty well in the wind.

As for the imaging, DJI spark features a 25mm f/2.6 lens, and 12 MP 1.2/3″ CMOS sensor. As we mentioned earlier, it shoots “only” Full HD. According to Kai’s review, it’s still good 1080p footage, even when the light gets lower. Still, those of you who find 4K particularly important may not be satisfied with this drone. I guess it’s a matter of perception and priorities. When it comes to stills, you can take 12MP photos with Spark. It has a “shallow focus” feature which lets you create fake DoF for stills.

DJI Spark provides you with up to 16 minutes flight time and up to 15 minutes hover time. Compared with Mavic, it’s fairly less. The control range of Spark is also smaller: it’s 1.2 miles compared to Mavic’s 4.3 miles. Finally, it’s a bit slower than the Mavic, featuring the maximum speed of 31 mph (50 km/h) in Sport Mode without the wind.

When it comes to stabilization, DJI spark has 2-axis motorized stabilization. It’s one axis less than Mavic, but still – it provides mechanical stabilization and produces smooth videos. 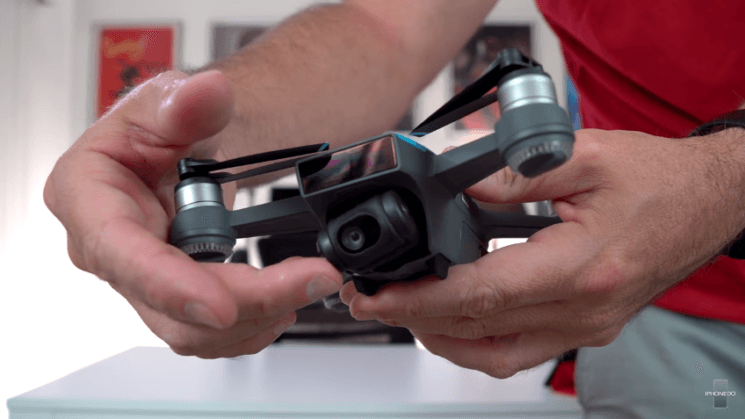 DJI Spark features sensors all over, and it allows you different ways of controlling. You can control it with your smartphone, and the controller which will be released soon. It’s also compatible with DJI goggles, and finally – you can control it with your palm. You can make gestures with your hand to make the drone take off, land, circle and take photos. In iPhonedo’s review, this even worked with the hand off a toy, which I find really amusing. This hand-control may look a bit like you’re doing tai-chi, but I wouldn’t mind that. I like to think of using the Force instead.

Both iPhonedo and Kai advise using propeller guards when you control the drone with the palm. Even if you’re an experienced drone operator, it’s good to protect yourself – you never know.

The impression about the drone shared between iPhonedo and Kai is that DJI Spark is aimed at the broader audience. It’s easy to use for beginners, and it makes a perfect first drone. I also believe this drone is especially aimed at beginners and gaining new users. And personally, I fall within this group of potential drone owners. Kai and iPhonedo seem pretty charmed with this toy-like aircraft, and I must say, as a newbie, I would like to have it.

What do you think? Have the reviews changed your opinion? Do you think Spark is worth its price? And would you consider buying it? Share your thoughts in the comments.