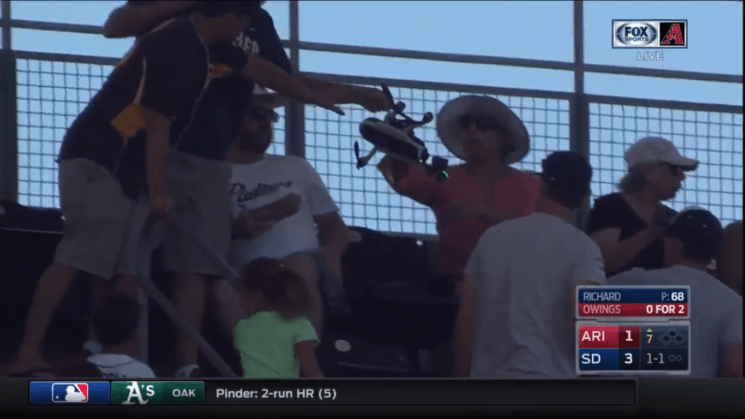 This Sunday, a drone crash landed in the audience during a Major League baseball game. Arizona Diamondbacks and San Diego Padres played a game at Petco, when someone decided to fly a drone above the stadium. The aircraft hovered above the venue, and eventually ended up in the audience. It smashed against an empty seat, nearly hurting one of the spectators.

I’m surprised by the lucky coincidence of the drone crashing into the empty seat between two people. However, the debris from the propellers flew at the man on the left. Fortunately, he wasn’t hurt, but this doesn’t make the drone pilot anything less guilty.

First of all, FAA forbids flying drones around stadiums. Here is an excerpt from their website about operating drones during sporting events:

Flying UAS in and around stadiums is prohibited starting one hour before and ending one hour after the scheduled time of any of the following events:

Specifically, UAS operations are prohibited within a radius of three nautical miles of the stadium or venue.

So, not only you shouldn’t fly a drone during sporting events, it’s prohibited an hour before and after them. And it doesn’t only cover the airspace directly above the stadium, but also some space around it. Anyone who wants to fly a drone should be aware of the regulations. It could minimize the risk of hurting someone, and consequently, reduce the risk of getting fined.

But even if this prohibition wasn’t explicitly stated in the FAA’s regulations, there’s always common sense. It’s not hard to conclude that it’s unsafe to fly a drone above the full stadium. You can hear the reporter in the video saying that Russians must have something to do with that, but of course, it was a joke. It was probably just a drone owner who doesn’t know the rules, or he just chose not to follow them. But if he’d at least followed the recently canceled rule of registering with FAA, I believe it shouldn’t be a problem for the authorities to find him. And hopefully, his next drone will be a DJI, so he’ll have to register if he wants to fly further than 50 meters.