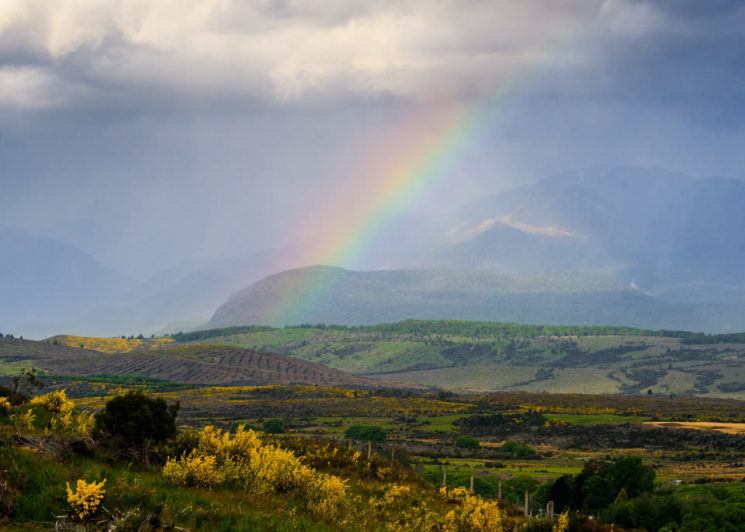 Normally, if you’re using a tripod, camera shake isn’t something you’ll have to worry very much about. However, there are some obvious exceptions. If you’ve ever found yourself taking pictures in heavy winds, you’ll know the difficulties of capturing sharp photos — particularly if you’re using a telephoto lens. This seems like an impossible situation; what do you do when a tripod isn’t enough to stop your camera from shaking? Luckily, there are ways to improve sharpness even in windy conditions and come away with photos that are completely usable. I’ll cover some of the most important here.

1) Don’t Use Your Center Column

This one should be a given, but one of the most preventable mistakes I see photographers make in windy conditions is to continue using the center column on their tripod.

Even in normal conditions, you need to exercise caution with a center column, particularly on cheaper tripods. As we mentioned in our article on using a tripod, they add a single point of weakness to your setup and are very susceptible to vibrations from the surrounding environment.

It’s not like they are never useful — particularly if you need your tripod to reach a certain height — but they’ll harm your sharpness significantly if you’re shooting in the wind. Whenever possible, lower your center column.

Assuming that your composition allows it, you’ll see incredible improvements simply by lowering your tripod a foot or two. Even in mild breezes, using a heavy-duty carbon fiber tripod, I’ll often find suboptimal sharpness when I’m using a focal length of 150mm or more at my tripod’s full height.

Just collapsing a single section of each leg can, from what I’ve seen, reduce the intensity of the blur almost in half. In the wind, this is one of the best ways to restore optimal sharpness to your setup.

Another important note: When you collapse one of your tripod sections, it should be the thinnest one. Thin tripod sections are much more prone to vibrations, and there’s no reason to leave them open last.

The only case where this doesn’t apply is if you’re taking pictures in sand or the ocean, and you don’t want grit or salt to mess up the joints of your tripod. In that case, it’s fine to leave the lowest, thinnest section of your tripod extended, since it can raise the upper joints above the water or sand damage — though, even that is at the expense of some possible sharpness.

Although the common wisdom says to avoid using vibration reduction with a tripod, this is one situation where that advice absolutely doesn’t apply.

Vibration reduction (also known as optical stabilization or vibration compensation) does a surprisingly good job of reducing blurry photos in the wind. Take a look at the comparison below, which is a crop from a photo taken at 200mm in a strong breeze, both taken at 1/4 second: 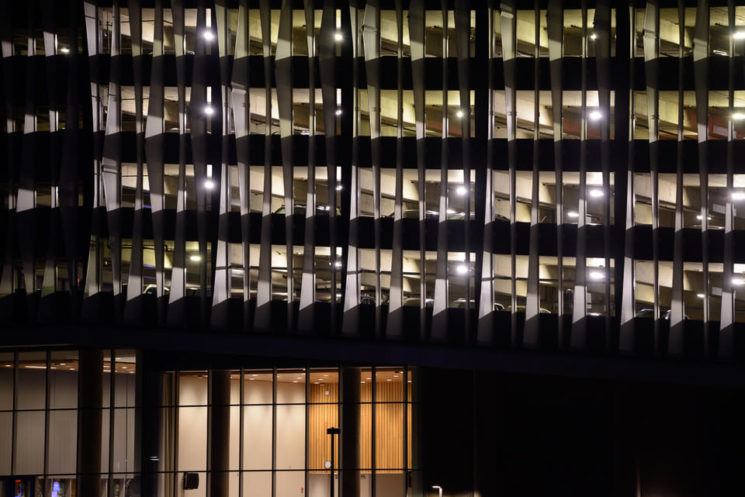 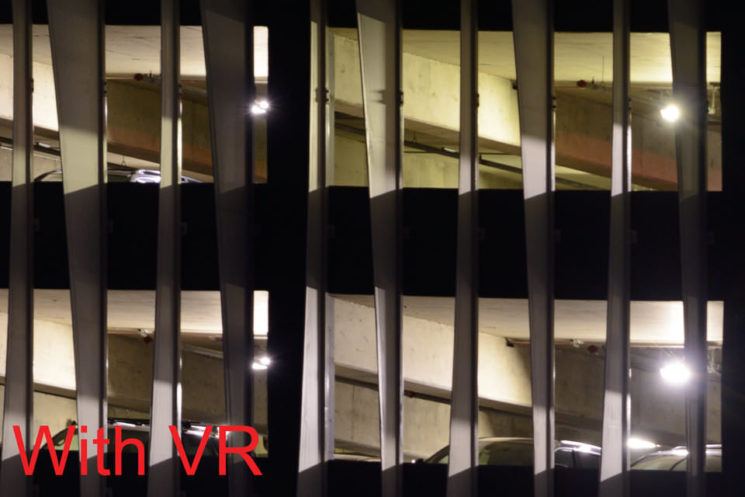 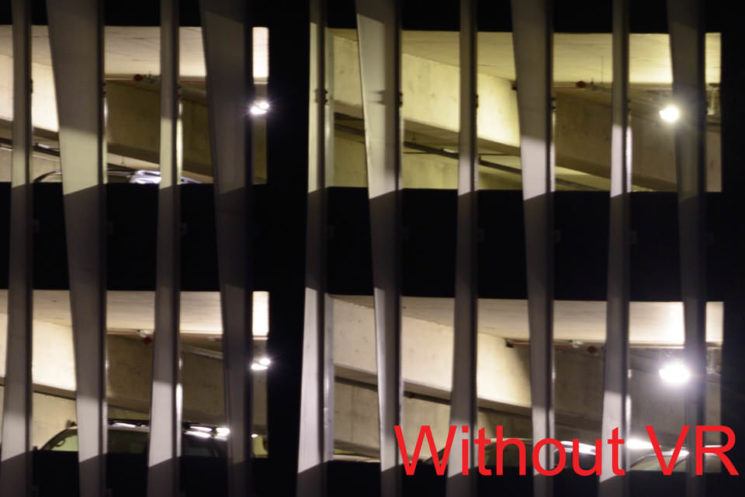 The differences in these unsharpened photos are pretty clearly in favor of the VR, and this isn’t a particularly extreme crop.

As for the accuracy of this comparison, when I took these photos, the wind was shifting enough that there were already some sharpness differences from photo to photo (leaving my settings unchanged). So, I did my best to capture both of these photos when the wind was similarly strong, and I also took a series of photos to confirm that these effects were present in more than just a single comparison — which, inarguably, they were.

When it’s windy, and you’re using a tripod, turn on vibration reduction. Even if you don’t think that the wind is robbing sharpness from your photos, it’s worth the effort.

4) Don’t Hang A Bag from Your Tripod

One of the stranger suggestions I’ve heard from photographers is to hang a bag from your tripod when it’s windy. Some tripod manufacturers even include a hook at the top to make this easier.

While working on this article, I also tested the idea of “strapping” your backpack to the tripod, rather than hanging it, in an attempt to make your tripod weigh more without adding a component that could swing. This method is better, but I really didn’t see any differences between a photo taken that way and without any backpack at all. That’s because the shaking that causes blur tends to be low-level, high-frequency vibration, which is not something that is easy to steady with your bag.

Again, though, if it’s so windy that your tripod is at risk of blowing over, this may be a viable method — luckily, I’ve never shot in conditions that were quite that extreme, and I don’t think most people do, either.

As a whole, except in the most insane situations, just leave your tripod as it is. Adding a backpack may seem like it would help, but it almost always does more harm than good.

5) Don’t Grab the Tripod to Steady It

Along the same lines, don’t grab your tripod in the hopes of steadying its vibrations. You’ll just add larger, courser shakes that blur your photos even more.

Luckily, I don’t see many photographers attempt to do this, but it’s still something that happens occasionally. Unless you’re taking pictures in the ocean or in a river, and you’re worried that your tripod will roll over, there’s no reason to hold onto it while taking a picture (and even then, it’s generally better to hold your hand a couple inches away from the tripod in case it falls, but not actually touch it during the exposure).

Tripods, especially high-end versions, are well-machined tools with the sole goal of being as stable as possible. We photographers, in contrast, can’t hold our own hands perfectly still in front of us for even a second. Tripods win.

I don’t like watching people machine-gun a scene while taking pictures, since I see landscape photography as a much slower, more deliberate process. However, if you’re taking pictures under very windy conditions, it’s a good tool to have at your disposal.

For every single frame you’d normally take, capture five or six instead. If you’re creating a panorama or HDR, take several shots at once before changing your composition or camera settings. This is one of the few cases where “Continuous High” mode can be useful for landscape photography.

That’s because wind, as far as we’re concerned, is random. There is no way to predict when your photo will be sharp or blurry in a breeze, and your best shot at minimizing the damage is to capture as many samples as possible. No, this doesn’t guarantee that you’ll get a sharp result, but it’s a good way to maximize your odds.

7) Use a Faster Shutter Speed

Although it’s frustrating to raise your ISO for landscape photography, it can be necessary if you’re still getting blurry photos after doing all the steps above. Your last resort is to use a quicker shutter speed, which likely will require a higher ISO than you’d normally want.

Still, it can be worth it. It’s much better to have a sharp photo at ISO 400 and 1/20 second than a blurry photo at ISO 100 and 1/5 second. Blur from camera shake is much worse than the extra graininess of a high ISO; it’s definitely worth the tradeoff.

Ideally, you won’t have to make such a compromise, but it’s important to know that you still have this option for particularly intense winds.

It’s never possible to guarantee perfect photos in windy conditions, but there are certainly some things you can do to improve your chances.

First, lower your tripod’s center column and collapse it to be as low as possible. If your composition requires your camera to be a certain height, collapse the thinnest leg sections first to minimize vibrations.

Then, if your lens or camera allows it, turn on vibration reduction. Although VR isn’t usually necessary for tripod-based photography, this is one situation where it makes a clear difference.

Also, unless you’re worried about your tripod blowing away, don’t hang anything from the center hook or hold the tripod with your hands while taking a photo. Most of the time, you’ll add vibrations, or, at best, not affect the photo in any meaningful way.

Finally, to maximize your chances of getting a sharp photo, take several images per composition and pick the sharpest one later. This mindset is anathema to most landscape photography, but, under particularly windy conditions, it may be your best option. And, if all else fails, you can always raise your ISO and use a faster shutter speed.

These tips won’t save you in every case, but they’ll make your life easier if you run into particularly windy conditions. Plus, since bad weather often works well for photography, it’s likely that this information will be most useful when you’re capturing an especially beautiful landscape — so, it’s important to commit to memory. By optimizing your camera setup, you’ll be able to maximize your ability to take usable photos under even the most extreme of situations, including windy conditions.

Spencer Cox is a landscape and travel photographer from Franklin, Tennessee. To contact Spencer directly or view more of his work, visit his website at Spencer Cox Photography. Or, follow him on Facebook. This article was also published here and shared with permission.

10 tips to help you get sharp photos when shooting handheld