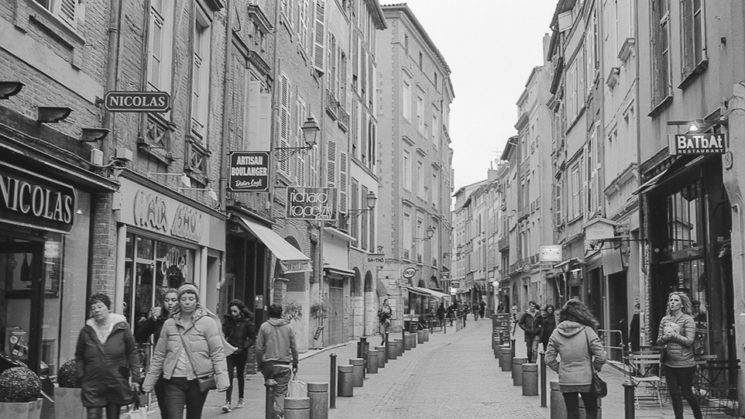 If you want sharp black and white images with fine grain, then you are on the right page my friend!

I’m a bit of a freak in terms of image quality and I love very detailed photos. That’s why I’ve been searching for a good combination of film and developer to obtain the best results. The technique I’m about to share is not for every situation and ideally, you will need either a decent amount of light or a tripod.

The reason behind is that we need to reduce the size of grain and the first step is to use a slow film. Usually, fine grain films go from ISO 25 to ISO 100. A small grain will automatically result in an increased sharpness as it makes the definition thinner on the negative. It’s the same with digital cameras, the smaller are the sensor’s pixels, the higher is the definition.

For today’s article, we are going to use a roll of Fujifilm Neopan 100 Acros. I often hear good things about it and wanted to give it a try since a long time. If you are into digital as well, you may have heard the name Acros in the past months. Fujifilm has added a new film simulation in their high-end cameras (X-T2 – X-Pro2) that replicates the look of this film.

Back to the film version, it’s considered a medium speed film and can be used in both outdoor and indoors. It’s also known to be very capable for long exposure thanks to its admirable reciprocity capabilities. For those of you who have never of reciprocity, it’s basically how a film reacts when being exposed to the light. In other words, it means that different films won’t handled exposition – especially long exposure – the same way.

In this case, the film has very good reciprocity characteristics, which makes the idea partner for Astro or night photography. On the other hand, a film with poor reciprocity would not support long exposure very well and tend to develop some sort of halo effect around the highlights which is known as “Reciprocity Failure”. If you are interested to read more about this topic, check the definition on Wikipedia.

The second key element for crisp images is the developer. All developers are not equal in terms of grain quality and in this case, Rodinal (aka R09) is known to give fine grain with slow films (this is different with medium speed films). It’s also notorious for being a high acutance developer. This means it increases the grain which results in an increased edge sharpness.

To make grains smoother, some developer use a silver solvent. This makes the edges between grains softer which has for results to decrease the perceived sharpness. Rodinal doesn’t contain such a solvent, that’s why it may increase the grain appearance on some films but as we are using a fine grain film, there is no such problem.

The last element that will help to achieve this fine details images is a decent glass. In this case, I’ve used a 45mm on my Hasselblad Xpan but I’m sure you can get similar quality with cheaper lenses. For this series, most of the images were shot between f/4 and f/5.6 at 1/60 of a second and exposed for the mid-tones most of the time. I’m sure I would have got a bit more details by closing down to f/8 but there was not enough light on this day and was shooting handheld.

About the development, I went for a standard development as it was the first time for me using Rodinal. If you want to reproduce the same steps here are the details:

Overall, I’m pretty happy with the results. It gives to these images a timeless feel and classic B&W look. I will certainly order more of this film and experiment with other developer and stand development as well to see how it performs.

I hope this will help you to get sharper images and if you have found this article interesting, share it with someone that could benefit from these tips.

500 shades of gray: tips for shooting black and white film

10 tips to help you get sharp photos when shooting handheld
« Watch: the lightning strikes at the tempo of music in this spectacular thunderstorm timelapse
How to Color grade using Luminosity-Masks »