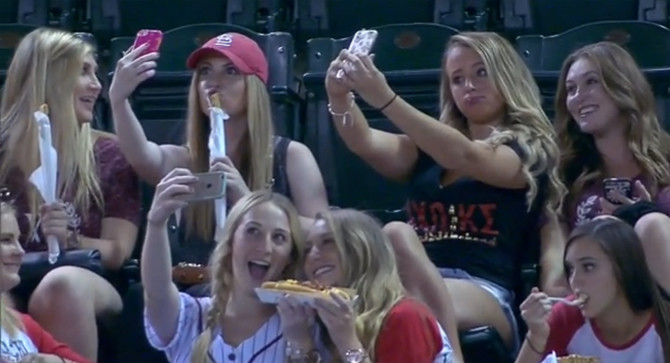 A group of sorority girls went to the MLB game between the Arizona Diamond Backs and the Colorado Rockies on Wednesday, but according to one of the MLB announcers, they might not have seen a single pitch the entire game.

Cameramen at sporting events often turn to film the crowd, but these girls received special attention for being so focused on filming themselves.

“Oh, hold on! Take a selfie with a hot dog. Selfie with a churro. Selfie just of a selfie!”

“Do you have to make faces when you take selfies?”, another asked.

“That’s the best one of the 365 pictures I’ve taken of myself today!”, and many more similar teasing comments were made in a two minute video that went viral.

But first… let us take (lots and lots and LOTS) of selfies.FULL VIDEO: http://bit.ly/1VqCyv9

Another video on 120sports.com also dealt with the video and while most of the comments seemed reasonable, one of the commentators took it a bit too far in my opinion repeatedly pointing out that the selfies with the hotdogs were inappropriate. They seemed completely innocent to me, so maybe the problem was with him rather than the sorority girls.

The video I’m referring to cannot be embedded, so head on over to Sports 120 to see what I’m talking about.

Despite the television teasing, the girls seemed to enjoy the ordeal and even posted a group selfie on their Twitter account and so did the Arizona Diamondbacks:

Yep, we got the experts themselves to take a #selfie on our @Snapchat! (Username: dbacks) pic.twitter.com/2jIS2uqYoC

[via Daily News and 120Sports]